Laura Vivanco
As discussed in my previous post, this is a novel underpinned by a particular moral view, namely that in the face of adversity one should behave in an oysterish manner, and in turn the morality in the novel is based on theology. Mary Balogh once wrote that

I make great claims for love. Occasionally, a reader will accuse me of putting too much faith in its power. I believe one cannot put too much faith in the power of love. The belief that love in all its manifestations (and I speak of love, not of lust or obsession) is the single strongest force on this earth is central to my very being. The universe, life, eternity would have no meaning to me if anyone could prove that something else – evil, for example – was more powerful. Love, I believe, can heal all wounds, pardon all offenses, soothe and redeem the deepest guilt. (1999: 27)

The use of theological terms such as 'faith', 'belief', 'lust' and 'evil' is clearly not accidental here. Balogh is described in North American Romance Writers as being 'involved in her local Catholic Church as an organist and cantor' (1999: 19). In this post I'd like to take a quick look at some of the theology which pervades The Secret Pearl.

Shortly after his encounter with Fleur, Adam misquotes William Blake:

"Every whore was a virgin once." The poet William Blake had written that somewhere, or words to that effect. There was no reason to feel any special guilt over being the deflowerer. Someone had to do it once the girl had chosen her course. If he had been her second customer instead of the first, he would not have known the difference and would have forgotten about her by that morning. (2005: 14) 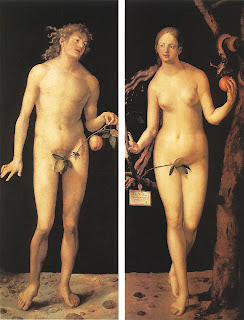 Adam's attempt to rid himself of guilt by placing the blame upon the woman and her choices cannot help but recall the original Adam who declared 'The woman whom thou gavest to be with me, she gave me of the tree, and I did eat' Genesis 3:12. He is also twisting what appears to be the meaning of Blake's poem, To the Accuser Who Is the God of This World, the first verse of which reads:

Truly, My Satan, thou art but a Dunce,
And dost not know the Garment from the Man.
Every Harlot was a Virgin once,
Nor canst thou ever change Kate into Nan. (Wikisource)

According to Alfred Kazin,

The "Accuser" is Satan, who rules this world, which is "the Empire of nothing." It is he who tormented man with a sense of sin; who made men and women look upon their own human nature as evil; who plunged us into the cardinal human heresy, which is the heresy against man's own right and capacity to live. The "Accuser" is the age in which Blake lived and it is the false god whose spectre mocks our thirst for life. It is the spirit, to Blake, of all that limits man, shames man, and drives him in fear. The Accuser is the spirit of the machine, which leads man himself into "machination." He is jealousy, unbelief, and cynicism.

Blake's meaning isn't entirely clear, but it seems to me that he's implying that it's the essence of the woman that is important, and that that is not necessarily changed when her 'garment' is changed from that of 'virgin' to that of 'whore'. Certainly that's the case in this novel: Balogh both demonstrates that Fleur does not become a lesser woman because of becoming a whore and the novel also reveals the hypocrisy of those who judge 'fallen women' harshly while themselves being members of postlapsarian humanity.

"I think he is too good for me," she said. "He can see a clear distinction between right and wrong, and he will stick by what he believes to be right no matter what. I can see too many shades of gray. I would not make a good clergyman's wife." (2005: 330)

When Fleur uses the term 'good', however, she is perhaps meaning that he is 'good in the conventional sense', whereas she herself has a different, more nuanced and compassionate measure by which to judge both herself and others. Here is her response when Daniel asks if she repents of her choice to become a prostitute:

He lifted his head at last, though he did not turn around. "Are you sorry?" he asked. "Have you repented, Isabella?"
"Yes and no," she said steadily after a pause. "I am more sorry than I can say that it happened, Daniel, but I am not sorry that I did it. I know that I would do it again if it were my only means of survival. I suppose I am not the stuff that martyrs are made of."
His head dropped again. "But how can you expect God's forgiveness if you do not truly repent?" he asked.
"I think perhaps God understands," she said. "If he does not, then I suppose I have a quarrel with him." (2005: 316)

Daniel, it seems, would perhaps benefit from reading Matthew 7: 1-5 (which, incidentally, is followed by a verse which mentions pearls):

1. Judge not, that ye be not judged.
2. For with what judgment ye judge, ye shall be judged: and with what measure ye mete, it shall be measured to you again.
3. And why beholdest thou the mote that is in thy brother's eye, but considerest not the beam that is in thine own eye?
4. Or how wilt thou say to thy brother, Let me pull out the mote out of thine eye; and, behold, a beam is in thine own eye?
5. Thou hypocrite, first cast out the beam out of thine own eye; and then shalt thou see clearly to cast out the mote out of thy brother's eye.
6. Give not that which is holy unto the dogs, neither cast ye your pearls before swine, lest they trample them under their feet, and turn again and rend you.

Ultimately Daniel does come to recognise his own hypocrisy:

"I thought," he said, "that it would be possible to love only someone I felt to be worthy of my love. I thought I could love other people in a Christian way and forgive them their shortcomings if they repented of them. But I could not picture myself loving or marrying someone who had made a serious error. I was wrong. [...] I have been guilty of a terrible pride," he said. "It was as if I believed a woman had to be worthy of me. And yet I am the weakest of mortals, Isabella. [...]". (2005: 363-64)

Unlike Daniel, Adam quickly recognises his own sinfulness, and he acknowledges that Fleur is, if anything, less culpable than he: '"If you are a whore," he said, "I am an adulterer. We are equal sinners. But you at least had good reason for doing what you did. [...]"'(2005: 147). He also responds in an extremely orthodox manner to his sin, working through the various stages of the sacrament of penance: 'The Council of Trent (Sess. XIV, c. 3) declares: "the acts of the penitent, namely contrition, confession, and satisfaction, are the quasi materia of this sacrament"' (New Catholic Encyclopedia)

interior repentance has been called by theologians "contrition". It is defined explicitly by the Council of Trent (Sess. XIV, ch. iv de Contritione): "a sorrow of soul and a hatred of sin committed, with a firm purpose of not sinning in the future". (New Catholic Encyclopedia)

Adam's confession of guilt occurs when he admits what he's done both to himself and to his 'sensible and hardworking and discreet' (2005: 57) secretary, Peter Houghton.

satisfaction regards both the past offense, for which compensation is made by its means, and also future sin wherefrom we are preserved thereby: and in both respects satisfaction needs to be made by means of penal works. (Aquinas, Summa theologica)

Adam means to make reparation for his sin by finding Fleur and offering her employment. He himself thinks of it in these theological terms: 'He had done his part to atone both for his sin of infidelity and for his part in setting the girl on the road to degradation and ruin' (2005: 73). In itself, merely giving Fleur employment did not involve him in 'penal works' but he confesses his sin to her, as well as to Houghton and promises to do 'penal works' should this be required: 'if there is ever no one else to whom you can turn, then come to me' (2005: 148), 'I was angry at my own weakness that night, Fleur, and I used you crudely and cruelly. I have much to atone for. I would like to do you a kindness' (2005: 149).

In fact it would appear that Fleur and Adam's sexual sin is actually quite minor because there are extenuating circumstances. Fleur prostituted herself only out of the direst necessity and Adam, in making use of her services, had been seeking 'a release from all the pain and self-consciousness and degradation he had lived with for six years' (2005: 73), 'The need to spend a night sheltered in the arms and body of a woman who would accept him without question. [...] The need for some peace. The need to soothe his loneliness' (2005: 127). In other words, his primary motivation was not lust, though he was guilty of cruelty and anger in his behaviour towards Fleur. Although technically he commits adultery, we eventually learn that his marriage has never been consummated, so there would be grounds for an annulment. In this context, when he and Fleur have a second sexual encounter, again at a tavern, but this time with love existing between them, spiritually if not technically he considers them to be married: 'In one way, Fleur, you will always be my wife, more my wife than Sybil is. And physically I will always remain faithful to you. There will never be any other women in my bed' (2005: 349).

Adam in fact comes to consider his original sin a felix culpa, since it saved Fleur: '"Thank God it was me," he said, his eyes burning into hers. "If it had to be anyone, then thank God it was me."' (2005: 308). This thankfulness for the original sin, given it's outcome, perhaps parallels the way in which the sin of the first Adam with Eve in the garden of Eden was sometimes described as a happy or fortunate sin and one for which people have also thanked God, 'Deo gracias!', because

Blessed be the time
That apple taken was,
Therefore we moun singen.
Deo gracias! (Adam Lay Ybounden, a 15th-century carol)

Fleur similarly feels that 'despite all the pain, despite all the despair, she would not wish to have lived her life without knowing Adam. Without loving him' (2005: 363) and she trusts that 'everything that happens in life happens for a purpose' (2005: 332), though her optimism is qualified by the words 'We become stronger people if we are not destroyed by the troubles of life' (2005: 332).