Feminism and Popular Culture: The Three Musketeers in Newcastle 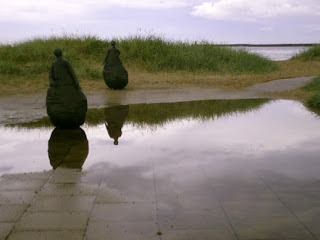 Earlier this year Laura, An and I all went to the 20th Annual Feminist and Women's Studies (UK and Ireland) Association Conference on "Feminism and Popular Culture" in Newcastle-upon-Tyne. What follows is a short summary of the chick lit panel on the first day of the conference.

Fest started discussing the tension in Victorian literature between ideals of femininity and the working woman, and continued to show that the problem femininity vs. working woman also exists in contemporary chick lit. Typically, in chick lit a low-status job denotes a "good woman", whereas higher-status jobs are held by "bad women," and thus importance is still placed on traditional female virtues.

The workplace is usually depicted as cold, cut-throat, and a masculine sphere, which is no proper place for the empathetic heroine. Consequently, career women or simply women who are successful in their jobs are masculinized, or even demonized.

NANNY DIARIES
Because the heroine comes from a loving family, she is suitable for childcare and loving relationships. The novel contrasts the middle-class heroine with the cold and corrupted upper-class villainess, who has got no time for her child.

DEVIL WEARS PRADA
Again, the novel contrasts the good heroine, an all-American girl, with the villainess, a female boss stripped of her human features. According to Fest, the moral of the book is to curb one's ambition, or else you'll lose your soul and femininity.

UNDOMESTIC GODDESS
In this novel, love and femininity are not to be found in London, but in the country, which is another example of the defemininizing influence of the work place.
Thus, chick lit can in many ways be regarded as a backlash against feminism: it is about the Angel in the House instead of girl power.

Montoro chose a stylistic approach to analyse texts, and contrasted the heroine's stance towards feminism with what her voice reveals. The paper certainly brought up a number of good points, but was also terribly flawed in many respects. First of all, Montoro came up with a new term, "cappuccino fiction," because just like cappuccino these books leave a sweet taste in your mouth [her words, not mine!!!]. However, from her definition it didn't become clear why she needed this new term in the first place, or whether the term referred to chick lit or romance or both. Only when she continued with her analysis it turned out the term was meant to refer to chick lit, because she contrasted cappuccino fiction with romance fiction, namely books by Barbara Cartland and typical Mills&Boon [Harlequin, for the Americans] novels. She concluded that heroines of cappuccino fiction are more active than those in typical romance fiction, partly because of the omniscient narrator in romance. [As you can see, it didn't really come as a surprise when she revealed in the following the discussion that she hadn't actually read a romance.]

Serrano analysed the novels by Marian Keyes in order to find out whether chick lit is a profeminist genre or whether it upholds patriarchal values. In order to answer this question she compiled two different lists:

Serrano concluded that chick lit contains both patriarchal and feminist discourses, and that the patriarchal elements have been introduced due to commercial purposes.

It so happened that An Goris and I sat side by side during this panel, which we didn't know at the beginning. We only found out later when I felt the somewhat urgent need to join the discussion and rectify some assumptions about romance, and An figured I must be either Laura or Sandra, since we were the only three romance gals at the conference.