Melissa McClone - Blueprint for a Wedding 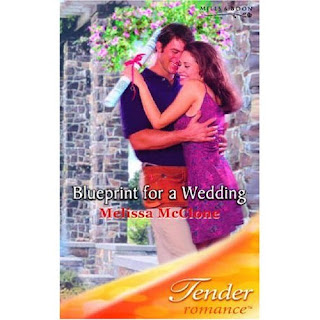 This is my first analysis of a novel with the theme of home is where the heart is, or perhaps, in this particular case, the heart is where the home is, since both Gabriel Logan and Faith Addison have ambitious plans for the

1908 Craftsman-style mansion - the stone-covered pillars, the multi-paned windows, the exposed beams the wraparound porch and the three dormers jutting from the long-sloping gabled roof (2006: 9)

that is the home in question. This isn't a review, so I'll be including plenty of spoilers. If you do want to read a review, there's one available from Romantic Times. I'm not sure why the reviewer felt that 'The characters' motivations don't always ring true', because they seemed understandable to me, but I suppose this is probably a matter where personal opinions will vary. A description and excerpt are available from Melissa McClone's website.

Conflict arises between Gabriel and Faith because both feel they have failed in their emotional lives and for each of them the house represents a last opportunity to succeed with at least part of their life-plans. Gabe

had once thought he had it all figured out. At eighteen, he'd marry his high-school sweetheart, by the time he was thirty, he'd have a minivan full of kids and be living in the Larabee house. Instead he was thirty-two with no wife, no kids and no place to call home [because he sold his house in anticipation of buying the Larabee mansion]. (2006: 12)

Gabe had made a plan and set out to achieve it. He'd married the girl of his dreams right after high-school graduation. Next on the list were children. But his wife hadn't wanted to stay in Berry Patch. He hadn't wanted to leave. So they'd divorced.
But he wasn't about to let his dreams die. [...] He had to remain strong, steadfast, to protect the house from Faith. (2006: 30-31)

Gabe's a builder and his plan which, appropriately enough, he thinks of as 'his blueprint for a perfect life' (2006: 31), is centered around his love for the mansion; his refusal to leave it behind was obviously a significant contributory factor in his divorce. As we shall see, the mansion stands in the way of his relationship with Faith too.

Faith (a movie star) also feels that she's failed and that the mansion is the only way she can achieve something worthwhile:

No one had divorced or even separated during the past two hundred years of her family's recorded history. Faith wasn't about to ruin the streak. She'd failed enough.
Broken engagements. Broken hearts. Broken promises. [...] That's why she'd sunk every penny she had into this B and B project. Renovating an old house had to be easier than finding her one true love. She might not join the ranks of her family who had found their soul mates, but she could certainly join them in their successful hotel business. (2006: 34-35)

The emotional intensity with which they both desire the house means that the story almost becomes a love triangle, with the house taking on the role of a lover for both the hero and heroine. The description of it contains personification: 'a grand lady [...] The most beautiful in Berry Patch, Oregon, and she was supposed to be his' (2006: 9). Gabe's grandfather 'had been obsessed with restoring it for as long as Gabe could remember. It hadn't taken long for him to feel the same way. Each time the bus passed by here on his way to school, his own desire had intensified' (2006: 29-30, my emphasis). When Faith gives Gabe the key to the mansion he thinks that

This wasn't the way he'd planned to get it.
He knew where Miss Larabee kept a spare hidden on the back porch. That's how his crew had gotten inside to take the measurements for the floor plan.
Now, to be given his own key ... but he couldn't forget, it was only temporarily his [...] he watched Faith insert her key into the lock [...]. [...] He wanted her to hate the house. [...] But he knew it wasn't going to happen. Anyone with half a brain would love the house (2006: 42)

Locks and keys have a well-known sexual symbolism: 'In early modern Europe, keys and the locks they penetrate, swords in scabbards, bolts in doors, pestles in mortars, leeks, parsnips, crosiers, apples, pears, figs, carrots, obelisks, and arrows were visual and verbal clues for sex' (Crawford 2007: 1). Freud was of the opinion that in dreams 'penetration into narrow spaces and the opening of locked doors are among the commonest of sexual symbols' (online, see below) and in fairytales such as Bluebeard a key may be 'a phallic symbol which is often emphasized in illustrations as overly sized. The wife is flirting with sexual knowledge and perhaps promiscuity by accepting the key from her husband'. In this context, one can read the passage about the keys in Blueprint for a Wedding as meaning that Gabe wants neither an illicit (using the spare key) nor a short-term relationship with the house. Now, however, he has to watch Faith taking possession of the house that Gabe loves and wanted for himself. And he knows that Faith too will fall in love with it.

Clearly while their love is directed at the house, Gabe and Faith's relationship is going to be in trouble. Faith wants to convert the mansion into a B&B and has made 'glitzy, glamorous and thoroughly modern changes to the remodeling plans. [...] Gabe didn't like the notes or her' (2006: 29). Faith's 'glitzy, glamorous' plans parallel the glitzy, glamorous life she's been leading as a famous movie star. Now, however, she plans a change of career and so she's able to leave glitz behind both professionally, personally 'She wore no makeup, not even lipstick' (2006: 20) and in the remodelling when she agrees with Gabe that the objective is 'to have the place look as if I've never been there and all the work I've done look as if it's been there forever' (2006: 48). Continuing the metaphor of the house as a woman, one can perhaps think of the remodelling as a makeover for a still-attractive woman. As Gabe says, 'The house has good bones' (2006: 59) and he can see it's potential:

"You might not see it, but it's there. Beneath the ugly interior and the horrible remodeling [done by previous owners] and all the snakes and lizards."
When he spoke, his voice had an almost reverent tone, and his eyes softened. Faith felt a tugging on her heart. One day she hoped a man would look at her like that. (2006: 60)

Faith's original plans would perhaps be more like extreme plastic surgery, completely changing some of the original features:

"I want a romantic, fantasy bathroom," she explained. "Marble, double Jacuzzi tub, two-person shower, pedestal sink, gold or brass fixtures."
"Sounds Victorian."
"Yes. [...] The bedroom will match. A brass bed. Lace curtains. Antiques." [...]
His lips thinned. "This house isn't a Victorian. [...] Each room is a piece of the whole and needs to be consistent." (2006: 66)

Gabe has a much less radical makeover in mind: he wants to preserve the original structures, carefully cleanse the skin and then apply some light, natural-looking makeup, '"Craftsman has clean lines, natural materials, warmth," he explained. "Whereas Victorian is ornate, ostentatious, overdone."' (2006: 68). [For comparative purposes, here are pictures of the interior of a Victorian-style B&B, and here are some restored Craftsman-style interiors] Faith eventually decides to keep the Craftsman style, and she joins the rest of the crew in working on the house:

He [Gabe] liked having her around and helping with the work. Her touches made the house better. Faith wanted to turn it into a B and B, but she'd made the house a home. She admired every step of the process and exclaimed over every detail. She'd been an apprentice, interior designer and cheerleader all rolled into one. (2006: 183-184)

The mansion and the remodeling work become a metaphor for the work that Faith and Gabe must both do on their relationship.* The ideas with which they begin the story are their 'blueprint for a perfect life', and these, like the mansion, require remodelling to preserve some of the original features of the plans but also ensure that the final outcome will suit their new needs. As Faith and Gabe work together both literally and metaphorically they learn to compromise in order to find solutions which are acceptable to both of them:

"All we've done on the house is compromise."
It was true. She thought back to that first day. "Victorian versus craftsman."
"Sage-green paint versus celadon."
A smile tugged at her lips. "Drapes versus blinds in the bathroom."
"Compromising wasn't always easy, but by doing it we created something wonderful together." (2006: 225)

Gabe himself makes the comparison between this working relationship and his non-functioning marriage: 'With my marriage, it wasn't like that. I had this idea of the perfect life and pulled Lana into it, never asking what she wanted out of life herself' (2006: 225). As they cooperate on the remodelling, their plans for both the mansion and their lives become more and more similar so that, despite a few crises on the way to finding true love, by the end of the novel they have a 'Blueprint for a Wedding'. They can combine their skills, their ability to work together:

"Home improvement shows are popular. We could take what we both like to do and do a remodeling show together."
She loved the idea. "You'd have to leave Berry Patch to do that."
"Being with you is more important than any town." (2006: 249)

and this compromise demonstrates that their relationship is more important to both of them than the mansion which had previously been the object of their desire.


* Gabe and Faith's relationship is depicted as one of equals. This perhaps first becomes apparent as they become symbolic suitors and competitors for the right to determine the mansion's future but is shown much more clearly when, during the remodeling, Faith is both Gabe's employer, and his 'apprentice' whom he instructs in various building techniques, including the correct way to use a nail gun. Gabe may be a builder, but he's not a macho builder. In fact, his employees in the firm include his sister Kate, who draws up the designs and plans for the work and another sister, Bernie, who's a 'master carpenter [...] Almost as good as [...] My oldest sister, Cecilia [... who] hung up her hammer to follow in our father's footsteps and become a farmer' (2006: 84). It's also Faith who asks Gabe to marry her because 'I haven't had much luck the other way around. I thought I'd try something different" (2006: 249). Also, although Faith has dreams throughout the story of a knight who will rescue her because she is 'lost and cannot find my way home' (2006: 240), and eventually recognises this knight as Gabe, 'her one true love' (2006: 240), when she wakes she doesn't sit passively waiting for rescue: 'She could wait for her knight to find her, or, Faith smiled, she could rescue him herself (2006: 244). She arrives in front of the mansion just as Gabe is about to set out to find her. Gabe is prepared to be thought of as 'Mr Faith Starr', while Faith will 'settle for Mrs. Gabe Logan' (2006: 250) and the two then elope not in Gabe's truck, but in the rather more speedy jet plane that Faith has borrowed from her family's firm.
Posted by Laura Vivanco at Monday, May 14, 2007