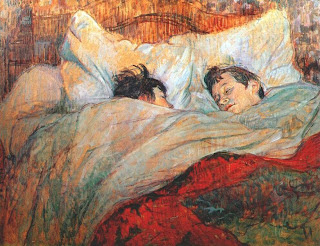 Following on from Eric's post about eros and my own about medical metaphors and the science of love, I thought it might be interesting to take a closer look at the neurobiology of love because, although this topic is not directly related to the romance genre, both have something to tell us about how couples fall in love and form stable pair bonds.

Despite the fact that 'love has myriad variations [...] neuroscientists believe that the basic human emotions and motivations arise from distinct systems of neural activity, networks that derive from mammalian precursors' (Fisher 2006: 88). Fisher goes on to explain that she believes that romantic love is just one of

three discrete, interrelated emotion/motivation systems that all birds and mammals have evolved to direct courtship, mating, reproduction, and parenting. The other two are the sex drive and attachment [...] each interacts with the other two in myriad combinations to produce the range of emotions, motivations, and behaviors associated with all types of love. (2006: 89)

(1) 'The sex drive (libido or lust) is characterized by the craving for sexual gratification; it is often directed toward many partners' (2006: 89).*

(2) 'Attraction (the mammalian/avian counterpart to human romantic love) is characterized by increased energy, focused attention on a specific mate, obsessive following, affiliative gestures, possessive mate guarding, and motivation to win a preferred mating partner [...] In humans, the developed form of animal attraction is known as romantic love, obsessive love, passionate love, or being in love' (2006: 90). **

(3) 'Attachment is characterized in birds and mammals by mutual territory defense and/or nest-building, mutual feeding and grooming, maintenance of close proximity, separation anxiety, shared parental chores [...]. In humans, partner attachment is known as companionate love. Human attachment is associated with the above mammalian traits, as well as feelings of calm, security, social comfort and emotional union with a long-term mate' (2006: 90). ***

The three usually interact, though in differing proportions at different times and for different people, however I have the sense that 'eros', as discussed by Eric, broadly overlaps with what Fisher terms 'romantic love'.

Fisher suggests that 'romantic love is most likely highly addictive' (2006: 100) and she also mentions that 'People fall in love with individuals who are somewhat mysterious, perhaps in part because novelty elevates the activity of dopamine and norepinephrine (2006: 102). Novelty can also increase sexual activity because the 'Increasing dopamine associated with romantic love can stimulate a cascade of reactions, including the release of testosterone, the hormone of sexual desire [...] In fact, elevated activity of dopamine generally increases sex drive, sexual arousal, and sexual performance in humans' (Fisher 2006: 103).

Unfortunately for individuals who crave the feelings created by romantic love, while 'Romantic love can be sustained in a long-term romantic relationship [...] it generally becomes less intense' (Fisher 2006: 99-100). A while ago I quoted from Esther Perel who noticed the problems caused by diminishing romantic love in relationships and proposed a solution:

A fundamental conundrum is that we seek a steady, reliable anchor in our partner, at the same time we seek a transcendent experience that allows us to soar beyond our ordinary lives. The challenge, then, for couples and therapists, is to reconcile the need for what's safe and predictable with the wish to pursue what's exciting, mysterious, and awe-inspiring.
It's often assumed that intimacy and trust must exist before sex can be enjoyed, but for many women and men, intimacy -- more precisely, the familiarity inherent in intimacy -- actually sabotages sexual desire. When the loved one becomes a source of security and stability, he/she can become desexualized. (2003)

Her solution is to retain mystery within a marriage/committed relationship because:

There is in the experience of love an experience of security, of predictability, of safety, a kind of grounding and anchoring. And eroticism thrives on something very different. It thrives on the unknown and the mysterious, on the unexpected. It's not what you want in a long-term, secure relationship. [...] Fantasies are rarely egalitarian, I can tell you that. Friendship is a different story. Best friends share everything, talk about everything. And when you're lovers, you want mystery. I've never in my life called my husband my best friend. (Salon, page 1 and page 2)

It seems to me that for centuries many people have defined themselves by contrasting themselves with an ‘Other’. While the differences between sexual, class, racial and religious groups have been emphasised and exaggerated, in-group differences have tended be minimised. Men, for example, have been associated with ‘masculine’ characteristics and behaviours, while women have been associated with the opposing ones. This automatically builds in a sense of difference and distance, and preserves identity, and in the context of romance I took a quick look at race (including the appeal of sheiks in romance) a while ago.

It struck me that the preservation of mystery advocated by Perel is, in some ways, the emotional equivalent of high mimetic love scenes between a perfectly beautiful heroine and the dangerous, mysterious hero she must tame. Dramatic conflict, big actions and big differences do ramp up the emotion and approach Frye’s ‘high mimetic’, which ‘seems to be connected [...] with [...] myth’ (Frye 2000: 51). What Perel describes isn't, however, the emotional equivalent of the earthy realism Angel and I were discussing in the comments attached to my post about food in Joyce's The Veil of Night. There I quoted from a post at Lust Bites, written by Nikki Magennis, who argues that ideal beauty may in fact be less sexy than the intimacy and variety of flawed individuality:

Really, all Beauty is fit for is preserving behind glass. It’s dazzling, sure, and we shrink before it. [...] Sexy is about revealing our real self, gloriously flawed. It’s not about struggling to erase all the signs that show one is human in the pursuit of a mathematically perfect ideal.

What Magennis is doing perhaps, is redefining beauty so that it can include the beauty that differs from the ideal. Similarly Cristina Nehring agrees with Perel that difference is central to eroticism but suggests much less dramatic, striking solutions to preserving it:

We must be two before we can be one, said Ralph Waldo Emerson. To merge most passionately, we must first be defiantly distinct. The question becomes how to maintain such distinctness in a long-term relationship. [...] Too quickly we assume we understand the persons we love, and put them into categories. Because we know how they take their coffee or turn over in bed, we think we know their emotional or moral turbulences, their secret judgments, recurrent temptations. It is revelatory -- because re-estranging -- to encounter our closest companions in contexts unlike those in which we usually confer. The novelist Siri Hustvedt writes of the thrall that overcomes her when she sees her husband, Paul Auster, at a public ceremony. Many a tired husband is shocked when he suddenly sees his wife dance -- or flirt, or fight, or take command, or write a poem.
We all, as Walt Whitman said, contain multitudes. It is salutary to remember this, salutary to encourage this, salutary -- even -- to know this is encouraged, so that we remain unafraid to surprise.


* I watched the Eurovision 2007 entries and Poland's entry, by The Jet Set seems to focus on the libidinal aspects of human relationships.

** Successful romantic love finds its expression in the song by Greece's Sarbel, in which the singer believes that his beloved, Maria, is unique and supremely desirable. Given her name and the setting/choreography, I can't help but wonder if this song is paying tribute to West Side Story (though without the tragic outcome). Fisher also goes on to describe the devastating consequences for rejected romantic lovers, and this situation is the one sung about by Finland's Hanna Pakarinen. Rejected lovers often feel rage as well as suicidal urges.

*** Mary Wells, singing 'My Guy', seems to me to be describing the comfort and closeness of companionate love.

Seeing as I've mentioned so many other Eurovision entries, I'd like to mention just one more. Bulgaria's Elitsa Todorova & Stoyan Yankoulov performed a song which made me think of the vampires and fallen angels which seems so popular in romance at the moment.

The picture is by Henri de Toulouse-Lautrec, from Wikipedia.
Posted by Laura Vivanco at Tuesday, May 29, 2007