Lydia Joyce - The Veil of Night (1: Home and Heart)

Lydia Joyce 'achieved bestsellerdom with The Veil of Night' (Publishers Weekly), her first published novel. Here are some reviews: an extremely positive one from A Romance Review, a fairly good one from All About Romance, and a not quite so positive one from The Romance Reader. You can also find an excerpt here.

As usual, this is not a review, and I may include spoilers. I want to focus on just one aspect of the novel: the imagery and symbolism of buildings.

The first chapter opens with the words

Graceless and sprawling, Raeburn Court was a pile of mottled limestone atop the bald hill. Lady Victoria Wakefield spied it while the coach was still some distance off, and she watched it steadily as they approached the park gate; after all, there was nothing else in the bleak landscape to catch her eye. As they drew near, the squat manor house grew only more blunt and ugly, its saw-toothed crenellations pierced by random, unbalanced spires stabbing the slate-gray sky. (2005: 3)

It would appear to match its master, Byron Stratford, Duke of Raeburn. The Court is 'sprawling' and when we first meet Byron he reclines at his ease, waiting for Lady Victoria's approach and later his signature 'sprawled across the sheet' (2005: 27), a word which appears again in another description of the house of which he is the centre: 'there was more unknown in the room behind her [where she has left Byron] than in all the rest of the sprawling, rotting manor house' (2005: 28).

During that first encounter Byron's 'presence filled the room' (2005: 24) in the same way that his house dominates the surrounding terrain, while his eyes match the colours of the landscape, 'brown or moss-coloured' (2005: 25). Joyce describes him in architectural terms:

The lineaments of his face were bold and strong - almost crude, as if he'd been blindly carved of stone - but they were no less attractive for a lack of patrician daintiness. How old he was she could not guess: certainly younger than the roughened skin of his face suggested. It was not marked with the scarring left by youthful blemishes but with a deeper weathering, as if he had stood barefaced to wind and sun for a score of years. [...]
His appearance was certainly unconventional, but it was also compelling (2005: 25, my emphasis)

Externally, then, Raeburn Court matches the appearance of its master. As for the interior, it parallels Byron's reputation:

Victoria took the opportunity to survey the room. The vast, unlit chamber stretched before her--the manor's original great hall, no doubt--its deep shadows scarcely pierced by the gray light filtering through the filthy mullioned windows, which trembled in their frames as another peal of thunder cracked overhead. Ancient, moldering tapestries flapped like living things in the steady draft flowing through the room, and enormous cobwebs fluttered against the black rafters in the dim recesses of the ceiling. (2005:7-8)

Such decay and neglect might seem to indicate Byron's immorality. He has a 'well-deserved reputation for being a dissolute reprobate' (2005: 12). Lydia Joyce provides the online equivalents of footnotes to the text, and one of those notes states that Raeburn Court,

has no "real world" model. I didn't like the traditional castle-ish construction so common in Gothics, so instead, I made it a mishmash of styles from many periods, which would give it a suitable spookiness without following the cliché too closely.

That unconventional 'mishmash of styles' might in architectural terms make the isolated Court not dissimilar to Byron who's 'a pariah not because of the acts he committed but because of the conventions he failed to keep' (2005: 4).*

Despite the apparent similarities between Byron and Raeburn Court, he only intends living there until the renovation of the Dowager House is complete. Victoria thinks it 'Strange that he should want to leave a house that seemed to suit him so well' (2005: 37), but Byron has reached the conclusion that it 'had been inhabited far too long by other men who had left their impressions upon it more indelibly than he could ever hope to. That was the secret of Raeburn Court, he had finally decided; it always made one feel a stranger' (2005: 72).

While the Court may resemble Byron's exterior appearance, it is the Dowager House which, as Victoria quickly realises, represents his inner life: 'She had the growing sensation that the house was a portrait of the duke, done in such precise detail that every idiosyncrasy in his nature was laid bare, if only she knew how to look at it.

Commenting on the Dowager House, Joyce admits that

I am an architecture freak. [...] Philip Speakman Webb [the architect] was part of the aesthetic movement in architecture that eventually birthed the Arts and Crafts style. In its early forms, it was simple and medievalist, though it had a number of characteristics that any Craftsman enthusiast would immediately recognize and appreciate. I wanted something that worked for Byron and spoke of who he was, and this movement really spoke to me. [click here for a short biography of Speakman Webb and links to photos of some furniture he designed]

The Dowager House 'speaks of who Byron is' because it combines the historical and the modern, making use of rich colours which are in keeping with Byron's connection with his lands:

She stood at the midpoint of a long, narrow chamber, once a hall, now divided by furniture and rugs into two distinct parlors decorated in tones of scarlet, purple, and umber. Like a Yorkshire sunset, she thought [...].
She crossed into the parlor [...] noting the heavy, simple lines of the furniture and the archaic paintings that hung on the walls. But the most striking feature was the narrow stained glass windows that flanked the fireplaces at the ends of the hall, four jewel-toned glowing pictures of slender, long-faced women with intricately draped robes and tumbling hair. [...]
"It is very different," she said. [...] "Most people would have made the house lighter, more delicate. This seems positively medieval." (2005: 86)

It is, literally 'positively medieval'. In Victorian medievalism

"[...] The Middle Ages were idealized as a period of faith, order, joy, munificence, and creativity [...] The Middle Ages became a metaphor both for a specific social order and [...] for a metaphysically harmonious world view. [...]" Chandler [...] convincingly shows us how the nineteenth turned back to the past as a way of criticizing the present and as a means to a better future. (Landow, quoting Chandler, 1973: 366)

I can't help but think that the stained-glass of the house (as contrasted with the covered windows of the Court) represent Byron's spirituality. He may appear evil to those who judge on appearances and he has 'behaved with the flamboyance of a born reprobate' (2005: 100) and encouraged all the 'mysterious rumors' (2005: 100) about him, but in truth it is simply the case that for him the seeing 'through a glass, darkly' (1 Corinthians 13: 12) is literal as well as metaphorical.

In addition, it becomes clear that Byron's medievalism extends to his attitude towards his tenants. The estate is in some difficulty as a result of the Industrial Revolution:

"I can't even find tenants for two tracts, and I've had to cut the rent on the others. There's not the money in wool there used to be, and the Raeburn flocks are poor at best. [...] Stoneswold and Weatherlea are half deserted because the weaving is all done in factories in Leeds. The weavers' families have all left or been reduced to menial labor."
Victoria realized that he cared - not just about property and income, but about the common villagers, too. There was perhaps something medieval in his concern, but if it was stained with feudal overtones, it had a certain chivalric element as well and was rather touching. (2005: 108)

While Byron's exterior appearance and his inner soul are symbolised by the two houses, Victoria, who owns no houses, nonetheless has a similarly deceptive 'façade of imperturbability' (2005: 10) which is later replaced by clothing which more accurately reflects her real personality. As far as society is aware, Victoria is what she appears to be:

she was fair [haired] and dowdy [...] austere to the point of severity [...] almost fiercely self-contained. [...] Every line of her bearing declared that she was a respectable old maid, from her tight, pale blonde bun and her prim, haughty smile to the hideously unflattering carriage dress. (2005: 11)

No-one apart from Victoria knows that her clothes 'had been marked by unrelieved austerity for fifteen years now, first from an excess of puerile anguish, then from self-abhorrence, and now partly from habit and partly from the intangible security such a uniform offered' (2005: 5). Byron, however, quickly notices that: 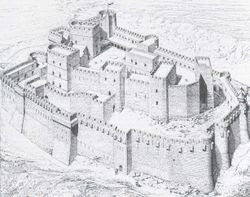 From the back, not even the awkward lines of her unflattering corset could disguise the grace of her lithe figure, the unconscious seductiveness in the arch of her neck.

The prim dress and severe bun angered him suddenly. He saw them thrust between them as a barrier, keeping him beyond her spinsterish defenses. (2005: 19)

The crinoline and corset are 'defences': the dress and crinoline forming the outer walls, while the corset is an inner barrier, all demonstrating the severe austerity of a medieval castle. Byron is sure that Victoria has chosen to 'lock herself' (2005: 22) within them and looks at her with a 'proprietary gleam [...] in his eyes, that of a lord surveying territory soon to be his' (2005: 40). He senses that which is hidden within her walls: 'the soul of the wind-mad woman who escaped the stifling parlors and drawing rooms of Rushworth Manor to gallop across the tenants' most distant fields' (2005: 22). What he doesn't realise is that Victoria has 'locked herself' within the citadel of her clothing because, 'There was no barrier, no stronghold of virginity to interrupt his entrance' (2005: 66-67).** What she had hidden within the fortress of her austere clothing was not her virginity, but her sexuality, and when Byron buys her new clothes 'there was a native sensuality that permeated the air about her now that she no longer imprisoned it behind walls of whalebone and black taffeta' (2005: 79, my emphasis).


* Regarding the 'mishmash' of styles:

The first time he'd seen the building [...] he'd seen the hideousness of it, the sprawling wings of every imaginable age of architecture appended to the main mass of limestone at haphazard angles. Yet even then, it had called to him. Even then, it had whispered of secrets and darkness and ancient passions burned into the rock. (2005: 72)

I apologise for using the Foster Gittes, and Landow's review of Chandler's book. I could no doubt have found more authoritative texts dealing with these subjects, including Chandler's book, but as I'm blogging rather than writing an academic paper, I tend to use sources I can access via the internet.

The picture on the cover of the book is taken from 'a photograph of a famous mission in Arizona'.

The castle is Krak des Chevaliers, a '"concentric castle" in which each ward was placed wholly within another which enveloped it' (Wikipedia). It 'was built by the Hospitaller Order of Saint John of Jerusalem from 1142 to 1271' and is now a World Heritage site.
Posted by Laura Vivanco at Saturday, May 19, 2007