At last the RWA have an African-American winner of a RITA and, Fresh Fiction reports, the news was received with a standing ovation. 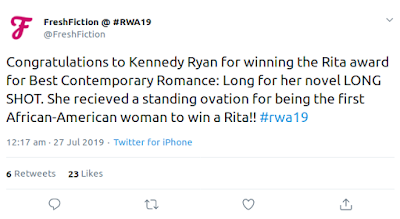 As Dee Carney pointed out, it's been a long wait. 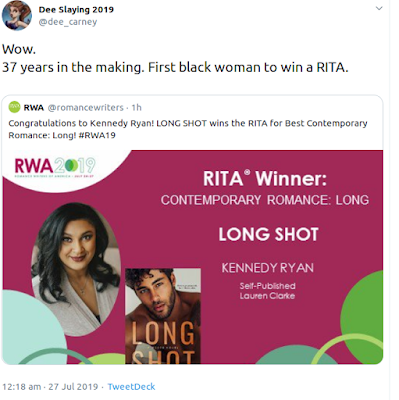 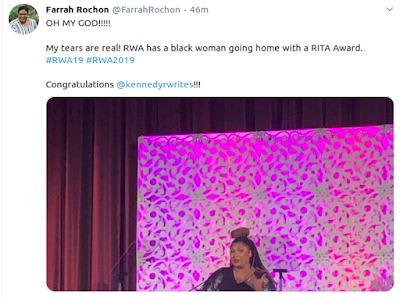 Not much later, I'm happy to be updating this post because it was announced that M. Malone had also won a RITA (for Best Romance Novella):

And reactions from the winners themselves:


Wow. What is this life, man??? I’m still reeling from this night. I was so humbled and honored to be a part of history. No black woman has won in the 37-year history of the RITA Awards. Please do not believe I am the first one to deserve it. There are so many whose stories were unsung and overlooked. I’m hoping today ushers in a new season of inclusion. Thank you to my tribe of women who lift me when I’m down and encourage me daily. Somebody pinch me!!!

And from Minx Malone: 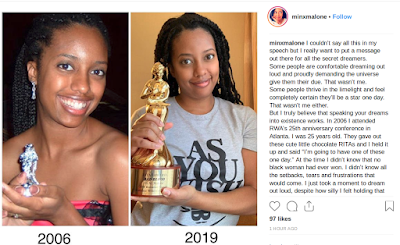 I couldn’t say all this in my speech but I really want to put a message out there for all the secret dreamers.
Some people are comfortable dreaming out loud and proudly demanding the universe give them their due. That wasn’t me.
Some people thrive in the limelight and feel completely certain they’ll be a star one day. That wasn’t me either.
But I truly believe that speaking your dreams into existence works. In 2006 I attended RWA’s 25th anniversary conference in Atlanta. I was 25 years old. They gave out these cute little chocolate RITAs and I held it up and said “I’m going to have one of these one day.” At the time I didn’t know that no black woman had ever won. I didn’t know all the setbacks, tears and frustrations that would come. I just took a moment to dream out loud, despite how silly I felt holding that little chocolate up to the camera.
Now it is 2019 and I’m attending RWA’s 38th conference. I am 38 years old. And I got to stand on stage last night and make history with the amazing @kennedyryan1 as the first black women to ever win.
So go out there and dream loud and proud. Even if it makes you feel silly. Apparently the universe listens sometimes.