Essays on Outlander (Forthcoming) and a Thesis on Thai Romance 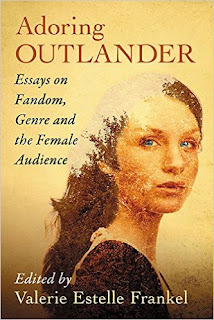 Due out at the end of July this year is Adoring Outlander: Essays on Fandom, Genre and the Female Audience, edited by Valerie Estelle Frankel and published by McFarland and Co. According to details provided by the editor, it will include:


Part II: The Romance Question: Is it or Isn't it?

" 'Linked ... through the body of one man': Black Jack Randall as a Non-traditional Romance Villain", Michelle L. Jones, University of Regina

Khuankaew, Sasinee, 2015.
"Femininity and masculinity in three selected twentieth-century Thai romance fictions." Ph.D thesis, Cardiff University.
The main purpose of this study is to examine a popular Thai genre of the novel, romance fiction, with a focus on the modes of subjectivity and discourses of femininity and masculinity to be found in Thai romance novels between the 1940s and 1990s. The thesis also seeks to locate the various socio-cultural contexts of Thai society, which influence the constitution of Thai gender relations and the transformation of gender norms. Additionally, it attempts to address the issue of the usefulness of Western theories of gender and romance, which are widely regarded in Thailand as tools of Westernization and new forms of colonialism. This study suggests that Thai gender relations are complicated, since there are several disparate aspects that influence the constitution of male and female subjectivity. Western influence is one of these aspects that help define femininity and masculinity, while domestic beliefs also play a salient role as palimpsests that are not easily erased. Thus, the representation of various modes of gendered subjectivity in romance fiction concurrently indicates both changes in and the reproduction of discourses that define an „essence‟ of gender identity that accords with traditional Thai cultural beliefs including the deep-rooted idea that the primary purpose of writing is didactic.  (More details here)

and not on the Wiki, since it's not a dissertation/thesis and isn't focused on romance:

"To be honest, I used to think the period when I read so many romance novels was worthless. However, while I am writing this essay and taking an entirely new look at how novels influenced me, I have realized that even these popular novels, which are often underestimated, actually improved my critical thinking ability and my rhetorical ability."