"Love Between the Covers": LA Showings and Online Promotions 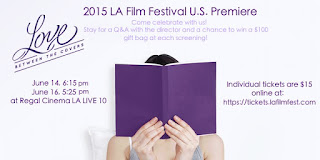 The U.S premiere of Laurie Kahn's documentary film Love Between the Covers, for which I served as a scholarly adviser, is coming up soon at the LA Film Festival. Laurie's asked me to help get the word out, and I'm happy to oblige.

Love Between the Covers will be showing at the Regal Cinema LA LIVE 10 in downtown LA, with two showings available:

Tickets are on sale now at the LA Film Festival website  and they cost $15. Anyone who comes to a screening will be eligible to win a Love Between the Covers tote bag filled goodies worth $100.

In addition, Laurie is doing a special promotion to help get the word out about the film.  Evidently anyone who retweets or shares the e-card that Love Between the Covers has posted on Twitter and Facebook with information about the two screenings will be eligible for $100 USD of books from her/his favorite bookstore!  (I don't know whether this applies only to folks in the United States--I don't see why it should, but you can use Twitter and Facebook to ask.)

If you'd like to learn more about the film, you can find out much more at lovebetweenthecovers.com. The audience at the Love Between the Covers international premiere at Toronto's Hot Docs International Film Festival loved the film, Laurie reports:  here's her link for the press the film has gotten.