Claire Langhamer's The English in Love: The Intimate Story of An Emotional Revolution was published at the end of August and


covers the period from the end of the First World War until the break-up of The Beatles.

To the casual observer, this era was a golden age of marriage. More people married than ever before. They did so at increasingly younger ages. And there was a revolution in our idea of what marriage meant. Pragmatic notions of marriage as institution were superseded by the more romantic ideal of a relationship based upon individual emotional commitment, love, sex, and personal fulfilment.

And yet, this new idea of marriage, based on a belief in the transformative power of love and emotion, carried within it the seeds of its own destruction. Romantic love, particularly when tied to sexual satisfaction, ultimately proved an unreliable foundation upon which to build marriages: fatally, it had the potential to evaporate over time and under pressure.

It doesn't have much to say about popular romance fiction, but as a result of reading it I did have a few thoughts about historical romance, and also about the extent to which the genre as a whole has reflected beliefs about love and marriage. 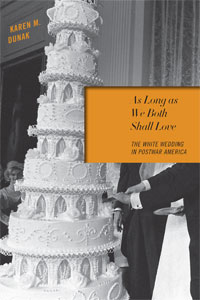 I haven't yet read Karen M. Dunak's As Long as We Both Shall Love: The White Wedding in Postwar America, which was also published this August, and even though it doesn't seem to have much to say about romance novels either, it too made me think about popular romance (evidently I've got a one-track mind when it comes to research).

Dunak argues that "Despite being condemned by some critics as “cookie-cutter” or conformist, the wedding has in fact progressively allowed for social, cultural, and political challenges to understandings of sex, gender, marriage, and citizenship" and I think one could make much the same argument about popular romance fiction. Similarly, I think you could substitute "romance novel" for "wedding" in the following: "While many elements of the wedding, from the symbolic meanings behind its 'traditional' components to the way it is marketed, deserve questioning and critique, too many evaluations have ignored the possibilities the wedding offered its celebrants" (5).

An excerpt is available via Google Books and an excerpt from Chapter 5, on same-sex weddings, was published at Salon. Here's an excerpt of that excerpt:


While it is impossible to know the actual number of committed gay and lesbian couples during the 1950s and 1960s, queer marriages existed in the immediate postwar decades and in the years before the official start to Gay Liberation. [...]

Mary Mendola, a writer “married” to another woman, conducted an investigation in the late 1970s to determine just how many same-sex couples existed. The resulting publication, The Mendola Report, while hardly scientific, proved that gay men and lesbians resided together as married couples throughout the United States. Using only an informal network of gay and lesbian contacts, Mendola found 1,500 potential couples to survey and received an astonishing 27 percent return on her distribution. Of her return sample, 67 percent of respondents described themselves as permanently committed or “married.”

Langhamer, Claire. The English in Love: The Intimate Story of An Emotional Revolution. Oxford: Oxford UP, 2013.
Posted by Laura Vivanco at Sunday, September 15, 2013