And this seems somewhat familiar too 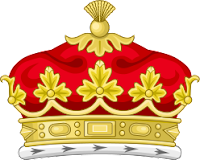 In 2013 it sometimes seems as though when it comes to historical romances, only a duke will do. In contemporaries it helps if a hero's got fifty shades of greenbacks.

This is, apparently, nothing new. Here's William Dean Howells lamenting the taste of the American reading public in 1891 because they have a preference for:


something select, something that treats of high life, like those English novels which have chiefly nourished us; or something that will teach us how to escape the life of toil by a great stroke of business, or by a splendid marriage. What we like to read about is the life of noblemen or millionaires; that is our romance; and if our writers were to begin telling us on any extended scale of how mill hands or miners, or farmers, or iron puddlers really live, we should very soon let them know that we did not care to meet such vulgar and commonplace people. 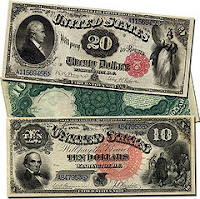 As far as I can tell, this was first published in Harper's New Monthly Magazine 83, on page 965 but unfortunately I couldn't access it. This excerpt comes from Rob Davidson's The Master and the Dean: The Literary Criticism of Henry James and William Dean Howells.


The image of the ducal coronet was created by Sodacan and came from Wikimedia Commons. The "Large-sized Series of 1880 United States Notes; the $20 note displays Alexander Hamilton and a red scalloped seal, and the $10 Daniel Webster and a large red spiked seal" came from Wikipedia.
Posted by Laura Vivanco at Wednesday, September 25, 2013