Steaming into a Victorian Romance 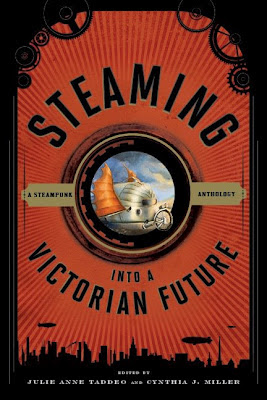 Steaming into a Victorian Future: A Steampunk Anthology will shortly be published in hardback by Scarecrow Press (I think the ebook version is out already) and it contains a couple of articles which discuss steampunk romances:

Here's what the publishers have to say about the volume as a whole:


A popular sub-genre of fantasy and science fiction, steampunk re-imagines the Victorian age in the future, and re-works its technology, fashion, and values with a dose of anti-modernism. While often considered solely through the lens of literature, steampunk is, in fact, a complex phenomenon that also affects, transforms, and unites a wide range of disciplines, such as art, music, film, television, fashion, new media, and material culture.

In Steaming into a Victorian Future: A Steampunk Anthology, Julie Anne Taddeo and Cynthia J. Miller have assembled a collection of essays that consider the social and cultural aspects of this multi-faceted genre. The essays included in this volume examine various manifestations of steampunk—both separately and in relation to each other—in order to better understand the steampunk sub-culture and its effect on—and interrelationship with—popular culture and the wider society. This volume expands and extends existing scholarship on steampunk in order to explore many previously unconsidered questions about cultural creativity, social networking, fandom, appropriation, and the creation of meaning.

And if anyone could tell me what the number is for the last page of Dru Pagliassotti's essay, I'll be very grateful and update the details at the Romance Wiki bibliography.
Posted by Laura Vivanco at Wednesday, October 03, 2012