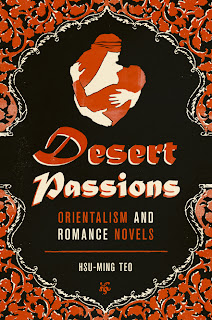 Desert Passions: Orientalism and Romance Novels by Hsu-Ming Teo will be published by the University of Texas Press in November:


The Sheik—E. M. Hull’s best-selling novel that became a wildly popular film starring Rudolph Valentino—kindled “sheik fever” across the Western world in the 1920s. A craze for all things romantically “Oriental” swept through fashion, film, and literature, spawning imitations and parodies without number. While that fervor has largely subsided, tales of passion between Western women and Arab men continue to enthrall readers of today’s mass-market romance novels. In this groundbreaking cultural history, Hsu-Ming Teo traces the literary lineage of these desert romances and historical bodice rippers from the twelfth to the twenty-first century and explores the gendered cultural and political purposes that they have served at various historical moments.

Drawing on “high” literature, erotica, and popular romance fiction and films, Teo examines the changing meanings of Orientalist tropes such as crusades and conversion, abduction by Barbary pirates, sexual slavery, the fear of renegades, the Oriental despot and his harem, the figure of the powerful Western concubine, and fantasies of escape from the harem. She analyzes the impact of imperialism, decolonization, sexual liberation, feminism, and American involvement in the Middle East on women’s Orientalist fiction. Teo suggests that the rise of female-authored romance novels dramatically transformed the nature of Orientalism because it feminized the discourse; made white women central as producers, consumers, and imagined actors; and revised, reversed, or collapsed the binaries inherent in traditional analyses of Orientalism.

Here's what Eric has to say about it:


“Desert Passions is a groundbreaking study. No other book has studied mass-market romance fiction at length through this lens (Orientalism); the studies that exist are short papers that do not treat the subject with anything close to the historical depth or contextual richness this book provides. Teo demonstrates that this strand of contemporary mass-market romance fiction can profitably be read as part of a tradition that stretches back several centuries, and which includes high, middle, and lowbrow texts: a significant achievement. . . . I find Teo’s treatments of the rise of the desert romance, The Sheik, The Kadin, and several category romance novels to be exemplary work, the kind that sets a standard for future scholarship. . . . This book promises to be a major contribution to the field.”

The book can currently be pre-ordered at a significant discount from the University of Texas Press and from the Book Depository. An excerpt is available via Google Books.
Posted by Laura Vivanco at Saturday, October 13, 2012