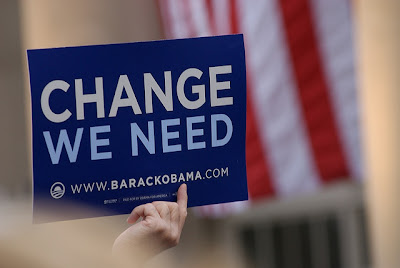 Change is key to the development of a romance. You can't have a romance without a "Central Love Story," that love story "centers around two individuals falling in love and struggling to make the relationship work" (RWA), and so, by definition, the relationship changes over the course of the novel. That kind of change, to borrow one of President Obama's campaign slogans, is the "Change We Need."

That may not, however, be the only kind of change some readers need. When SmartBitch Sarah recently gave Georgette Heyer's The Grand Sophy a "D" grade I wasn't at all surprised that this was partly due to the anti-Semitic portrayal of Goldhanger, the Jewish moneylender. We have, after all, discussed that before here at TMT. I was, however, surprised by the following criticism of the novel:

Sophy doesn’t change or grow or evolve. She gets her way, and everyone around her is probably better off for her involvement, and they’re all happy, but Sophy doesn’t develop. She achieves through her own machinations, which, while entertaining, was not as satisfying as having her develop or grow as a character.

Although I had noticed that, in many romances, both the hero and heroine are greatly altered by the end of the novel, it had never occurred to me that change in the protagonists was necessary to any readers' enjoyment of romances. With this revelation still in the back of my mind, I came across the following:

When our immigrant ancestors arrived on America's shores they hit the ground running, some to homestead on the Great Plains, others to claw their way up the socio-economic ladder in coastal ghettos. Upward mobility, westward migration, Sunbelt relocation - the wisdom in America is that people don't, can't, mustn't end up where they begin. This belief has the moral force of religious doctrine. Thus the American identity is ordered around the psychological experience of forsaking or losing the past for the opportunity of reinventing oneself in the future. (Engle 337)

While there are likely to be plenty of non-American readers who have a preference for protagonists who change a lot, I wonder if the romance genre, as it has developed in North America, does tend to reflect the belief "that people don't, can't, mustn't end up where they begin."

Virginia Kantra, for example, states that

At the center of every story is a protagonist who wants to do, accomplish or change...something. In pursuit of his goals, our protagonist must struggle, learn and grow to become a more self-realized, self-reliant, autonomous character. This is the character arc.

But as readers and writers of romance, we expect, we celebrate, the development of the pair bond from attraction through exploration to emotional intimacy and sex. This is the romance arc. [...]

As romance writers, our job is to develop all three arcs, the hero's, the heroine's, and the relationship's, in an emotionally satisfying way.

Jennifer Crusie found the genre powerful and important because it

gave me female protagonists in stories that promised that if a woman fought for what she believed in and searched for the truth, she could strip away the old lies about her life and emerge re-born, transformed with that new sense of self that’s the prize at the end of any quest. And when the heroine emerges transformed from the romance story, so do I. So do all romance readers.

Leslie Wainger, author of Writing a Romance Novel for Dummies and Harlequin editor believes that

Static characters are boring: Your heroine (and yes, your hero, too) can't remain static over the course of the book. As the plot progresses, you need to make your heroine develop, change, grow, and discover things about herself and her abilities — especially how to love and live with her hero. If your heroine starts out perfect, she has nowhere to go. But if she has insecurities, past failures to put to rest, doubts about herself and her abilities, or an out-and-out bad habit — maybe a quick temper, or impatience that leads to rash, unwise decisions — she has room for progress, and readers will want to see how she masters the challenges of the plot and the romantic relationship.

I'm still not convinced, though. If the characters are intrinsically interesting, why do they need to change? Isn't it enough to see how their relationship develops? In Heyer's The Nonesuch, for example, neither the heroine nor the hero become "more self-realized, self-reliant." They don't change their personalities; what changes is how they feel about each other. And, as Sunita recently said,

For readers who enjoy context and setting, this novel has a lot to offer. There isn’t much in the way of plot: Ancilla and Sir Waldo slowly fall in love; Linden’s initial adoration of Tiffany dissipates and he moves on to a deep, long-lasting love for a more appropriate object of his affection; and Tiffany eventually gets her comeuppance, in a way that engenders some sympathy from the reader.

One of my favourite romances (as I've said many times) is Austen's Persuasion in which, when Captain Wentworth observes that

"You were not formerly, I know. You did not use to like cards; but time makes many changes."
"I am not yet so much changed," cried Anne, and stopped, fearing she hardly knew what misconstruction. After waiting a few moments he said - and as if it were the result of immediate feeling - "It is a period, indeed! Eight years and a half is a period!" (Chapter 22)

The years have made Anne more confident in her own judgments but in the essentials of their personalities, she and Wentworth remain basically unchanged:

they exchanged again those feelings and those promises which had once before seemed to secure everything, but which had been followed by so many, many years of division and estrangement. There they returned again into the past, more exquisitely happy, perhaps, in their reunion, than when it had been first projected; more tender, more tried, more fixed in a knowledge of each other's character, truth, and attachment; more equal to act, more justified in acting. (Chapter 23)

The changes in their circumstances which make it possible for them to marry are more than enough change for me, and what change there has been in their personalities is the sort of gradual change I can believe in.

What kind(s) of change do you need in a romance and what makes it change you can believe in?

The first photo, of "Change We Need" was taken by snowmentality and downloaded from Flickr under a Creative Commons licence. The second image, of "Change We Can Believe In," came from Wikimedia Commons.