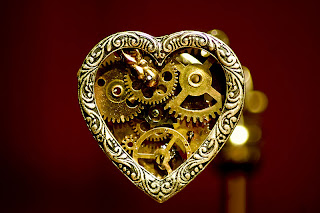 Steampunk is, according to Romantic Times' Morgan Doremus, "still a relatively new sub-genre in the paranormal/fantasy category" but Heather Massey believes that

Steampunk romance is a subgenre that’s ripe for exploring. I’m surprised it hasn’t happened before now to any great degree. While steampunk-as-argument generally explores many dark themes in the science fiction arena, it’s the Edisonade components of the genre that have the most potential to bear succulent fruit when paired with romance.

The sub-genre may still be relatively small but it's growing, as demonstrated by Meljean Brook's Steampunk Romance Week, so I thought some of TMT's readers might be interested in the following call for papers:

Steaming into a Victorian Future: A Steampunk Anthology

We are seeking contributors for a collection of critical essays on Steampunk. Steampunk remains an elusive topic even among its admirers and practitioners, but at its heart, it re-imagines the Victorian age in the future, and re-works its technology, fashion, and values with a dose of anti-modernism. From sci-fi and fantasy to websites catering to a Steampunk lifestyle, this multi-faceted genre demands greater scholarly analysis.

The editors of this anthology seek contributions in the following suggested subject areas:

Submission Guidelines: Send a 1000 word abstract in Microsoft Word by email attachment on or before August 15, 2011.

The photograph (downloaded from Wikimedia Commons) is of a "Steampunk heart pendant made [and photographed] by Vaughn & Sean Saball."
Posted by Laura Vivanco at Thursday, June 30, 2011