"A whole load of sass" 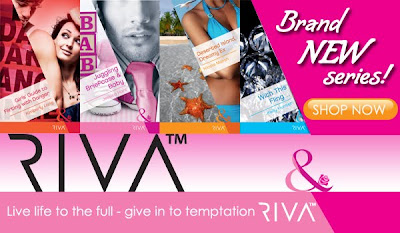 In the UK Mills & Boon has created a new line: "Launching in January 2011, Riva is a vibrant, exciting new stream of editorial" which promises "sparky, sassy stories." I'd like to share my thoughts about the line after having read 25% of the first month's output. Admittedly that's only one book, and "Our top editor tip" is that "there is no better way to fully understand the Riva experience than to read as many of them as possible!" but at the moment there have only been 4 novels published in the line, and I have to assume that the editors were very careful when choosing them. After all, these four novels introduce the line to Mills & Boon's readership. One would hope, therefore, that for this launch month the editors selected novels which were representative of the line. There are apparently two main types of Riva novel, but both share a focus on "today's young woman":

If you like your stories hot & steamy...
Then you’ll love the Rivas written by original, fresh authors such as Heidi Rice, Natalie Anderson, Kelly Hunter, Kimberly Lang, Anne Oliver, Anna Cleary and Lucy King, formerly published in Mills & Boon Modern Heat. These entertaining romances reflect the life experiences of today’s young women, within a chic, glamorous, and usually urban setting. The[y] offer international glamour, passion and alpha male heroes you expect from Modern, with a flirty young voice and a whole load of sass. The heroines are often your twenty-something girls-about-town but there's no compromising on the hero: he must be very alpha and absolutely to die for. There’ll be sparks flying when these two meet – and nothing short of fireworks once they get to the bedroom!

If you like your stories flirty & sweet...
Then you’ll love the Rivas written by flirty, young voices such as Liz Fielding, Nina Harrington, Fiona Harper and Jackie Braun, formerly published in Mills & Boon Romance. These stories should reflect the experiences of today’s young women – whether it be dating disasters, juggling a work/life balance or overcoming a broken heart. Each story should have an emotional core with believable emotional conflicts but told in an up-beat, fun, contemporary way. The hero should be sexy, aspirational and the romantic tension should sizzle, but when it comes to the bedroom – the door should be firmly closed. We are open to romantic comedies, first person narratives and interesting twists on classic romantic themes.

Kelly Hunter is an author in the "hot & steamy" group, so With This Fling ... should provide some indication of what the editors mean when they write that these novels "reflect the life experiences of today’s young women, within a chic, glamorous, and usually urban setting."

Charlotte Greenstone is an exceptional archaeologist: "when it came to worldly possessions Charlotte had more than enough for any one person" (7-8) and she has "more publications than most archaeologists three times your age" (14). Not only is she young, wealthy and a big name in her academic field, but she also has "The kind of voice that slid down a man's spine and reminded him that he hadn't had a woman in a while" (35-36) and looks like Lara Croft:

Slender, she was that, but she had some generous curves and an abundance of wavy black hair currently tied back in a messy ponytail. She also possessed a heart-shaped face and a creamy complexion that would put Snow White to shame. A wanton's mouth. One that turned a man's mind towards feasting on it. Big doe eyes, with dark curling lashes. 'Are you really an archaeologist?'
'Yes,' she said grimly. 'And before you start making comparisons between me and a certain tomb-raiding gun-toting female gaming character, I've heard them all before.' (47)

I have serious doubts that Charlotte really "reflect[s] the life experiences of today’s young women"; it would seem that, rather than providing a realistic portrayal of young women's lives, the emphasis in this half of the line falls rather more heavily on the side of depicting "glamour" (i.e. wealth, power, beauty).

According to Fiona Harper, who writes for Riva and has blogged about the first four novels in the line,

While the sensuality levels vary between the two lines, the types of stories and the 'voices' of the authors are very similar. Riva is the home of sparky, sassy stories of life and love - from first flicker to burning flame.

This presumably means that readers can expect all the novels in the line to deliver "a whole load of sass," which can be defined as "impudence; cheek" (OED). Here's an example of some of Charlotte's:

He brought the car to a standstill. [...] Charlotte [...] bent down and smiled at him through the window, showing even white teeth and an abundance of free-spirited cleavage.
She made no move to get in the car.
Gritting his own teeth, Grey slid from the car, strode around it and hauled the door open for her. 'Why couldn't you have been a feminist?' he said.
'Why on earth would I want to be a feminist?' she muttered as she slid into the seat and waited for him to close the door. 'Where's the power in that?'
He shut the door. Gently. He got back in the car.
'You'll notice I'm not currently wearing a bra,' she said briskly.
Oh, he'd noticed.
'That's because the bodice of this dress fulfils that function, not because it's a feminist convention of the late last century'.
'Noted,' he said.
'I would, however, have made a wonderful suffragette,' she told him. 'There are many principles of equality that I adhere to.'
'Wonderful,' he said dryly. 'Power-based selective feminism. Can't wait to experience that.' (66-67)

It seems a pity Charlotte's understanding of feminism is so flawed. On the topic of bras, for example, she'd have benefited from reading this post at "Finally, A Feminism 101 Blog."1

It transpires that Charlotte might also have benefited from doing just a little bit of research into safe sex. Her views of sex are presumably "sassy": "I'm reasonably in favour of flings as a legitimate means of providing temporary companionship and sexual satisfaction" (90) but there is no mention of condom-use when she and Grey begin their sexual relationship. Since they had previously engaged in a discussion about the ground-rules for the relationship which left Grey pondering Charlotte's need for psychological "protective barriers" (92) and complaining that "What with all this arranging of events, we seem to have lost a bit of spontaneity" (96), it seems ironic that she does not negotiate the use of physical "protective barriers." Certainly when Charlotte discovers she's pregnant she doesn't mention a split condom, so presumably she was relying on the fact that "I'm on the pill [...] because of irregular periods" (149) to ensure that she didn't conceive. Maybe it's supposed to seem sassy of her to have unprotected sex with "a man she barely knew" (95)?

As I mentioned earlier, this is only one book and one has to be careful about extrapolating from a small sample, but I'm nonetheless left wondering how often "sassy" in the Riva line will mean "prone to exhibiting 'Power-based selective feminism' and ending up accidentally pregnant."

--------
1 And while we're on the subject of feminism, you may be interested in this little example of Charlotte's sassy approach to monitoring gender norms:

He'd dressed casually in old jeans and a white linen shirt with a round neck. The shirt could have looked effeminate, but not on those shoulders, and not with that face.
No, with those shoulders and that face and that lean and tight rear end of his, the metro shirt served only to emphasise the blatant masculinity of the body beneath. (70-71)

The image of Lara Croft came from Wikipedia.
Posted by Laura Vivanco at Friday, January 07, 2011