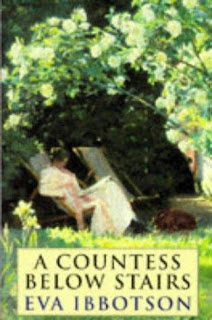 Eva Ibbotson, who died on Wednesday,

followed two separate paths: as a writer of romance fiction and as a writer of witty and imaginative ghost stories for young adults. Her romance novels include A Countess Below Stairs (1981) and Magic Flutes (1982), which was chosen as the best romance novel in Britain for the year 1983 by the Romance Novelists Association [sic]. [...] She says: "After years of writing magazine stories and books for children, I am trying hard to break down the barrier between 'romantic novels' and 'serious novels' which are respectfully reviewed. My aim is to produce books that are light, humorous, even a little erudite but secure in their happy endings. One could call it an attempt to write, in words, a good Viennese waltz!" (Writer's Almanack)

As far as I can recall, the first novel I read by Ibbotson was one of her children's novels: Which Witch? (1979). It contains a number of elements which would later appear, in more muted form, in many of her works for adults: there's a good and resourceful but poor heroine who helps almost everyone with whom she comes into contact, her beautiful but bad female rival for the hero, and the rich hero himself. Belladonna is a white witch, while Arriman is a wizard specialising in black magic who works hard at "blighting and smiting, blasting and wuthering and doing everything he could to keep darkness and sorcery alive in the land" (9). The scene in which Arriman first sees her reads to me like an affectionate parody of romantic fiction:

Belladonna was sitting up in bed. The sun, streaming through the East Window, had turned her hair into a shower of gold; her eyes were bright with happiness and blue as a summer sky and she was singing a sweet and foolish little song: the kind with roses in it and springtime and love. Rather a lot of love.
Arriman stood stock-still in the doorway, unable to move.
"Who ... is this?" he stammered.
"That is Belladonna, sir. [...]"
[...]
Belladonna, meanwhile, was gazing rapturously at Arriman, her heart in her eyes. This was the closest she had ever been to him and she was drinking in the flaring nostrils, the tufty ears, the curve of his noble nose.
"Belladonna!" said the magician, stepping forward. His voice throbbed, his eyes burnt and his chest heaved like a pair of bellows. (142-143)

Arriman's servant Lester is reminded "how absolutely ridiculous people sounded when they were in love" (144) and Ibbotson was clearly well aware of how easily romance itself could slip over into the ridiculous. Her own romance novels, however, did not, and Anne Gracie, who interviewed her in 2009 for the Word Wenches site, has described Ibbotson's "adult romances" as

superb — and not "teenage novels" at all (which is how the publishers are now marketing them— I presume because there are no sex scenes.) Her stories are wonderfully textured, heartwarming and, to quote another Word Wench, "they have a magical blend of wit, sweetness, and emotion."

Born in 1925, she came to Britain from Vienna in 1933 with her father Berthold Wiesner, a brilliant physiologist who had a job in Edinburgh University. [...]

In 1934, Eva's adored mother arrived in Britain: Anna Gmeyner, a charismatic and beautiful Jewish writer who had worked with Brecht and written film scripts for Pabst. Already separated from her husband and now living with an aristocratic Russian philosopher, Anna set up house in Belsize Park, North London. "After that, I used to travel between the two households, both occupied by glamorous and worldly parents who were each lousy about not criticising the other in my presence. My response was to try to ingratiate myself with both." (Tucker)

She spent some time at

the progressive boarding school, Dartington, to which she was sent after a period being shuttled between her separated parents.

Ibbotson described this period of her childhood as "cosmopolitan but unhappy" and she attributed to it her desire for happy endings in which her characters always find a home. She explained in a recent interview, "my mother wrote film scripts and worked in Berlin and my father was a scientist and worked in Edinburgh and my grandparents lived in Vienna and I was always on some large train going about and wishing I had a home. So when I came to write, consciously or unconsciously I always had to make things right for the hero or the heroine". (Pauli, "Children's")

Ibbotson's happy endings weren't just wish fulfillment, though, and her

fictional happy endings came relatively late in life: she was busy with real-life ones for the first part of her adulthood. A degree and postgraduate study in physiology at Cambridge University, inspired by a mistaken desire to follow in her father's footsteps, proved to be a "complete disaster" – except for a meeting with the man she would spend the next 49 years of her life with, an ecologist called Alan Ibbotson. [...] A post for her husband at Newcastle University took Ibbotson to the city [...], and she was kept occupied providing her four children with the settled childhood she never had. (Pauli, "Eva")

When interviewed in 2001, she stated that

I wrote my last book for adults, Song for Summer, four years ago. Before that, I used to write books for adults and children alternately, and I found that this worked well. But after my husband died, I found myself turning more to children's books (Grant).

Some of her books for adults fit the strict definition of a "romance" more closely than others. I have listed them below, with links to reviews:

A Countess Below Stairs (1981, reissued as The Secret Countess in 2007) [reviews: AAR, Dear Author, The Book Smugglers]

Magic Flutes (1982, reissued as The Reluctant Heiress in May 2009) [reviews: AAR, I Read Romance, The Cultural Gutter]

A Song for Summer (1997) [reviews: The Bookworm Chronicles, The Compulsive Reader, TRR]