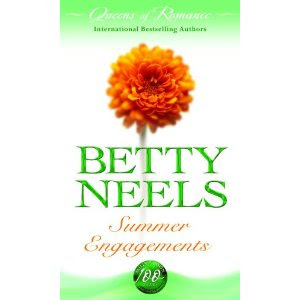 In their centenary year Mills & Boon brought out a collection of volumes of novels written by the 'Queens of Romance'. One of those queens was Betty Neels, whom they describe as

a very special, warm and charming writer and individual; after retiring from nursing, she became one of Mills & Boon's best-loved authors with a phenomenal publishing record. No collection of romances celebrating our centenary would be complete without Betty [...]. Over her thirty-year publishing career Betty wrote more than one hundred and thirty-four novels [...]. She continued to write into her ninetieth year, still pleasing her readers with her charming characters and heart-warming stories. (3)

Neels' 'first book, Sister Peters in Amsterdam, was published in 1969' (Harlequin) and as Keira at The Uncrushable Jersey Dress has observed,

Uncertain Summer was first published in 1972, relatively early in Neels' writing career, but it already contains a fair number of these ingredients. The reason I wanted to post about it, though, was because in this novel Neels includes a metafictional passage in which the heroine, Serena,

remembered reading once some novel or other in which the dim-witted heroine had declared on the last page that the hero was like a calm harbour after the stormy seas through which she had been struggling. Serena had thought at the time that the metaphor had been a singularly clumsy one - no man would care to be likened to a harbour; now she wasn't so sure, for she herself felt exactly as the tiresome girl in the novel had felt and Gijs, although not in the least like a harbour, had all its qualities. (150-151)

Serena has indeed been a rather tiresome heroine, having fallen in love with Gijs' very unsuitable but charming and handsome younger cousin and then, rather predictably, been jilted by him. Even though she has finally had to acknowledge Gijs' superiority, she agrees to enter into a marriage of convenience with him without realising that he loves her. In this she, too, seems rather 'dim-witted' for his actions make his love rather obvious to the reader. Serena, however, who began by being unsure 'if she liked him' (20), believes that he truly wishes their marriage to be 'a friendly and businesslike arrangement' (113).

I'd like to suggest that in the passage I quoted above, Neels seems to be trying to diffuse any reader dissatisfaction with her heroine by addressing the fact that the heroine is being 'tiresome'. The metafictional moment takes the reader out of the story, and by emphasising the reader's superior knowledge, it perhaps encourages identification with others who also have superior knowledge of the situation, namely Neels herself, and characters such as Serena's mother and Gijs' friend Sarah, all of whom are aware that Serena and Gijs love (or will love) each other. Instead of experiencing the heroine's confusion and distress with her, it seems that the reader is positioned alongside the benevolent matchmakers.

Having firmly placed her own hero and heroine in a particular romantic tradition (that in which a somewhat 'dim-witted' heroine finds happiness with a hero whose personality reminds one of a 'harbour'), Neels includes further evidence that the development of Serena and Gijs' love affair follows a pattern set down by others. Serena tells her mother that

'I didn't like him very much when we met.'
Her mother paused on her way to the door. 'My dear child, I loathed your father for quite some time before I fell in love with him.'
Serena contemplated her parent with open-mouthed astonishment. 'Mother, darling ...'
'Yes, and don't you tell your brothers and sisters. I'm only telling you so that you realize that yours is by no means an isolated case.' (143)

It certainly isn't 'an isolated case' in Neels' oevure.

Serena and Gijs are also shown to be following a pattern set down by an earlier Neels hero and heroine. Hugo and Sarah van Elven are the hero and heroine of the earlier Fate is Remarkable (which Magdalen has summarised and retold from Hugo's perspective). They reappear, very happily married, in Uncertain Summer and before Serena begins what she thinks will be a marriage of convenience, Sarah tells Serena that

'When I married Hugo I was in love with someone else, or at least, I thought I was.' She smiled. 'It didn't take me long to discover that it was Hugo all the time - so silly.' (135)

The use of the word 'silly' seems to suggest that Sarah was yet another 'dim-witted heroine' until she recognised the truth. Since then, she has made the transition to matchmaker status. Towards the end of the novel Serena, like Sarah before her, flees from her husband in the mistaken belief that he loves another. Sarah, knowing the script that Serena is working from, hastens the happy dénouement. As Gijs reveals to Serena:

'When Hugo and Sarah married, she didn't love him - she had been - er - jilted and he caught her on the rebound. She ran away too, it took Hugo more than a week to find her. She is far too fond of you - and me - to let history repeat itself. So she telephoned me.' (211)

By explicitly acknowledging the similarities between Serena and Gijs' story and those of others (particularly a previous Neels hero and heroine), Neels was perhaps preempting criticism of the repetitiveness of her oeuvre. Certainly it serves to normalise a certain courtship pattern within the romantic world she created.

I deliberately refer to it as a 'romantic world' because although Neels' novels were contemporaries, they seem to portray a very particular, and perhaps not very realistic, version of modern life. Magdalen, for example, has stated that

Frankly, even in 1969 when Neels published her first book, her heroines were anachronistic and unrealistic. During the 30 years during in which she wrote 134+ books, her heroines changed little while women everywhere else (fictional and real life) changed a lot.

the Medical Registrar [...] had taken her out for a month or two, talking vaguely about a future, which she, in her besotted state, had already imagined into a fact which wasn't a fact at all, only daydreams, and then, when she had refused to go away with him for the weekend, had turned the daydream into a nightmare with a jibing speech about old-fashioned girls who should move with the times [...] how did one begin to explain that being the middle girl in a family of five daughters, strictly but kindly brought up by a mother with decidedly old-fashioned ideas and a father who was rector of a small parish in the depths of rural Devon was hardly conducive to being the life and soul of the swinging set. (8-9)

In Small Slice of Summer Georgina, the heroine of Neels' earlier Damsel in Green, reappears as a happily married secondary character and the repetitiveness of certain elements in Neels' storytelling is normalised partly because the friendships between Georgina and Letitia's sister Margo, and between Georgina's husband and Jason Mourik van Nie, give an explanation for a social circle in which it is likely for an English nurse to come into contact with a Dutch doctor. In addition, Georgina actively seeks to promote the relationship between Letitia and Jason (and is thus another instance of the former-Neels-heroine-turned-matchmaker).

While I can only speculate about why Neels so often wrote romances about a large, inscrutable, rich Dutch doctor who stoically hides his love from the English nurse he adores, she herself was a nurse who married a Dutchman (albeit not a doctor). According to her biography at the Mills & Boon website,

She was always quite firm upon the point that the Dutch doctors who frequently appeared in her stories were not based upon her husband, but rather upon an amalgam of several of the doctors she met while nursing in Holland.

Nonetheless, her heroes do often seem to be of a very similar type, and the fortune-teller who predicts Letitia's future summarises the plot of many a Betty Neels romance: 'A tall, fair man, dearie [...] Trouble and strife, but the life of a princess is waiting for you, for I see wealth and jewels and great happiness' (136). The fortune-teller states that this is 'Just as it should be for a kind young lady' (136) and perhaps Neels herself could think of no better type of husband for a nice girl.

Neels' own preferences certainly did filter through into her fiction. Many of her heroes and heroines, including Serena and Letitia, come from large families. Gijs, in conversation with Serena, says

Initially Uncertain Summer was going to conclude with a passage in which Gijs would state his preference for 'a "large" family of at least four boys and four girls. The Mills & Boon editor altered the reference to four children to two' (McAleer 265). Neels resisted the change:

In her masterly reply, Neels [...] believed that, provided there was enough money to bring up and educate children, 'a large family is a marvellous thing (You've noted that my heroes are always well-heeled!).' Neels admitted she deplored birth control when used 'for purely selfish reasons ... I find it just as unforgivable for a couple to decide on a second car instead of a baby ... I also feel that if birth control is pushed too far, the coming generations are going to lose their sense of responsibility and family life, as such, will disappear.'
But the passage, as published, was none the less toned down by Neels. (266)

It reads as follows:

Laurens told me once that you were very good at letting girls cry on your shoulder.'
'Not girls, dearest - just you, and later on, our daughters.'
Serena said gently: 'No, little boys, all like you.'
'There is such a thing as compromise, my love,' said Gijs on a laugh. 'How about an equal number of each?' (215)

I'm really curious about the use of the phrase 'There is such a thing as compromise'. Was it there before Neels revised the passage? Or was it the result of Neels' own compromise on the issue of large families?