To Blog, or Not To Blog: That is the Question 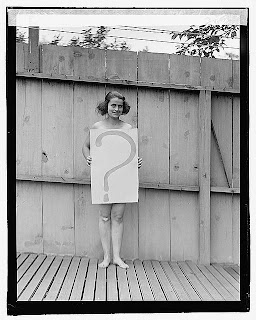 Jessica at Read, React, Review will be attending the 2010 Popular Culture Association/American Culture Association Conference, and she's been thinking about blogging about the papers. However, last year when she did this she "ran into a few 'issues' so this year she's asking for some advice in advance of the conference.

Could blogging about conference presentations cause harm? [...]

1. Maybe someone reading this blog will scoop the presenter’s WIP, stealing her thesis and getting an article into print first. The presenter loses a publication and time spent on research. This could affect her chances for getting tenure (this would not be an issue for presenters who are presenting published or forthcoming work, of course).

2. Blog commenters are harshly critical of the presenter, in a way no one in an academic audience would be. They write things like, “That is just stupid” or “What a dumbass!”. It is hurtful to the presenter — not a reaction she was prepared for, and she worries it will devalue her work if it is the first thing that shows up in a Google search.

3. It is not the presenter’s best work. In fact, it is really not ready for prime time. She hates the idea that it is online for posterity, when she plans to radically alter or abandon the research post conference.

As regular readers of this blog will know, I blogged about the papers at this year's conference on Georgette Heyer, so Jessica's list of problems made me feel a bit worried. Did I do the wrong thing? Well, as far as 3. is concerned, the presenters may feel that way about their work but if they did, they didn't mention it to me. I contacted all of them either prior to, or just after, I published the posts so that they could offer corrections/objections. Problem 2. wasn't an issue here, and as for Problem 3., I may be wrong about this but I would have thought that blog posts of this kind make stealing less likely, since the author's name is attached to the summary of the work and provides an online record of the date on which she presented it.

My intention was to share some of the enthusiasm of the day, show what a vibrant area of study this is, and whet people's appetites for the full papers when/if they're published (the hope is that at least some of them will appear in a future issue of the Journal of Popular Romance Studies, and I've heard that Jennifer Kloester's biography of Heyer will be published sometime next year). Jessica has come up with a few other reasons in favour of blogging about conferences:

Are there any ethical arguments in favor of blogging the conference? I tend to be skeptical about this in terms of my little blog, but here goes. Possibly the goods of disseminating information, and any ancillary goods that come from that, like contacts being made (someone reads this blog, finds out Julie Juniper is working on her topic, they get in touch, they collaborate or develop some other mutually beneficial exchange), or academics who were not able to attend the conference (maybe they were ill or couldn’t afford it) getting to stay updated in their field a bit, or nonacademics, i.e. most readers of RRR, benefiting by getting a glimpse into a different way of approaching their favorite books, and enjoying this or learning from it.

Personally, and perhaps very selfishly, I hope that Jessica does choose to blog about the PCA/ACA conference because I won't be there. Take a look at the following list of the romance-related sessions taken from the Conference program and see if you feel the same way!

"Cinematic Time and the Fate of the Family in Classical Hindi Cinema"‖ Anustup Basu, University of Illinois

"Romancing the Rapist: The Myriad Uses of Sexual Force and Violence in Genre Romance"‖ Robin Harders, University of California, Irvine

"Let's Keep It in the Family: Nora Roberts' Connected Books"‖ An Goris

Romance Area Meeting
American Center, Room 242 (2nd Floor)
Thursday, April 1, 5:00 P.M.
Chair: Sarah Frantz, University of North Carolina, Fayetteville, and Darcy Martin, East Tennessee State University
Open discussion about the current state of romance studies, including: the progress of the International Association for the Study of Popular Romance, the publication of the first issue of the Journal of Popular Romance Studies, IASPR's conference in Belgium in August 2010, the planned Popular Romance Studies Special Issue of the Journal of American Culture in 2013, and preliminary planning of IASPR's 2011 conference in New York City before the RWA annual conference. The meeting is open to all presenters and anyone interested in our area. Please join us and then join us for a Romance Area Dinner at a local restaurant afterwards.

"The Romance Community: A Room of One's Own and Écriture Feminine"‖ Pamela Regis

"'Can I set it in Canada?': CanLit and Romance Publishing"‖ Jessica Taylor, University of Toronto

"Twilight and Romeo And Juliet: The Portrayal of Love and Narrative Perspective"‖ Brent Gibson, University of Mary Hardin-Baylor

"Comparison of Romance Videogames to other Romance Media"‖ Jill Astley

"Crikey, It's Romance for Men: Australian Sports Novels and Westerns of the 1950s‖ Toni Johnson-Woods, University of Queensland, Australia

"Neither True Nor Fair: An Exploration of Female Heroism in Popular Romance"‖
Angela Toscano, University of Utah

The Vampire in Literature, Culture, & Film: Roundtable—Blood, Sex, and Love: Exploring Vampire Romance Novels and Their Impact on the Image of the Vampire
Moderator: Amanda Hobson, Ohio University
Panelists:
Jessica Miller, University of Maine
Heide Crawford, University of Kansas
Bloodsucking fiends no longer. While there is not a single, monolithic vision of the vampire, the predominant pop culture image of the vampire has morphed from the unapologetic horror figure with gleaming fangs waiting to drain your blood to the sexy sympathetic and tortured soul that would rather sweep you off your feet than hurt you. Vampire myth, folklore, and fiction have integrated romance and sexuality as core elements from the beginning. The sympathetic vampire has existed within the folklore along with the more horrific, but this apologetic vampire has found a massive following in the last decade, especially as romance novelists have begun major incorporation of the vampire into their novels. Authors in other genres have also integrated this more sympathetic and charming vampire. These novels utilize a belief that vampires are neither good nor evil but can be either or both, as they inhabit the grey area. A few series stand out as indicative of this current trend, such as The Black Dagger Brotherhood series, The Anita Blake Vampire Hunter series, the Twilight Saga, and the Southern Vampire series (a.k.a. the Sookie Stackhouse series or True Blood). These series have demonstrated the evolution of the vampire's use of sex and romance to lure prey to a desire for companionship. This roundtable will offer a venue to discuss this phenomenon of the vampire romance, including an exploration of the following questions: have these romantic vampires defanged the traditional vampire, are these vampires indicative of the larger vampire narratives particularly beginning in the nineteenth century, and why the romance genre has embraced the vampire lover?

"Is Happily Ever After a Romance Imperative?"‖ Phil Mathews, Bournemouth University

So, have you got any advice (of a non-selfish variety) to offer Jessica?

------
Taken on the 28th of July, 1922, the photo is from the National Photo Company Collection (Library of Congress) at the Library of Congress Prints and Photographs Division Washington, D.C. 20540 USA. It is available online and there are "No known restrictions on publication." I found it via Wikimedia Commons.
Posted by Laura Vivanco at Sunday, March 14, 2010