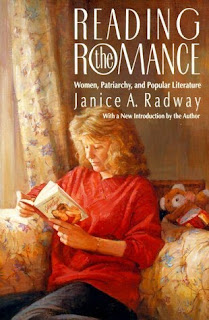 On page 5 of her new (1992) introduction to Reading the Romance Radway acknowledged that "even what I took to be simple descriptions of my interviewees' self-understandings were mediated if not produced by my own conceptual constructs and ways of seeing the world" (5). Furthermore, she observes that


Whereas he [another scholar] notes his excessive concentration on the single variable of class and the rather simple way in which the concept itself was constructed, so I might point in my own study to the exclusive preoccupation with gender and to the use of a fairly rigid notion of patriarchy. (9)

What Radway notes here is, I think, something that it is important to remember when reading all the existing attempts to understand romance readers. Each author's interpretation is likely to be shaped by her or his "conceptual constructs." Like an invisible set of glasses, these interpretative lenses can colour the author's perception of the situations she or he sees, and may make her or him more likely to focus in on aspects of the problem which are more visible through those interpretative lenses.

Radway was looking at the small group of Smithton readers through a pair of lenses created by "the psychoanalytic theories of Nancy Chodorow" (9): "through its use of psychoanalytic theory, the book attempts to explain how and why such a structured 'story' might be experienced as pleasurable by those women as a consequence of their socialization within a particular family unit" (11). Individuals' identities are a composite of superimposed layers, and one lens alone may not suffice to understand the complexities of an individual's choices. Radway, in her new introduction, states that "I would now want to organize an ethnography of romance reading comparatively, in order to make some effort to ascertain how others social variables like age, class location, education, and race intersect with gender to produce varying, even conflicting, engagements with the romance form" (9). Having brought in those variables, she might have needed to add a few more lenses to her set of glasses: psychoanalytic theories about gender might have relatively little to say about racism or economic inequality, for example.

And, of course, not all readers are identical to the Smithton readers, nor do we all share their reading preferences. As Radway herself acknowledged,


It is clear that the Smithton group cannot be thought of as a scientifically designed random sample. The conclusions drawn from the study, therefore, should be extrapolated only with great caution to apply to other romance readers. (48)

A lens, or set of lenses, which work well with one set of readers may not work so well with other readers, or may even render them invisible. The Smithton readers were all women, for example, but there are male romance readers.

Bearing all this in mind, when Radway writes that she was


struck by the urgency, indeed by the near hysteria, with which romance authors assert that the newly active, more insistent female sexuality displayed in the genre is still most adequately fulfilled in an intimate, monogamous relationship characterized by love and permanence (15)

it seems legitimate to wonder which of Radway's own "conceptual constructs and ways of seeing the world" were shaping this view of romance authors' assertions. It also seems deeply ironic for a feminist scholar to employ the rather loaded term "hysteria," so often used to dismiss women's experiences, to dismiss romance authors' statements about their own work.

Her own statement seems to insist that female sexuality should not be displayed in an intimate, loving and permanent monogamous relationship. I find it difficult to understand what is so wrong about loving and permanent intimate relationships. I suppose it's possible she was objecting to monogamy and she wanted greater recognition for polyamorous relationships. Or perhaps she was not really thinking of the full range of possible "loving and permanent intimate relationships" but was only critiquing the versions of these relationships which exist in "patriarchal marriage" (14). Whatever she meant, her lenses, the romance authors' lenses, and the lenses I'm wearing myself make it rather difficult for me to untangle what Radway and the romance authors really meant when they made their statements about the genre.

Radway's a lot clearer elsewhere. For example, she concluded that there was a


deep irony hidden in the fact that women who are experiencing the consequences of patriarchal marriage's failure to address their needs turn to a story that ritually recites the history of the process by which those needs are constituted. [...] the Smithton women are repetitively asserting to be true what their still-unfulfilled desire demonstrates to be false, that is, that heterosexuality can create a fully coherent, fully satisfied, female subjectivity. (14)

There's certainly a "deep irony" in the fact that, as Radway noted, the Smithton women made a "universal claim to being happily married (a claim I did not doubt)" (13) yet, while claiming not to doubt them, she remained certain that they were "experiencing the consequences of patriarchal marriage's failure to address their needs" and in particular their "desire for the nurturance represented and promised by the preoedipal mother" (14).

Interestingly, when the Smithton readers were asked "whether romance reading ever changes women" (101) they emphatically answered that it did because "their self-perception has been favorably transformed by their reading" (102) and they were "convinced [...] that romance fiction demonstrates that 'intelligence' and 'independence' in a woman make her more attractive to a man" (102). More nurturance from their husbands would not necessarily have achieved these results: it might have made the women feel more cared for, but would it have changed their self-perception and made them willing to show their intelligence and independence?

Just as an experiment, I'd like to take two different sets of interpretative lenses and see how they might shape one's view of the Smithton readers' responses. What happens if one asks whether it is economics which shaped these women's reading choices? It has been argued by feminist economists that


Economics has divided life into two separate categories: the economic realm and the household realm. The economic realm focuses on the market: producers, buyers, and sellers, while the household realm includes all the range of unpaid work that is necessary for the functioning of life. Because economics only counts production that produces items that can be sold in the market, the household is seen as being outside of the economic realm and therefore 'unproductive.' In contrast, the buying and selling and trading that takes place in the economic realm, is 'productive.' This assumption that households are not sites of production has meant that within the traditional household of male breadwinner, female caregiver, and children, only the male breadwinner is seen as being 'productive.' Women's work of bearing and raising children, maintaining a home, providing food, and providing emotional support for everyone, is simply assumed despite the fact that the economy is absolutely dependent on it.

Perhaps the Smithton romance readers, "women who saw themselves first as wives and mothers" (7) were taking a well-deserved break from their work in order to read books in a genre which recognised the value of that work? These were, after all, women who "referred constantly and voluntarily to the connection between their reading and their daily social situation as wives and mothers" (9), who "are angered by men who continue to make light of 'woman's work' as well as by 'women's libbers' whom they accuse of dismissing mothers and housewives as ignorant, inactive, and unimportant" (78) and, as Radway herself has written, "the romance readers of Smithton use their books to erect a barrier between themselves and their families in order to declare themselves temporarily off-limits to those who would mine them for emotional support and material care" (12). Even workers who enjoy their jobs require some leisure time, but because the work in which these women were engaged is often not considered to be "work," and because it is carried out within the home, there may be no provision made for "clocking off" at the end of a long shift. If one looks at the Smithton readers through the lenses of feminist economic theory, one might suggest that they were finding in these books both a physical means of asserting their right to leisure time, and validation that their work as wives and mothers is indeed of crucial importance. This might explain why "their self-perception has been favorably transformed by their reading" (102).

Furthermore, it could be argued that the general lack of respect for women's unpaid work is revealed in the way that the Smithton readers "are often called to task by their husbands for their repetitive consumption. [...] The women wonder [...] why they should have to adhere to standards of thrift and parsimony with respect to books when other family members do not observe the same requirements" (103). Feminist economics might answer this question by pointing out that household work is unpaid. These Smithton readers were, in a sense, attempting to take their wages in the form of books, and their spouses, in querying the expenditure, were demonstrating that women's work in the home is not seen as deserving of pay, either in cash or, indirectly, via the cost of leisure activities.

Or how about another lens, this time that of a different school of psychology, which Eric Selinger described at Romancing the Blog:


There seems to be a whole branch of psychological inquiry out there called Positive Psychology: not some fuzzy set of platitudes and bromides, but (in Seligman’s words) “a science that seeks to understand positive emotion, build strength and virtue, and provide guideposts for finding what Aristotle called the ‘good life.’” My hunch, which I plan to test across the next few months, is that romance novels are often primers in positive psychology, in ways that measure up quite well against current research.

After all, Radway herself "found it impossible to ignore" the Smithton readers' "fervent insistence that romance reading creates a feeling of hope, provides emotional sustenance, and produces a fully visceral sense of well-being" (12). She also relates one reader's comment:


"Optimistic! That's what I like in a book. An optimistic plot. I get sick of pessimism all the time."
Her distinction between optimistic and pessimistic stories recurred during several of the interviews, especially during discussions of the difference between romances and other books. (99)

Perhaps, then, there is a good reason why Dot, when asked "What do romances do better than other novels today?" (87) answered: "It's an innocuous thing. If it had to be ... pills or drinks, this is harmful" (87). Perhaps these readers were treating their psychological problems with a dose of optimism, rather than resorting to more dangerous substances.

I'm just trying to demonstrate how a different set of interpretative lenses could lead to very different conclusions. I'm not stating here that either feminist economics or positive psychology provide the key to correctly understanding what the Smithton women told Radway. It might be that neither of those lenses are helpful or, and I think this is more likely, it might be that those lenses are helpful but individually cannot explain the Smithton readers' choices and reactions. 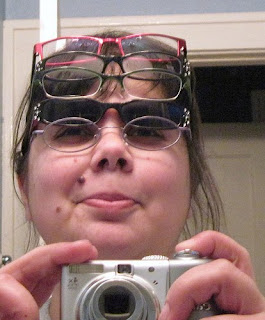 In fact, before undertaking a study like Radway's, I think I'd feel the need to kit myself out with a diverse set of lenses, like this

I found Marysuephotoeth's self-portrait of herself wearing many different pairs of glasses at Flickr, where she had made it available for use under a Creative Commons license.