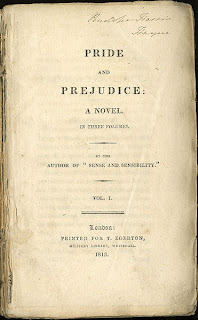 The juxtapositioning of Darcy and vampires in the title of the essay reminded me of the existence of Vampire Darcy’s Desire: A Pride and Prejudice Adaptation by Regina Jeffers and Mr. Darcy, Vampyre by Amanda Grange, but Sarah Frantz's essay is not about such very direct vampiric descendants. Indeed, the fact that J. R. Ward's heroes are vampires is relatively unimportant to her discussion, except inasmuch as it is the cause of their "hypermasculinity."

the proof of the power and appeal of the hero’s confession, and of Austen’s genius in creating it in the first place, can be found in the modern romance reader’s continued desire for similar masculine confession and emotion in modern romance heroes. Indeed, the most significant change in popular romance over the last thirty years is the increase in the reader’s access to the thoughts and emotions of the romance hero. [...] From the perspective of popular romance narratives, then, Austen’s achievement was to locate the emotional climax of the novel in Darcy’s narration of his maturing emotional state, even though it was constructed primarily from the exterior through dialogue. Modern popular romances expand and exploit the power and appeal of Darcy’s confession by providing continuous access to the interior perspective of the romance hero as he realizes and admits that his heroine has become indispensible to his happiness.

It could, perhaps, be argued that the hero's confession was not created by Austen. In Diego de San Pedro's late fifteenth-century Spanish sentimental romance, Cárcel de Amor, for example, it is initially made through an intermediary. However, the hero's pains are also depicted via his apparent imprisonment in a prison of love, where he is chained, and crowned with metal spikes. He eventually dies of love, but his sufferings and their depiction suggest that there has been a very long and varied tradition of depicting heroes' immense emotional suffering caused by love. Even if one only goes as far back as Samuel Richardson's Pamela (1740) we can find a hero making a confession of love. Mr B.'s letter to Pamela, in which he opens with the words "In vain, my Pamela, do I find it to struggle against my Affection for you" (250) even contains the same words, "In vain" and "struggle," which are used by Mr Darcy: "In vain have I struggled. It will not do. My feelings will not be repressed. You must allow me to tell you how ardently I admire and love you" (Chapter 34). Mr B's love also appears to make him fall ill and he tells Pamela from his sickbed that:

Life is no Life without you! If you had refused me, and yet I had hardly Hopes you would oblige me, I should have had a severe Fit of it, I believe; for I was taken very oddly, and knew not what to make of myself: But now I shall be well instantly. (255-56)

Compared to some earlier heroes and the sometimes very dramatic manifestations of their lovesickness, Mr Darcy's outburst may indeed seem "relatively mild." Frantz argues that is the insights which modern romances provide into "the interior perspective of the romance hero" which have led to an intensification in the type of evidence provided of the hero's emotions:

Darcy’s relatively mild words to Elizabeth in both the first and second proposal scenes are meaningful because the lack of narrative access to his internal perspective makes the directly expressed words a powerful representation of the barriers he has overcome in order to be able to express them at all. But when access to the hero’s thoughts is granted by the narrative, the emotional power of the hero’s confession of his feelings for and his education by the heroine must be attained through other the narrative strategies, resulting not only in supernatural heroes whose inhuman abilities redefine the limits of the merely human hero, but also in a narrative insistence on locating the emotional climax of the novel in the hero’s tears. Stereotypically in modern popular romance, the more masculine the hero, the more emotionless he is, and the larger the barrier that must be overcome to achieve access to his emotions.

In order for these superhuman men to prove that they have broken through the barrier of their masculine emotionlessness enough to fall in love with and appreciate the changes wrought by the heroine, the narratives invariably depict them crying. Masculine tears are something modern women are taught to long for as demonstrating the depths of a man’s emotions, precisely because our culture paradoxically teaches boys and men that, in order to be “real” men, they should never cry.

Of course, not all modern romances feature "superhuman men," and not all "modern women are taught to long for" masculine tears. Furthermore, not all readers of the essay will share the same "culture." Given that Frantz's essay moves from analysis of an early nineteenth-century English tex to several early twenty-first-century American ones, it might have been useful to have been told a little bit more about differences between the cultures in which they were both produced. Perhaps differences in culture, as well as differences in the degree of access the author grants the reader into the heroes' thoughts, have affected the depiction of "the hero’s confession of his feelings." In addition, although Ward's novels "invariably depict them [the heroes] crying," not all modern romance heroes cry.

In fact, Frantz seems to acknowledge this last point when she writes that "The current trend in the hero-focused popular romance means that the more alpha the hero, the more likely he is to cry to prove his love for the heroine." She has therefore chosen to study the tears shed by the heroes of J. R. Ward's Black Dagger Brotherhood series and she concludes that

As campy as they are, Ward’s hypermasculine vampires are Darcy’s ultimate heirs. Darcy not only must mature because of his love for Elizabeth, but he must also recognize and welcome the change his heroine has wrought in him. Superhuman, nearly immortal, cursed, and emotionless, Wrath, Rhage, Zsadist, Butch, Vishous, and later Phury and Rhevenge, represent the hyperbolic extreme of Darcy’s attractiveness, power, and pride. Their tears of love, acceptance, and despair break through strong taboos of masculinity and represent the inevitable physical embodiment of Darcy’s verbal expression of his emotional maturation. The stunning popularity of the Black Dagger Brotherhood series indicates that modern romance readers—just like Darcy’s first fans—appreciate the opportunity to plumb the true emotional depths of the romance hero. The more masculine the man and the more devastating to his own emotional control is his admission of the importance of love to his very existence, the more powerful and precious that admission is to the reader. Pamela Regis, after claiming Pride and Prejudice as the Ur-text of popular romance fiction, argues that “Ordering society is now an issue of taming or healing the hero. . . . Untamed or unhealed, the hero will not truly appreciate the role of the heroine in his life; he will not engage with her emotionally” (114). The spectacle of masculine tears in the popular romance both tames and heals the hero and allows him to accept, appreciate, and verbalize the necessity of his love for his heroine. But Darcy led the way two hundred years ago.

You can read the whole article at the Persuasions On-line website.

I do wonder where this analysis leaves Austen's other novels, and non-alpha romance heroes. Is Northanger Abbey the "Ur-text" of the modern romance beta hero, for example?