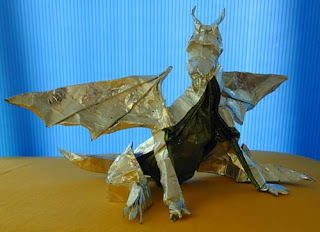 She has slain her papery dragon and convinced her oral examiners of her prowess so she is now Dr Sandra Schwab! Her thesis is titled

"Of Dragons, Knights & Virgin Maidens - Dragonslaying and Gender Roles from Richard Johnson to Modern Popular Fiction." It's basically an overview of the development of the dragonslayer story from 1596 to 2002, covering Elizabethan romance, folk literature, nineteenth-century & early-twentieth-century medievalism, fantasy and romance. The focus is mainly on the development in Britain, but I also discuss a few German ("Kinder- und Hausmärchen"!) and US American texts.

The origami dragon was designed and made by OrigamiWolf and copied in accordance with the Attribution-Non-Commercial-Share Alike license.
Posted by Laura Vivanco at Thursday, December 17, 2009