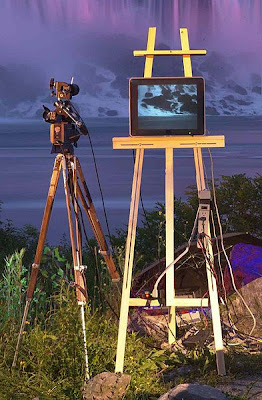 "Life, the aggregate of defined actions, events, or experiences, only becomes plot, story, theme, or motif once it has been refracted through the prism of the ideological environment, only once it has taken on concrete ideological flesh. Reality that is unrefracted and, as it were, raw is not able to enter into the content of literature." (Medvedev and Bakhtin [1928] 1978 qtd. Talbot 3)

"Fiction has to make sense; real life is often so perplexing as to defy explanation." (Miss Snark)

"As Luthi has pointed out, 'Fairy tales are unreal, but they are not untrue: they reflect the essential development and conditions of man's existence' (70).
But what can't be escaped can be revised." (Crusie 57)

"So what is fiction? Simply stories that do not pretend to be about real events. That's the easy answer, but of course there is more to it than that. The relation between fiction and reality is not a straight-forward one. The two have a peculiar way of getting mixed up together; distinguishing the two is not quite as easy as one might think, or hope." (Talbot 5)

Fiction, then, is selective. It can take elements of reality, but the particular elements which are chosen, and how they're placed together to form a whole, reflect choices made by the author, both consciously and subconsciously. What of reality? To a certain extent, all of us construct that too, as in the photo I've included above, of which the photographer commented that "This is a picture I took at the base of Niagara Falls, which itself is perhaps the world's most photographed subject. [...] I still use this picture to illustrate mediated reality, e.g. replacing reality with what's really there..." As individuals living our lives

When we chat to one another, we very often make stories about ourselves - about our excursions and exploits, about our thoughts and feelings. We create stories out of our memories - turning our lives into words and keeping the past alive. [...]
The news on television is full of stories. So are history books. We make narratives out of sequences of events all the time, even when involved in kinds of activity we would not associate with storytelling at all. (Talbot 3)

When we tell this kind of story about reality, we don't have as much creative freedom as an author writing fiction, but the similarities exist because this "storytelling" about reality is also "refracted through the prism of the ideological environment," and is also selective. Sometimes this selectivity is intentional, either because we deliberately want to mislead ourselves and/or others or because we think particular facts are not worth mentioning. At other times we may unintentionally forget or omit elements that seemed less important, or our narrative may take a particular shape because certain facts are not available to us. The Guardian advert, "Points of View," gives us an example of how this last possibility can affect the stories we tell about reality:

What we see in the advert is the same event, shot from various different points of view, and from each the "story" is different.1 The final shot claims to present "the whole picture" but of course it doesn't, because the advert itself is a story (created by John Webster). There is still so much left unknown and unseen.

The advert also depends for its impact on the reader's knowledge. In other words, the story is "refracted through the prism of the ideological environment" not once, but twice. When we read or listen to a "story" (whether it's intended to be read/heard as fiction, or as a narrative about reality, such as a nation's history and identity) we interpret that story in ways which reflect own experiences and beliefs. Readers too are selective. We choose which elements of the story to prioritise, we do not tend to remember every word the author wrote, and we may have differing interpretations of identical or similar narratives depending on the context in which they appear and/or what we know about the narrator. Here's a very topical example:


1 I've tried to embed the video, from YouTube, in the post but if the link breaks or if it fails to work for some other reason, you might be able to watch the advert at this website. Some stills from the advert are shown and described here.

The photo is from Wikimedia Commons.
Posted by Laura Vivanco at Friday, January 23, 2009