Last Wednesday, Jessica wrote a fascinating post about the moral issues raised by a scene in the romantic comedy Love, Actually. To be honest, this movie made me deeply angry the first time I saw it. Several of its interwoven plots felt thin, manipulative, or simply cruel, and I've never given it another go. But two aspects of Jessica's piece have me thinking.

First off, there's the genre issue, or maybe we should call it the issue of medium. On the one hand, it makes perfect sense that Jessica should blog about a movie, since the readership of romance fiction and the viewership of romantic movies clearly overlaps.

On the other hand, since getting involved with romance fiction, I've been focused on how much still needs to be done with these novels as novels: how much more attention they deserve as works of literature, rather than as sociological facts or psychological symptoms. (Not that they shouldn't be studied every way imaginable, six ways from Sunday--I'm just saying that the literary side has been particularly neglected.)

So what do y'all think? Do folks who study the Western switch hit from fiction to film? What about mystery, SF, and so on? Leaving aside blogging for a moment, should the calls for papers we write for academic conferences--Popular Culture Association, the Brisbane conference, etc.--be 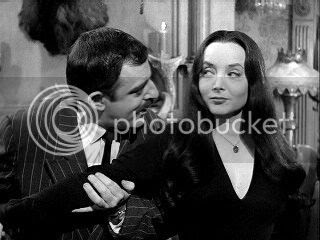 for papers on popular romance fiction, or on popular romance tout court? (Tish! You spoke French! Now that was a couple. "Everything I know About Romance, I Learned from the Addams Family," as a now-vanished on-line essay once put it. BUT they were a couple in a TV show, with no story arc to call their own. Do they belong in the discourse of romance scholarship--and if so, where?)

The second issue of interest in Jessica's post is the question of moral reasoning in romance. There is, of course, a long tradition of thinking about love as--at its most intense, anyway--somehow beyond good and evil. Sadly, I have to run and teach my Love Poetry class, so I'll come back to that topic on another day. Let me know what you think of the Question of Medium. Calls for papers--and my future courses--may depend upon it!

Morticia: So... you still desire me after all these years? The old ball and chain?
Gomez: Forever!
Morticia: I'll get them!

Morticia: Gomez.
Gomez: Querida?
Morticia: Last night you were unhinged. You were like some desperate, howling demon. You frightened me. Do it again!
Posted by E. M. Selinger at Friday, January 09, 2009