Open Not the Door 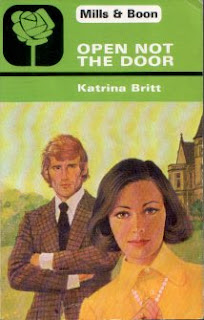 Katrina Britt's Open Not the Door (1978) might also be titled "open not the pages unless you don't mind reading some rather overt moralising, traditional ideas about femininity and some nationalist stereotypes".

Here's a statement from Laraine, the heroine of the novel, on the issue of cohabitation: "lots of people do appear to be living together if you believe the press, but there are many more who are decent and clean-living, and I happen to be one of them" (43).

"Clean-living" young women, it is further revealed, take an immense interest in feminine undergarments (unlike the non-clean-living young women, who it is implied may even dispense with night-wear altogether, or at very least show little interest in it!):

Margaret [...] signalled Laraine to follow her to a chintz-covered chest serving as a seat. Inside was the kind of cobwebby negligé a girl dreams about, frothy silk and lace with ribbons, all delicately made.
Laraine breathed in the delicate scent of pot-pourri as the garments were revealed between layers of tissue paper.
'They're gorgeous!' she cried. 'Thanks for showing them to me.'
Margaret replaced each garment almost reverently. 'I think every girl should have beautiful things to wear on her honeymoon. A pity that girls today don't seem to think much beyond a nightdress, and not always that. They miss such a lot by not being so essentially feminine.' (116)

Charles, who's the type of hero who, when angry, is prone to forcing the heroine's "lips to the will of his. [...] He was all cruel strength, punishing lips, and bone-cracking arms whipped tightly around her. When he released her, Laraine was like one who had been shocked out of her senses, pain and ecstasy together. Her bruised lips trembled at the thought" (154-55) eventually describes Laraine as

everything I'd looked for in a woman, demure, feminine, good company, with your lovely eyes filled with compassion for a poor little hedgehog and a girl in a wheelchair. I loved your sense of humour, your courage, your understanding and tolerance of human frailty. (186)

So there you go. Now you know what you have to do if you want to be a truly "feminine", "clean-living" woman.

Another aspect of the novel which I noticed, and which I thought I'd mention is the way in which particular national characteristics (which one might well term "national stereotypes") are presented.

Laraine, on arriving in Scotland looks around her: "She was imagining a land peopled by a fierce army of Borderers, big handsome horsemen, proud and independent, men who had inspired Walter Scott to immortalise them in his Waverley novels" (17). Charles's statement on the matter of the national character is that:

We Scots might descend from a savage race of Borderers, but we do now manage to live in a civilised manner. The traditions of the past are still dormant within us and we're a fiercely independent and proud race. [...] However, we respect and love our women, our land and our heritage. (37)

Laraine comes to the conclusion that

The world that Charles moved in was far different from her own. His was a world of wild Border country where old beliefs still existed from ancestors which made her own look pale in comparison [...]. They had carried the stamp of a fierce proud race, and Charles was no exception. (110)

There's also a brief description of an Italian doctor, which gives Britt the opportunity to generalise about the appearance of Italians: "Of medium height, with sleek black hair and liquid dark eyes gleaming [...] Dottore Padrilli was handsome with the beautiful bone structure of face often to be seen among the Italians" (175).

However complimentary they may be, such descriptions of individuals (or groups of individuals) which refer to their nationality as though this in itself ensures physical and/or emotional homogeneity are problematic. In the nineteenth century "a series of authors divided Europe's population into discrete and homogeneous national groups on the basis of sexual characteristics. These pseudo-objective taxonomies reflect the arbitrary figments of nationalist fantasy" (Maxwell 266). Unlike Britt's romances (and, in fact, many other romances which describe the exotic attractions of the foreign hero), many of these nineteenth-century male writers were particularly interested in describing female beauties and

They examined "specimens" for unique "characteristics"; botanical metaphors were frequent. An 1881 article in Leipzig's Illustrierte Zeitung, for example, discussed "the unique specialties of female local flora" in an article on Vienna's "Female Types." A German fashion magazine similarly wrote that Spanish women "grow and bloom in the fertile soil of Iberia, without troubles, without culture, like the flowers and fruits of this blessed land." Pseudoscientific authors suggested that readers, too, could learn to classify women by nationality, just as they might learn how to classify various shrubs or beetles. (Maxwell 268)

This pseudoscience did not restrict itself to outlining the physical characteristics of women along national lines. Personality as well as appearance were thought to be determined by nationality:

Jakob Ignjatović, a Serbian lawyer who briefly sat in the Hungarian parliament [in his] 1865 essay "The Serb and His Poetry" [which] appeared in the Slavisches Centrallblatt, a German-language newspaper published in Saxony. Ignjatović argued that [...]:

In every people [...] feminine beauty has a particular character. The German woman is characterized through her sky blue eye, her golden-yellow hair, the tenderness of her whole being, and her soft heart;—the Greek woman by her regular facial features, her fiery eyes, her proportional figure, and the lively expression of her heart;—the Italian by her beautiful oval face, her sly eyes, her adorable voice, and the lightness of her movements;—the Englishwoman by her friendly expression, the fullness of her developed body, and her worthy figure;—the Frenchwoman by her animated complexion, the loving expression of her face, and her noble bearing;—the Hungarian by the purity of her complexion, the Caucasian, almond-shaped eyes, trustfulness, and the expression of openness;—the Arabian her exceptionally beautiful deep, dark complexion, the whiteness of her teeth, the bold gaze and the masculine, almost angry features on her face.

All women are beautiful, but the character of their beauty depends on their nationality. This text powerfully illustrates how readily pseudoscientists ignored obvious facts: Ignjatović knew that not all German women have "golden-yellow" hair nor all Hungarian women good complexions.(Maxwell 277-78)

One might also observe that not all Englishwomen have friendly expressions, soft hearts are not solely to be found among German women and so on.1 Researchers from the University of Manchester's PUG (Public Understanding of Genetics) project observed in a recent leaflet that

Race, ethnicity, nationality are overlapping ways of thinking about how humans are different from and the same as each other. [...] Racial thinking often uses ideas of “natural” bodily substances - for example, “blood” - that are supposedly shared by people of similar geographical origin and transmitted through descent and that, in this way of thinking, shape both physical appearance and culture. Today, racial thinking is scientifically seen as invalid (1-2)

Genetics sees all humans as the same because, as a species, our common evolutionary origin in Africa means that we all share more than 99% of our genetic material. Genetics also sees humans as different because there are variations in genetic make-up. Although there is still some debate on the matter, most geneticists now think that these variations do not correspond to what people think of as racial, ethnic or national categories. There is no clear genetic basis for racial, ethnic or national thinking. (2-3)

I wonder when we'll see the door close on racial stereotypes (the Scottish barbarian, the arrogant, domineering Spanish/Italian/Greek macho hero, the noble Native American savage) in the romance genre.

1 Here's some more from Ignjatović, describing the Serbian woman:

She does not have the lightness and enchantingness of the Italian;—nor the docility of expression and loving heart of the Frenchwoman;—nor the solid and solicitous sweetness of the Englishwoman;—nor the light-hearted trustfulness and openness of the Hungarian;—but she does have something of the self-respect and pride of the Spaniard. She has the most in common with the Arabian woman. . . . All these characteristic features unite in the Serbian woman to an expression of heroism, through which she distinguishes herself from the women of all other nations. (qtd. in Maxwell 279)

He also produced a description of men of various different nationalities:

Every nation [...] has its own characteristic beauty. The German is handsome because of his gold-colored hair and soft blue eyes, the Frenchman because of his ideals and friendly facial expressions, the Spaniard because of his proud eyes, the Arab his dark complexion. The Serb, by contrast, does not have a soft appearance: his eyes spew fire. For this reason, the costume of a warrior suits him. The sight of a Serb in a frock coat is almost comical. (qtd. in Maxwell 287)