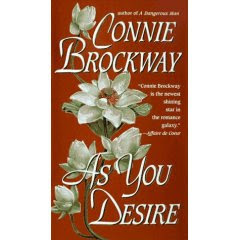 Laura Vivanco
Over at Reader, I Married Him Elizabeth is analysing Connie Brockway's As You Desire.

There are excerpts of the novel here and here, and a variety of rave reviews here, here, here. I did manage to find one slightly more critical review, which can be found here.

Elizabeth's post isn't a review, it's "a close reading of Connie Brockway’s As You Desire focusing on anti-colonial and Orientalist tensions within the book." Elizabeth elaborates both on the ways in which

Orientalist and romance novel tropes will be set up and elaborated upon at great length. These tropes will then be revealed as moments of intensely parodistic humor and dispelled by the actions or words of the “real” characters. [...] Brockway deftly takes up Orientalist stories and refashions them with parodistic humor into a world where Egypt is normalized, England is romanticized, and the entire process of constructing the other is laid bare as a foolish and ultimately immature process. Yet there are also elements of the book that did not ring true for me, moments where Orientalist themes were embraced as well as mocked.

and she takes a closer look at the real historical context in which the novel is set and the extent to which this is (or isn't) reflected in the novel. For example

The increasingly urbanized, educated, and technologically proficient class of Egyptians and Turkish-Circassian elites who by 1890 were articulating powerful and complex desires for national sovereignty is largely absent from the text. The first woman’s periodical, al-Fatah, was published in Alexandria in 1892. Political journals had been printed and distributed within Egypt as early as the 1870s. These journals catered to the increasing portion of Egyptians who were literate, politically engaged, and self-consciously nationalist. Fierce debates over the social roles of religion, women, national identity, and modernization were unfolding in Cairo just as they were unfolding in other urban centers of the time: London, Paris, Berlin, Istanbul, New York, Chicago… Cairo’s struggle to constitute an Egyptian form of modernity was vibrant, complex, and contemporary with European debates over the same issues.

Brockway conveys only a hint of this complexity.

Whether or not you've read the novel, I'd encourage you to go and read what Elizabeth has to say about it.
Posted by Laura Vivanco at Sunday, June 08, 2008