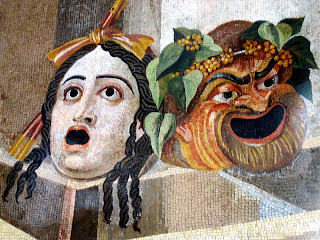 The Bad News - The Truth About Prairie Voles

Prairie voles might once have been thought suitable mascots for the romance genre, because, although "Fewer than 5% of mammals are habitually monogamous. Prairie voles (Microtus ochrogaster) are among the select few. After mating, the males "fall in love": they stick close to their chosen one, guard her jealously and help her raise their young." (BBC). Or so everyone thought. Now it turns out that

"monogamous" prairie voles are really just a bunch of randy rodents. A study published in Animal Behaviour found the prairie vole, Microtus ochrogaster, displayed considerable sexual promiscuity. Almost a quarter of litters were found not to have been fathered by the live-in partner of the mother prairie vole.

"There is a difference between social monogamy and sexual fidelity," said the study's main researcher, Professor Alex Ophir, of Florida University, Gainesville. "You can pair with a partner for life and still have sex with others - and that is what prairie voles do. There is a lesson there for humans."

The discovery of prairie vole promiscuity is crucial because these animals are favourite subjects among researchers, selected because they had displayed life-long monogamy. These previous studies also showed that dopamine, a brain chemical released during sex, played a key role in determining vole sexual behaviour.

Dopamine - the vole's love drug - causes males to lose interest in other females and acts on the nucleus accumbens, a region in the forebrain of many animals, including humans. Previous studies claimed dopamine locked the vole into monogamy and, by inference, played a similar role in humans - an idea that promised new ways of understanding, and possibly treating, serial promiscuity. (McKie, in The Observer)

I've been noticing that the hero's smell is often mentioned in romances. The description often goes something like this: "he smelled slightly of horse, soap and a scent that was uniquely his." And it seems that smell, particularly the one that's "uniquely his," is important in mate choice:

Among the constellation of genes that control the immune system are those known as the major histocompatibility complex (MHC), which influence tissue rejection. Conceive a child with a person whose MHC is too similar to your own, and the risk increases that the womb will expel the fetus. Find a partner with sufficiently different MHC, and you're likelier to carry a baby to term.

[...] At the University of Bern in Switzerland, human females were asked to smell T shirts worn by anonymous males and then pick which ones appealed to them. Time and again, they chose the ones worn by men with a safely different MHC. (Kluger, in Time)

And in addition, to paraphrase the lyrics of Betty Everett's "It's In His Kiss" just a little, "if you wanna know, if his MHC is different from yours, it's in his kiss, that's where it is":

if the smell of MHC isn't a deal maker or breaker, the taste is. Saliva also contains the compound, a fact that Haselton believes may partly explain the custom of kissing, particularly those protracted sessions that stop short of intercourse. "Kissing," she says simply, "might be a taste test." (Kluger, in Time)

There's even a scientific basis for all those couples in romantic suspense who fall in love really quickly:

Meeting a stranger when physiologically aroused increases the chance of having romantic feelings towards them ... It's all because of a strong connection between anxiety, arousal and attraction. In the "shaky bridge study" carried out by psychologists Arthur Aron and Don Dutton in the 1970s, men who met a woman on a high, rickety bridge found the encounter sexier and more romantic than those who met her on a low, stable one. (Case, in New Scientist)

The Bad News - HEA may turn to Increasing Irritation

The initial glow of falling in love tends to wear off, as described in detail in Kate Nash's "Foundations" (lyrics here, and video and song here), and:

If your spouse already bugs you now, the future is bleak. New research suggests couples view one another as even more irritating and demanding the longer they are together. [...] [Kira] Birditt and U-M colleagues Lisa Jackey and Toni Antonucci looked at how negative views of spouses, friends and children changed over time [...] In all age groups, individuals reported viewing their spouse as the most negative compared with children and friends. The negative view of spouses tended to increase over time. (MSNBC)

Psychologists studying relationships confirm the steady decline of romantic love. Each year, according to surveys, the average couple loses a little spark. One sociological study of marital satisfaction at the University of Nebraska-Lincoln and Penn State University kept track of more than 2,000 married people over 17 years. Average marital happiness fell sharply in the first 10 years, then entered a slow decline. (Schechner, in the Wall Street Journal)

For some people, however, that initial glow never fades: there are

men and women who say they live in the thrall of early love despite years of marriage, busy jobs and other daily demands that normally chip away at passion. Most couples find that the dizzying, almost-narcotic feeling of early love gives way to a calmer bond. Now, researchers are using laboratory science to investigate [...those] who live fairy-tale romances. (Schechner, in the Wall Street Journal)

Aron has conducted fMRI studies of some of those stubbornly loving pairs, and initial results show that their brains indeed look very much like those of people newly in love, with all the right regions lighting up in all the right ways. "We wondered if they were really feeling these things," Aron says. "But it looks like this is really happening." (Kluger, in Time)

For more on the science of love, RfP's got an index of Time's annual Mind/Body special issue on the theme of "The Science of Romance". 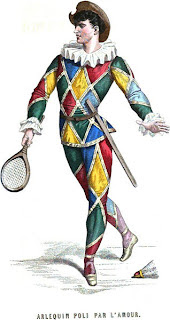 Harlequin's Valentine's site is now up and there are free short online reads available: an inspirational romance, Family Ever After, by Linda Goodnight, and a vampire paranormal, Desire Calls, by Caridad Piñeiro.

The RNA 2008 Romance Prize for category romances was won by Kate Hardy's Breakfast at Giovanni's. It'll be out in the US in April, with the title In Bed with her Italian Boss.

AAR's Annual Reader Poll closes on the 17th of February 2008. Only novels with a "first US publication date (copyright date) of 2007" are eligible. Laurie Gold has clarified that readers who don't usually visit AAR are eligible to vote: "we want more than simply AAR’s readership involved; we want to draw from the entire community of online romance readers."

The first illustration, from Wikipedia, is of the "theatrical masks of Tragedy and Comedy in refined mosaic" originally from Hadrian's Villa and now at the Capitoline Museums, Rome.

The second illustration is of Harlequin, from Wikimedia Commons.
Posted by Laura Vivanco at Monday, February 11, 2008