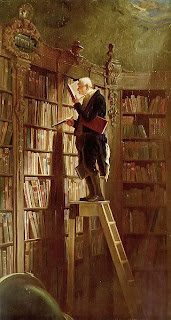 Laura Vivanco
Eric's at Romancing the Blog today and he's got an idea he'd like to discuss:

what if someone, or a group of someones, put together lists of romance novels, grouped by theme or genre or some such way, and wrote up introductory essays and discussion questions for each? It wouldn’t be easy to choose the texts, and Lord knows there would be dust-ups over who’s in, who’s out, and the rest. But last month a group of librarians published a well-received guide to “core authors” in romance. It’s aimed at colleagues who want to build a collection, and also at curious readers. Maybe that could be a place to start?

I know there have been some wonderful individual programs at libraries around the country. Kelly Watson posted a great column on them a week or so ago, with links to the finalists and winners of the RWA’s “Libraries Love Romance” contest. Those have been developed locally, though–and what makes the Nextbook program so successful, simply as a promotion, seems to be its “off-the-shelf” structure. All any library has to do is find someone to lead the conversation.

In the light of the long comments thread which resulted from Sarah's attempt to provide an even shorter selection of romance novels for her classes, and in which the relative absence of romances by African-American authors was raised as an issue, I feel I should observe that the RUSQ Core Collections list is rather lacking in AA authors and AA romances. I may have missed some names, but as far as I can tell, there aren't any on the main list. There is a mention of AA romances, and one AA author, in the introduction to the section on contemporary romances:

The librarians who put together the list were limited in space, so they obviously had to leave out a huge number of books and sub-genres. The inspirational romance sub-genre is only touched on in passing, as mentioned in the above quotation, which also contains one of the few references to category romances (one category romance is included in the more detailed list, in the paranormal section). As Eric says, "It wouldn’t be easy to choose the texts, and Lord knows there would be dust-ups over who’s in, who’s out, and the rest" but how would you feel about a structured programme for library-based romance discussion groups? Does your library already do something like this? If you've got any ideas, please let Eric know what you think.

On the topic of selectivity versus recognition of diversity, I was gratified to see that the latest article in The Telegraph about Mills & Boon, written by Glenda Cooper, draws on the work of jay Dixon and discusses the way the novels have changed throughout the decades:

The earliest heroes tend to be imperialist adventurers who, towards the end of the Edwardian era, still represented an ideal. The heroines are equally intrepid, with Dorothy Gale, in Louise Gerard's A Tropical Tangle (1911), going off to be a nurse in darkest Africa.

In the shattering aftermath of the First World War, a different type of hero emerges. The golden youths who died in the trenches were the brothers and fiancés of M&B authors, so vulnerable boy heroes populate the 1920s romances, while it is women themselves who are presented as sexually assertive.

In Denise Robins's Women Who Seek (1928), the heroine Eve pursues an adulterous relationship with her lover. M&B had no problem with extramarital sex until the more prudish 1950s.

As the Depression years take hold, heroes are father-figure types; passion comes a poor second to hunger. The heroines tend to have jobs - even after they get married, which was not common at the time.

As the Second World War begins to dominate storylines, there is a focus on women in uniform who display a markedly pragmatic attitude. [...]

Ironically, it was only when M&B ditched its other genres and focused on romance that female characters became less assertive. Alan Boon, son of founder Charles, who took over after the war, was an advocate of the alpha [m]ale concept [...]

It was in the 1960s and 1970s - as the women's movement gained impetus - that M&B developed its anti-feminist reputation. This was largely due to its star author, Violet Winspear [...]

In the 1980s and 1990s, when many of the battles of the women's movement had been won, M&B authors ushered in more sympatico New Men as heroes, and increasing numbers of career women - lawyers, journalists, petroleum engineers - as heroines.

This being both Mills & Boon's centenary year and very close to Valentine's Day, there have been a lot of articles in the press recently about romance novels. There's a list of many of them at Dear Author.


The illustration is by Carl Spitzweg, "the master of small-scale genre painting" (Milwaukee Art Museum) and depicts "Der Bücherwurm" (the Bookworm), who looks as though he's trying to make a selection from among all the books in his library. I found it at Wikimedia Commons.
Posted by Laura Vivanco at Wednesday, February 13, 2008