I've been thinking about the history of popular romance, and how I'm not even sure when the term "romance" started to be used as a marketing term to refer exclusively to love stories with happy endings (as opposed to how it was used before: there are a lot of nineteenth century works subtitled "a romance" which are not necessarily at all what we'd now think of as a romance). Even when love stories are marketed as romance, I'm not sure when the term became associated with a guarantee of an HEA/HFN.

Dear Romancelandia,
"Romance novel" doesn't mean genre romance to everyone & has only been used that way since the late 1900s. Before, it meant "a narrative genre involving a mysterious, adventurous, or spiritual story where the focus is on a quest...not always a love interest."

I think Jackie Barbosa's got the dating about right (the meaning definitely seems to have shifted after 1900) but when the balance tilted definitively away from "adventure" and towards "love story" is probably something that needs to be investigated more thoroughly by romance scholars. Here are some signposts I've come across which indicate changes in the meaning of "romance" as a publishing label.

It's a page from The Bookfellow from 1 October 1912

The first book listed is Ethel M. Dell's The Way of an Eagle, which mixes adventure with a central love story that has an HEA. The description of the second book doesn't suggest it includes any sort of love story. The third book seems to be a love story without any adventure.

Sometime in the 1920s there's at least one edition of The Flapper Wife which includes the word "romance!" to describe the works of Beatrice Burton (see https://thegoodbadbook.wordpress.com/2020/04/15/determining-editions-the-flapper-wife/ )

Unfortunately this edition of the novel doesn't include a dust jacket: https://archive.org/details/flapperwife0000unse/mode/2up

However, I did find another novel by Grosset & Dunlap there, from 1928, which has endpapers that refer to Beatrice Burton's books as "romances"

I'm not sure when Dell started publishing novels which it labelled as "romance" but it may have been in the 1930s. Jennifer McKnight-Trontz's The Look of Love includes an image of Faith Baldwin's Skyscraper (Dell 236) and Self-Made Woman (Dell 163) which have the words "A Dell Romance" on the cover. The first is from 1931 and the second from 1932. Here are two more Dell romances published by them somewhat later:

I think these Dell editions are reprints, but still from the 1940s. What I don't know is whether all the books in this line would be classified as romances now. From a quick look inside, I get the impression that The Pink Camellia would. However, although Stars Still Shine ends on an optimistic note for the heroine, there isn't an HEA with the person she's been in love with.

The front cover of this 1944 edition of Popular Love magazine says it contains "New Romances of Modern Youth" https://archive.org/details/PopularLoveV15N03194401 and inside, on page 97 it promises readers 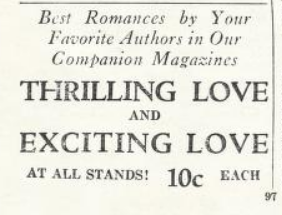 Moving on to the 1950s, The Romance Book Club produced a lot of reprint editions. Were they all romances in the modern sense? Here's an example which I think is: Faith Baldwin's Give Love the Air https://archive.org/details/giveloveair0000unse/mode/2up

[Edited to add] Still in the 1950s, there was "Pearson's Romance Library [...] (Cahill and Co. Ltd., 1955-60)" producing "digest-sized British romance pulp" (according to this comic sales site). I just saw an example for sale on Ebay which is by Mary Burchell and according to Goodreads this novel was originally published in 1942 by Mills & Boon.] 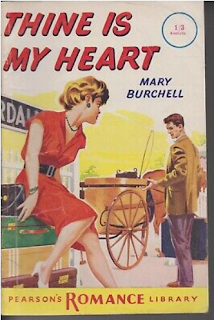 I also don't know when Mills & Boon started to refer to their novels as "romances." In The Art of Romance: Mills & Boon and Harlequin Cover Designs it's mostly just the front of the dust-jackets that are printed so it's possible that the word appeared on the spines or elsewhere for some of them and I wouldn't know. One cover from 1942, for Frances Braybrooke's They Called Her Evil, has the words "A Mills & Boon Love Story" on its cover (55) as do some others from this period. In this volume, the first cover with "romance" used as a description on it is Barbara Allen's Doctor Lucy (1958) which is "A Harlequin Romance" but I doubt it's the first novel to appear with that label. 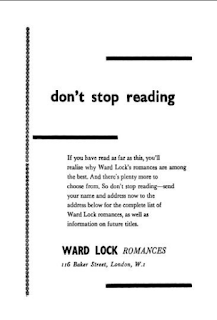 I think the Ward Lock "Blue Panel" romances may date from the 1960s but I'm not sure as this edition of Marsha Manning's Magic of the Moon only gives a copyright date of 1919: https://archive.org/details/in.ernet.dli.2015.126414/page/n189/mode/2up?q=ward+lock+%22blue+panel%22+romancesA list of some more of them appears on the next page.

[Edited to add: Another issue to note is that in the UK the Romantic Novelists' Association was founded in 1960. Its name reflects a wish to include a wider range than just "romance" and I don't know to what extent that reflected the UK market at the time but certainly nowadays the UK market does seem different from the US one in terms of what might be understood by "romance." Possibly there was some convergence on a shared meaning followed by some decades of divergence?]