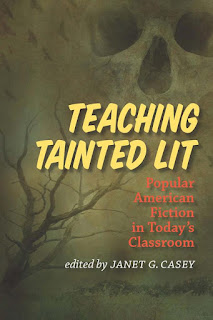 Losano details the difficulties she had teaching popular romances. On her first attempt she introduced Heyer's Frederica to a "senior seminar course on canonicity and literary aesthetics" (81) but


Unfortunately, Heyer's novel was received with only derision and contempt. [...] The kicker came [...] when one student confessed that he didn't actually think much of either [...] Pride and Prejudice or Frederica. Maybe if he'd read Pride and Prejudice in a different context, he argued, he wouldn't have noticed that it was just about romance and not much else. Much of the rest of the class nodded in agreement. (82)

That did set Losano's teaching of popular romance back for a while, but she kept trying and eventually found more productive ways to bring popular romance fiction into the classroom. There's an excerpt of her article here.