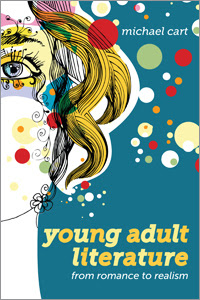 The discussion of happy endings and the romance novel genre continues on the RomanceScholar listserv, and with permission, I'm reposting here something that Amanda Allen, an English professor with a specialty in Children's Literature, contributed to the discussion.


I find this conversation fascinating in terms of the history of YA. I study junior novels, which are predominantly romance novels for young people (1942-1967) that predate canonical young adult literature. The junior novels are heavily dedicated to the HEA, and often end with the exchange of a class ring or pin (suggesting, of course, future marriage).

What is interesting in terms of this conversation is that the ending of the junior novel genre coincides with the rise of canonical YA (in 1967), and what is known as the "New Realism." Whether or not the New Realism is realistic is... well... debatable, but it is predicated specifically on negating a) romance narratives generally, b) HEAs specifically, and c) the feminized field of early YA. In other words, the New Realism purposely defined itself around anti-romance narratives that focused on gritty (and often depressing) situations that were written predominantly by men (or women whose initials masked their gender--think S.E. Hinton) and aimed at a male audience.

1967 is thus a key date in the history of young adult literature, but I think it plays a similar role in defining Americans' disdain for the HEA (at least as it relates to YA).

If people are interested in this version of the history of YA, Michael Cart's From Romance to Realism: 50 Years of Growth and Change in Young Adult Literature may be helpful. It's somewhat outdated now (and a little problematic), but chapter one, "From Sue Barton to the Sixties" and chapter two, "The Sixties and the Rise of Realism" include some great contextual history.