Art and Craft: Bachelor Dad on Her Doorstep (1) 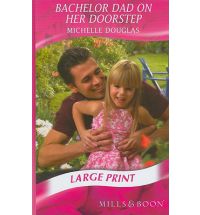 Michelle Douglas, the author of Bachelor Dad on Her Doorstep (2009), "made my heroine and hero, each in their own way, artists" and I was intrigued by the ways in which the novel touches on matters related to art and books and hints at possible similarities between them.

The novel is dedicated "To Varuna, The Writers' House" and, as Douglas has written, "The inspiration for Bachelor Dad On Her Doorstep came from a setting: the Australian Blue Mountains where I spent a week on a writers’ retreat," presumably at Varuna, which "is in the World Heritage Area, the Blue Mountains region of New South Wales, Australia." Since Douglas's "favourite place in the mountains is Leura – seriously cute, plus it has one of my all-time favourite bookshops [...] I based my fictitious town of Clara Falls on Leura."

Jaz Harper, Douglas's heroine, owns a bookshop on the "main street" (15) of Clara Falls, so the novel literally places books at the heart of the community. In the final chapter a book fair gives Clara Falls the chance to demonstrate that "In this town [...] we pull together" (267); there are "Oodles and oodles of people. All mingling and laughing out the front of her bookshop" (265) and "a cheer went up when the townsfolk saw her" (266). Like Jaz's biker friends, this chapter seems to suggest that "supporting independent bookshops is a good cause" (146).

Jaz, who also "mean[s] to open an art gallery" (164), brings together books and art when she decides to decorate the bookshop, formerly owned by her mother, with a mural of the dead Frieda:

She'd sketched in the top half of Frieda's face with a fine pencil and the detail stole his [Connor's] breath. [...] Beneath her fingers, her mother's eyes and brow came alive - so familiar and so ... vibrant.
Jaz had honed her skill, her talent, until it sang. The potential he'd recognised in her work eight years ago - the potential anyone who'd seen her work couldn't have failed to recognise - had come of age. (112)

Brief as this passage is, it seems to suggest that the production of the best art requires practice as well as raw talent and this lesson is emphasised later in the novel when Jaz encourages Connor Reed, the hero and Jaz's former boyfriend, to pick up some charcoals and try sketching for the first time in years:

He'd lost count of how many pictures he'd drawn. [...]
Jaz sighed and chuckled and teased him, just like she used to do. She pointed to one of the drawings and laughed. 'Is that supposed to be a bird?'
'I was trying to give the impression of time flying.'
'It needs work,' she said with a grin. [...] 'But look at how you've captured the way the light shines through the trees here. It's beautiful. [...] You can draw again, Connor.' (174-75)

Jaz forces him to draw because she wants him "to know its joys, its freedoms once more ... to bow to its demands and feel whole" (170). This perhaps describes the experience of creativity not just of visual artists, but also of those who are creative in other media, including writers.

In addition, it seemed to me that the novel explores what can be classified as "art." In their youth Jaz and Connor used to

take their charcoals and sketch pads to one of the lookouts.
She'd sit on a rock hunched over her pad, intent on capturing every single detail of the view spread out before her, concentrating fiercely on all she saw. Connor would lean back against a tree, his sketch pad propped against one knee, charcoal lightly clasped, eyes half-closed, and his fingers would play across the page with seemingly no effort at all.
Their high school art teacher had given them identical marks [...]. Connor's drawings had [...] captured an essence, the hidden potential of the thing. Connor had drawn the optimistic future. (50)

It is perhaps logical, given the nature of his talent, that Connor "hadn't picked up a stick of charcoal since" (42) Jaz left town and he no longer envisaged an "optimistic future" for himself; he

However, although Jaz is led to believe that Connor has "given up his art" (52) and is now merely "Painting shop signs [...] All that potential wasted" (50-51), and despite the fact that he believes he has "turned his back on art to become a carpenter" (169), when Jaz sees the "handmade wood-turned furniture" (189) he has made, "She marvelled at their craftsmanship, at the attention paid to detail, at the absolute perfection of each piece" (189) and tells him that "you didn't give up your art. You just ... redirected it" (190).

For her part, Jaz is now "a world-class tattoo artist, if Frieda's boasts could be believed" (43) and despite the fact that she herself used to think that "Connor had more talent in his little finger than she possessed in her whole body. She merely drew what was there, copied what was in front of her eyes" (50), in fact when she creates a tattoo it

wasn't just any simple tattoo. It was an indelible photograph captured on this man's arm for ever.
It was a work of art. (152)

To the man who has been tattooed, however, it is "a memorial" (153) to his dead daughter. Thus, like Connor's carpentry, the tattoo is art which is very functional.

Art, this novel seems to suggest, is not limited to 'high' culture, but can be found in creations which might be described as 'craft,' or 'popular culture.' Indeed, one might even wish to add to that list the work of Mr Sears, the baker. His carrot cake "tasted divine" (101) and he certainly behaves as though he considers his creations to be special: "he placed each of the three cakes in a separate cardboard box with the same care and reverence mothers showed to newborn babies" (146).