Laura Vivanco
Yesterday (12 July) Amy Burge gave a paper at the International Medieval Congress as part of a panel about "Exploring the Public Understanding of the Middle Ages: The Reception of Medievalisms in Contemporary Pop Culture." The panel offered "three perspectives on the interpretation of the medieval world in contemporary popular culture, with a particular focus on how these pieces of popular medievalism interact with, and potentially influence, how the public understands the medieval world." Amy's paper was

'You're marrying me because of that! But that's… that's archaic… medieval…': Negotiating Female Agency of Text and Reader in the Use of the Medieval in Contemporary Sheikh Mills & Boon Romance
Amy Burge, Centre for Women's Studies, University of York 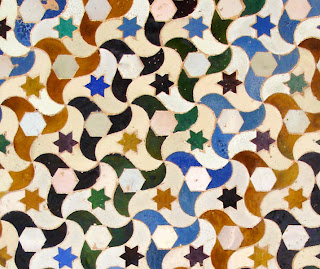 There will also be some discussions of romance at Readercon, which begins tomorrow:

Paranormal Romance and Otherness. Victoria Janssen (leader), Alaya Dawn Johnson, Toni L.P. Kelner, Kate Nepveu, JoSelle Vanderhooft. In science fiction, aliens are often used to explore aspects of otherness in our own society, such as gender and race. How are the mythical creatures of paranormal romance and urban fantasy being used to explore these same issues? What are the advantages and the pitfalls for writers?

Are We Not Men?: Human Women and Beast-Men in Paranormal Romance. Stacy Hague-Hill, Victoria Janssen (leader), K.A. Laity, Delia Sherman, Ann Tonsor Zeddies. In a 2009 blog post, Victoria Janssen wrote: "Paranormal romance almost always features the hero as a paranormal being and the heroine as an ordinary human. How does this resonate with gender relations and power relationships in our society? And is it emblematic of women seeing men as Other?" In addition, many of these stories feature women who metaphorically or literally tame men who have non-human aspects, turning them from bestial creatures driven by base urges into civilized, socially acceptable mates. We examine the social context of this narrative and its appeal to paranormal romance readers of various genders.

Another panel which caught my eye was

The Quest and the Rest. Greer Gilman, M.C.A. Hogarth, Kelly Link, Kathryn Morrow, Robert V.S. Redick, Madeleine Robins (leader). In a 1951 letter, J.R.R. Tolkien wrote that Samwise and Rosie's romance, though understated, "is absolutely essential to... the relation of ordinary life (breathing, eating, working, begetting) and quests, sacrifice, causes." Works as varied as Lois Bujold's Vorkosigan series, Stephen King's Lisey's Story, and Gail Carriger's Parasol Protectorate novels overtly interweave speculative elements with themes such as love, marriage, parenthood, and holding down a steady job. Does the mundanity of responsible adulthood interfere with escapism, or are readers thrilled to have protagonists they can identify with? How do different authors and narratives handle the tension between the intimate and ordinary and the vast and mysterious?

It's nice to have romance be considered the mundane part of a fiction; it makes a change from accusations that the romance genre is escapist and unrealistic.

The image is a "Digitally enhanced photograph of a wall tiling at the Alhambra, in Granada" (by Dmharvey and downloaded from Wikipedia). Given the topic of Amy's paper, it didn't seem inappropriate to further distort the original a little as I resized it.
Posted by Laura Vivanco at Wednesday, July 13, 2011