The Real-Life Effects of Fiction

Laura Vivanco
Amanda B. Diekman, Mary McDonald and Wendi L. Gardner's “Love Means Never Having to be Careful: The Relationship Between Reading Romance Novels and Safe Sex Behavior” should perhaps have been included in my summary of academic studies of romance readers' sexuality, but I thought it really needed to be given a post of its own because of the discussion it contains regarding the relationship between reality and fiction.

Romance readers are aware that what we are reading is fiction, and we can and do distinguish between fantasy and reality. In particular, I recall many readers making statements to the effect that while they enjoy reading about alpha males, rakes, werewolves, etc, they would not want to have a relationship with this kind of being in real life (although some other readers mentioned that their spouses were "alpha males").

That being said, however, romances clearly do have some effects on some of us, at least some of the time. As mentioned in my previous post, Anderton found that

One of the effects of romance reading that I've most often seen mentioned is the way in which it can make people feel happier. Jennifer Crusie, for example, has mentioned that after reading romances for the first time "I’d come out of my reading transformed, feeling more confident and much happier."

Diekman, McDonald and Gardner suggest that

The inevitable happy endings and escapism of romance novels are a major selling point (Maritz Marketing Research, 1999; Radway, 1984). Evidence suggests, however, that such fantastic qualities can influence readers’ real-life beliefs and attitudes. Fictional information is incorporated into memory (Gerrig & Prentice, 1991; Prentice & Gerrig, 1999; Prentice, Gerrig, & Bailis, 1997; Wheeler, Green, & Brock, 1999), and unless cognitive resources are available, even blatantly false information is remembered as true (Gilbert, Tafarodi, & Malone, 1993). Women often read romances to escape from busy lives (Radway, 1984); therefore, they may not be motivated to engage in the effortful processing needed to discount false information or to scrutinize persuasive messages (Chaiken, 1987; Petty & Cacioppo, 1986; Prentice & Gerrig, 1999). Moreover, fiction’s narrative form and its ability to transport the reader into a vivid and involving fictional world are powerful persuasive tools in and of themselves. Green and Brock (1996) found that persuasion increased to the extent that readers were “transported by what they read, despite the fact that all stimuli were clearly labeled as fictional. Especially important for our present concerns, this persuasion effect was greater for abstract beliefs and general attitudes than for more concrete items of information. These accumulated findings suggest that, although romance readers may be fully aware that the portrayals of spontaneous, passionate, and risk-free sexual encounters are fictional, they nonetheless are likely to form beliefs and expectations based on such reading. (180, emphasis added)

This, I think, tends to support Robin/Janet's suggestion, made at DearAuthor, that

the relationship between the genre and larger society is complex and not directly translated or translatable.1 We see some of the same tensions in the genre we see in society, vis a vis the way women define themselves and manage relationships and love. But I also think the genre, like society, passes things along without a whole lot of reflection and examination, including attitudes about how women are valued and value themselves, and how different standards of value apply to men and women.

Robin wrote this in the context of a discussion about the value the genre often places on female virginity. Diekman, McDonald and Gardner's evidence that romances can influence attitudes and behaviour is focused on condom usage, but this, in turn, is tied in to a central fantasy that is common in the genre: 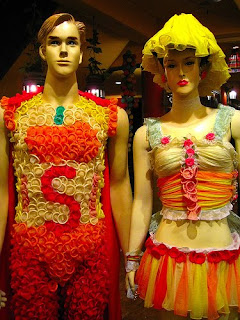 According to the sexual script portrayed in romance novels, true love is demonstrated by being "swept away" in passion. To the extent that this traditional romance script influences romance readers' own sexual scripts, readers may express greater reluctance to engage in precautionary sexual health behaviors, such as using condoms. We explored the relationship between women's reading of romance novels and their attitudes toward condom use, reports of past condom use, and intention to use condoms in the future. A systematic content analysis of modern romance novels documented the extremely low incidence of portrayals of condom use in initial sexual encounters.2 Study 1 demonstrated that high levels of romance reading were associated with negative attitudes toward condoms and reduced intent to use condoms in the future: Study 2 showed experimentally that including safe sex elements in romance stories increased positive attitudes toward condoms and marginally increased intent to use condoms in the future. (Abstract)

What I find particularly important about this study is not so much what it has to tell us about condom usage in romances, or romance readers' perceptions of condoms, but the evidence it offers that novels can influence readers' real-life attitudes and behaviours.
----------


1 In response to my previous post K. A. Laity left a comment recommending an article by Joanna Russ. I followed up her suggestion and although I couldn't find the article itself, I did locate some commentary on it by Susanna J. Sturgis who has written that

My favorite among the essays in Joanna Russ's wonderful collection Magic Mommas, Trembling Sisters, Puritans & Perverts is "Pornography by Women for Women, with Love." In her essay [...] Russ suggests that "sexual fantasy can't be taken at face value."

Robin/Janet seems to be suggesting a similar need for caution in interpreting romances.

2 Their sample of 78 novels included only contemporary romances, not historicals, as they "felt it would be unrealistic to expect portrayals or discussions of condom use in historical romance novels" (181) and "The sampled novels represented the work of 46 authors and 21 publishers. Publication year ranged from 1981 to 1996, with 54 (69.2%) of the novels published after 1990, when awareness of HIV and other STD among heterosexuals was relatively high" (181). They found that "only 9 (1 1.5%) novels portrayed condom use" and

They note that the lack of condoms in so many of the novels, and the rejection of them in others,

cannot be attributed to an idealized version of the modem world. The romance novels in our sample portrayed a host of other concerns: divorce and remarriage, single motherhood, dual-career conflicts, caring for aging parents, substance abuse, mental illness, and breast cancer, to name but a few. (181)

I think it might be more accurate to say that the authors of the novels, like all authors, select which aspects of reality they will include. In romances it seems that there are certain realities which are often deemed unromantic and which therefore tend not to be included in romances. Kris Kennedy's list of "Top Medieval History Facts You Won't See in Romance" provides some examples (although some of her "facts" are disputed in the comments).

The photo was taken by Shane R. and I am using it in accordance with its creative commons license. If you can't work out the connection between it and the topic of Diekman, McDonald and Gardner's essay, you might need to look at it a little more closely, or read Shane R's description of it.
Posted by Laura Vivanco at Saturday, January 16, 2010