Essential Words: "I Love You" 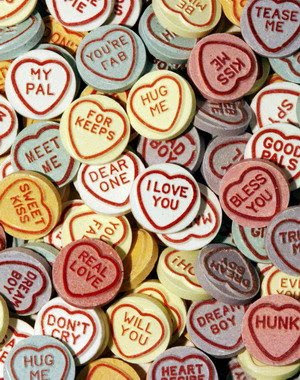 According to Pamela Regis, one of the "eight essential elements of the romance novel" (30) is "The Declaration," "The scene or scenes in which the hero declares his love for the heroine, and the heroine her love for the hero" (34). She adds that "In romance novels from the last quarter of the twentieth century marriage is not necessary as long as it is clear that the heroine and hero will end up together" (37-38). Jan Cohn explains the primacy of the declaration of love thus:

The proposal of marriage belongs to the tradition of comedy, but the declaration of love comes properly from romance. [...] The knowledge of her own love is accessible to the heroine, a discovery she can make. She cannot, however, learn by herself of the hero's love; that love must be announced, and it is, in fact, the saying that matters, the speaking of the word. [...] With the resonance of ritual, the word "love" is uttered at the denouement of every romance. [...] The formulaic, even ritualized significance of the declaration of love cannot be exaggerated. "Declaration," in fact, is an inadequate term; it is as confession, as something wrung from the hero, that love is spoken. A ceremonial, even an incantatory word, "love" brings with it the profound and permanent metamorphosis into union toward which the story has inexorably driven. (32-33)

Lisa Fletcher's discussion of the phrase "I love you" expands on this idea of the declaration of love as a ritual:

a performative utterance contains its own referent; the act does not precede the utterance. To utter "I love you" is, in both the Austinian sense and in common understanding, to do something; love is not declared/confessed/promised until these "three little words" are spoken. It is not enough for the amorous individual to behave lovingly towards his or her beloved; he or she must say "I love you." (26)

Romance can only quote. "I love you" is always and only a reiteration; yet to maintain its descriptive status, it must assert its originality or uniqueness at each utterance [...] it both claims a particularly intimate moment for its speaker ("I (like no other) love you (like no other)") and, retaining its ubiquitous history and corresponding reiterative force, continues to circulate as an infinitely and endlessly appropriable utterance. To this extent it conforms to the interpretation of myth offered by Barthes in Mythologies. As a mythic utterance, "I love you" carries the baggage of innumerable citations. At each utterance, however, "I love you" is emptied out, its history hidden, in order to facilitate the supposed and essential uniqueness of the particular relation it intends to communicate. [...] "I love you" is both a confession and a cliché; it is simultaneously meaning and form - an apparently empty utterance to be refilled by each lover, but which silently retains its history. (30)

It's also an utterance which is refilled by each author, and I'm sure we all have on our virtual or real "keeper shelves" romances in which the utterance of those words was particularly moving or interesting to us.

That said, are those three very specific words an utterance which it is essential to include in order for the novel to be a romance? When Jessica reviewed Stephanie Laurens's Devil's Bride, many commenters responded by saying that it was one of their very favourite of Laurens's novels. Yet Kaetrin observed that it isn't, in fact, until a later novel in the Cynster series that the hero of Devil's Bride actually says "I love you":

On a Wicked Dawn (I think I have that right - it was the second one of the twins books anyway and their titles are disconcertingly similar…) [...] is [...] the book **Minor Spoiler** where Devil finally says “I love you” to Honoria - (did you notice he didn’t in DB?) and after I read DB, I went back and re-read it and it was delicious!!

In Jennifer Crusie and Bob Meyer's first collaborative novel, Don't Look Down, Crusie insisted on the inclusion of the "mythic utterance":

When we presented in Reno at National last year the crowd of 300 women hissed at me when Jenny told how my hero never said "I love you" to the heroine in the course of the book. So I rewrote, bowing to the pressure, and as the chopper comes flying in for the final showdown and JT is standing on one skid and Lucy is standing on the other side on the other skid, he yells across the cargo bay: "Hey, I love you." Well, that didn't go over well either. (He Wrote, She Wrote)

I just noticed that two of the questions in the readers' guide for their second novel, Agnes and the Hitman, were "Did you notice that neither of them ever say 'I love you'? Did that make you distrust their future at the end?"

The photo of the love hearts comes from www.lovehearts.com. The hearts can carry a variety of declarations/confessions/promises/questions, but it's noticeable that the one in the very centre of the photo is the one with "I love you" written on it.
Posted by Laura Vivanco at Friday, May 29, 2009