Come Now and Look at Me 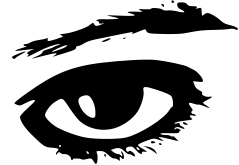 Not so long ago Jessica wrote a post titled "“Come for me, baby”: orgasm on command" in which she asked

Why is this phrase (and its variations) so ubiquitous in romance? You don’t believe me? Well, here’s a list complied ONLY from my bookshelf of maybe 30 titles. I bet you can think of many more.

Of course there's an element of dominance/control involved, and as Jessica asks, "was it the Office of Alpha Hero Protection that issued the dictum (heh) that in order to enhance Alphaness, heroes must control even this aspect of lovemaking?" But I suspect there might also be an element of bonding involved, of becoming, in the words of Matthew 19, and repeated in the marriage ceremony "one flesh."

Jessica's post reminded me of another frequent command issued by heroes, namely that the heroine look at him as she has her orgasm:

The blood was pounding in his head, roaring in his ears, yet his body continued to move slowly with hers. Balanced on the edge, David said her name a last time.
"Aurora, look at me." When her eyes opened, they were dark and aware. "I want to see where I take you." (Roberts 591)

And here's a similar example:

Byron realized suddenly that it was not enough for there to be pleasure given and taken. He wanted Victoria to be aware of him, as aware of him as a man as he was of her as a woman. She was beautiful like that [...] beautiful with her tightness clasping him intimately, as if she would turn them both into one marvelous animal. But he did not want her to plunge into ecstasy alone. He wanted her with him as she went over the edge - he wanted to be a part of that beauty at its climax. [...] "I'm here," he whispered. "Look at me. Remember - I am with you."
She opened her eyes and met his gaze. "For now," she agreed. (Joyce 67)

Again, I think the command is part of an attempt to bond the two more closely. I wonder if there's any lingering literary and emotional significance derived from much earlier medical/scientific ideas about the power of the eyes. In the Renaissance it was thought that eyes could potentially have a powerful effect:

"Love's arrows," held in high esteem by the French poets of the Pleiade, were not, for Ficino, a mere metaphor. They were equipped with invisible pneumatic tips able to inflict severe damage on the person shot. Had not Plato already said that love was a kind of ocular sickness (ophthalmia: Phaedo, 255c-d)? And did not Plutarch ascribe to sight a "miraculous force"?
Regarding the "evil eye," fascination or jettatura, its etiology is the same:

Fascination is a force which, emanating from the spirit of the fascinator, enters the eyes of the fascinated person and penetrates his heart. Spirit is therefore the instrument of fascination. It emits from the eyes rays resembling itself, bearing with them spiritual quality. [...]

So speaks Agrippa of Nettesheim, after Ficino. (Culianu 30)

As mentioned above, this scientific explanation of the function of the gaze influenced literature:

In late medieval literature [...] the arrow does not always proceed directly to the heart, but strikes the lover first in the eyes. This bizarre trajectory becomes more comprehensible when we realize that the poets have associated the arrow of Love with either the glance or the image of the beloved, which enters through the lover's eyes but pierces deep within. (Stewart 13)

Donaldson-Evans clarifies that this imagery has a very long literary history:

when love is born not simply as a result of seeing the Beloved but by the active participation of the Beloved's glance, then we are dealing with a specific tradition which can be traced back to early Greek classical literature. It is, in fact, a topos which, since it has gone unnamed until now, we propose to call the Aggressive Eye Topos. (202)

Its scientific basis, according to Donaldson-Evans, contributed to its longevity:

such imagery is rooted in a theory of vision which extended from classical antiquity up to the seventeenth century. This scientific authority (it is only for us that it is pseudo-scientific) undoubtedly accounts for the popularity and extraordinary longevity of this particular literary tradition. (203)

I'd like to suggest that, even if we would now consider the scientific authority underpinning the Aggressive Eye topos to be merely archaic pseudo-science, the tradition perhaps lives on in literary form in the romance genre. Heroes who ask or command heroines to look deep into their eyes seem to be trying to create an emotional connection (they may not at this point think of it as love) between them. When the hero ensures that they orgasm together while looking into each others eyes, he is perhaps trying to join them both physically and optically (body and soul), and in coming together in this way they are perhaps almost literally made, at least for a short space of time, into "one flesh."


The image of the eye is from Wikimedia Commons.
Posted by Laura Vivanco at Monday, December 15, 2008