Sandra Schwab
At the Feminism and Popular Culture Conference last year, Laura gave a paper on "Feminism Revisits Mills & Boon: Second and Third Wave Contexts and Struggles in Two Mills & Boon Lines," in which she argued that

one can find parallels between the social and economic contexts in which many heroines of the M&B 'Modern' / Harlequin Presents line find themselves, and society as critiqued by Second Wave feminists. One could characterise the line as being one where there is conflict between men and women, creating an impression of a battle of the sexes [...]

This conflict between men and women is typically emphasised by an inequality of power and social status at the beginning of a novel: the hero has the advantage because of his wealth and the power it involves,* while the heroine is often less well off and overall in a more vulnerable position than the hero. Yet by the end of the novel, the external and internal conflicts have been overcome and, as Laura wrote in her blog post, the heroine "has achieved sexual fulfillment, equality within marriage and the freedom to pursue her career should she wish to do so." 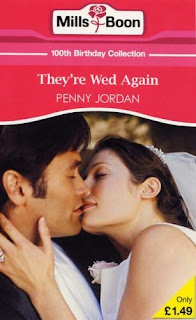 When I read Penny Jordan's They're Wed Again (1999/2008) I was forcibly reminded of Laura's paper, not because Jordan's book is a typical M&B Modern romance, but because it's not. They're Wed Again is a second-chance-at-love story about a divorced couple who meet again before the wedding of the heroine's niece due to a mix-up with the invitations. The story of their marriage is told in flashbacks as both protagonists ponder on what went wrong with their marriage and where they made mistakes. This premise in itself is rather unusual: many second-chance-at-love stories within in the Modern line involve some sort of revenge plot** and a hero who thinks himself wronged by the heroine.

What lay at the root of the protagonists' problems in Jordan's novel is just as unusual because it turns a typical Modern / Presents scenario upside down: "It had been a private joke between them in those early days that she was the one with the large salary and the company car, whilst he was the one still eking out a meagre living on a grant" (Jordan 8). Yet the joke soon turns sour when Luc, the hero, feels more and more inadequate: "'It hurt me that I couldn't afford to provide you with the material things you wanted, that I wasn't the one paying the mortgage, that I couldn't go out and order that bed you wanted ...'" (Jordan 71). The financial inequality in their marriage challenges Luc's masculinity and he feels "demeaned" (Jordan 71) because he cannot not fulfill the traditional role of the provider and breadwinner in the family. In the intervening years, however, he has come to realise that it was wrong to let old gender roles dictate his life:

Certainly it had seemed impossible at the time for them to be able to reconcile their growing differences, but in the years since then his position [he is a Maths professor] had given him plenty of opportunity to observe and consider the changes taking place in the way the sexes related to one another and ran their relationships. (Jordan 53)

In hindsight, he now acknowledges, "If I was proud then it was a false pride. My pride should have been in you, in what you were doing for both of us, in what we are achieving by working together." (Jordan 71)

The heroine, on the other hand, used to be a career woman, and at one point her husband "accused her of putting her career above their marriage" (Jordan 39). But just as Luc now views his behaviour in the past in a different light, so does Belle:

[...] she was beginning to respond to a previously unacknowledged need to allow things into her life other than her work, beginning to admit to a sense of awareness that there were certain things she was missing out on [...] (Jordan 39)

In They're Wed Again Jordan thus explicitly discusses gender relations and makes questions of gender and equal opportunities a central focus of her story. In contrast to many other M&B Modern / Harlequin Presents novels, the battle between the sexes took place in the past (and eventually resulted in the break-up of Luc and Belle's marriage). When the story opens, the protagonists are now equal in all ways, and they have also reached a more balanced view on gender relations and on combining career and family. Thus, one could argue that the problems the protagonists face in the past of the novel are those of Second Wave Feminism, while the present stands for Third Wave Feminism and its struggles. Remarkably, this difference is perceived by the characters themselves. Comparing the young couple whose wedding they will attend, with themselves, Luc says, "'Fortunately his generation has a far healthier and more flexible attitude towards interchanging the traditional roles than ours perhaps did'" (Jordan 48, emphasis mine).

In the paper I mentioned at the beginning of this post, Laura argued that issues of Third Wave Feminism are more likely to be found in another line of Harlequin Mills&Boon: in the Romance line: "The second line I looked at is the 'Romance' line and the heroines of this line find themselves in a context which more closely resembles those in which Third Wave Feminists have reached adulthood." And again, she quoted from the submission guidelines: "the guidelines state that the novels must be 'About a hero and heroine who are equal (they need each other, their strengths and weaknesses balance the other's).'" As I have shown, Jordan's novel transcends these guidelines and combines elements from the Modern / Presents line with those from the Romance line.
~~~~~~~~

* Indeed, many of the M&B Modern heroes are what I call uber-alpha males: they are not only billionaires, no, they are Greek/Italian/Spanish billionaires because it would seem that the blood runs hotter in the veins of men from southern Europe than in those from dear, old England.

** One author who is great with revenge plots is Lynne Graham: see Claiming His Wife and Child, an anthology published as part of the "Queens of Romance" series in 2006. It contains two novels from 2000 and 2001 respectively, One Night with His Wife and Duarte's Child. As the second title implies, there are also secret babies involved.
Posted by Sandra Schwab at Friday, October 03, 2008