My Route From Here 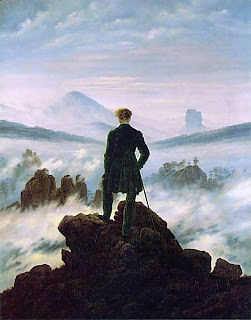 Last week I was in the library, doing research, and it so happened that first I re-read Deborah Lutz's The Dangerous Lover, about "The dangerous beloved [who] hides a secret melancholy interiority that flashes out in passionate violence and rage" (2) and then turned to Julia Wood's article about how women in violent relationships seek to understand them through

western culture’s primary gender narrative, which prescribes and normalizes dominance and superiority for men and deference and dependence for women. Participants also relied on romance narratives – which entailed both fairy tale and dark versions – to make sense of violence in their relationships. (239)

Wood isn't writing specifically about romance novels (though the report here about her article seems to have misunderstood the term "romance narratives" and assumed Wood meant "romance novels"). Wood argues that "Humans rely on narratives to make sense of their lives" (241). These "Narratives are not strictly personal accounts, or stories; instead, they are decisively social, which is to say culturally constructed, sustained, reproduced, and sometimes altered" (241). We can think, for example, of Sternberg's theory of love as a story. According to Wood, "Narratives are most urgently sought when experience does not make sense" (242), such as when a partner becomes abusive:

Immersed in this incoherence, women search out a way to narrate themselves and their experiences. One option is to interpret a relationship so that it is consistent with the culturally favored romance narrative and the gender narrative that infuses it. Entirely compatible with the fairy tale view of romance, the primary gender narrative casts men as domineering, superior, and aggressive and casts women as subordinate, forgiving, loyal, and accommodating. (243)

This sharp difference in possible readings re-echoed in my mind when I read Meriam's recent post about romance and politics:

I’ve always considered romance a bloodthirsty genre, rarely shying away from the gory details of a violent death or torture scene (recalling an early Nora Roberts’ thriller still makes me blanch). I’ve read romance novels that deal with rape and domestic abuse and child molestation. Blood and lust go hand in hand with love and romance. [...]

For such a highly politicized genre (I think romance is all about the negotiation of power) romance is also a genre that tends to steer clear of overtly political stances, or straightforward social commentary.

The problem with introducing age-differences, political views, race and social commentary is that:

a) They are polarising. A significant number of readers are turned off by the inclusion of these in a genre they read for escape.

But what happens if, as is the case for RfP, "A lot of romances strike me as political, though I’m not always sure the author is aware of the strength of the subtext"? How then do you find "escape" when the texts you read present you with subtexts you find politically or culturally problematic? I also wonder if the fact that so many of them have been written by authors, and for readers, who live in a different cultural context from mine often makes those subtexts even more obvious (because less normal and comfortable) to me. As Jules Jones recently wrote,

The US and the UK have a lot of things in common, including (more or less) a language. But now and then you trip over something where the culture is so wildly different that people on one side or the other may not even be able to grasp how utterly different the other culture is.

Whatever the reason, I feel like I'm tripping over quite a few things in romances. I'm getting so sensitised to the many elements which I read as political but which for the target audience are presumably the "norm" or are aspirational elements, that I feel distanced from a lot of romances and am finding it more and more difficult to read them for "escape." Instead, I can't stop myself thinking about the subtexts of these romances.

I picked up Mary Balogh's No Man's Mistress recently, skipped to the back (I sometimes read the endings of romances first when I'm unsure of what to expect) and was horrified by this scene in which the hero, Ferdinand, punishes Kirby, the man who forced the heroine into prostitution:

Kirby merely covered his injured nose with both hands.
"I am a peaceable man," he wailed.
And so it was punishment pure and simple. And coldly and scientifically meted out. It would have been easy to render him unconscious with a few powerful blows. And it would have been easy to pity a man whose physical stature and condition gave him no chance whatsoever of winning the fight. But Ferdinand did not allow himself either the luxury of fury or the weakness of pity.
This was not for himself or for the spectators. This was not sport.
This was for Viola.
He had said he was her champion. He would avenge her, then, in the only way he could, inadequate as it was - with his physical strength.
She was his lady, and this was for her.
The spectators had grown strangely quiet and Ferdinand's knuckles on both hands were red and raw by the time he judged Daniel Kirby to be within the proverbial inch of his life. Only then did he draw back his right fist and drive it up beneath the man's chin with enough force to send him into oblivion. (332)

I'd call that torture. According to the Convention against Torture and Other Cruel, Inhuman or Degrading Treatment or Punishment

the term "torture" means any act by which severe pain or suffering, whether physical or mental, is intentionally inflicted on a person for such purposes as [...] punishing him for an act he or a third person has committed or is suspected of having committed, [...] when such pain or suffering is inflicted by or at the instigation of or with the consent or acquiescence of a public official or other person acting in an official capacity.

Technically Ferdinand is not acting in an official capacity, but the fact that this scene takes place in the presence of "fifty or so [...] chosen witnesses [...] By now there is probably no one in the ton who does not know. [...] Everyone knows that the villain who preyed upon you has been publicly humiliated and published" (344-45) means that in the world in which the novel is set, he is the instrument of justice. It's not an uncommon in romance novels for the hero to be cast as the defender of the heroine and the one who administers violence to those who have attacked her, but it's hardly unproblematic. As Elizabeth has observed 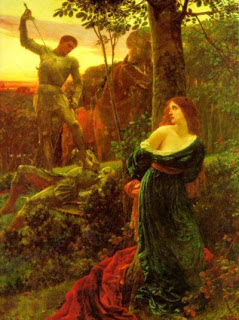 Men’s protection can be welcome, valuable, even life saving. Yet in the end, this chivalry reinforces the idea that women are only safe if under male protection. The flip side of this coin is that women outside of male protection are fair game, a threat that is often targeted in very particular ways at openly lesbian women. Either way, women’s voice in consent is lost. Ignored by this equation is the fact that sexual violence is a crime overwhelmingly committed by intimates and acquaintances.

Or as Wood puts it,

The established gender narrative defines women as needing men. Women are waiting to be rescued, waiting to have their lives and themselves completed by a man. [...] They are socialized to believe that their value and happiness depend on ‘catching a man.’ Women who accept the gender narrative that links their self-worth inextricably to having a male partner are at risk for believing that they must sustain romantic relationships, even destructive ones. (243)

I've always been aware of the variety that exists within the genre and I know that I cannot possibly read every single romance written, so even if I avoid the novels whose depictions of gender roles, violence or politics I find problematic, I can still find lots of romances to read and enjoy on an emotional level, and the ones that I find problematic may still provide fodder for thought and analysis. However, I'm not sure that a blog's the best place for me to do that analysis. I know that by "thinking out loud" as I'm doing in this post, I may offend some people (e.g. readers who loved Balogh's novel), and because a blog post is written relatively quickly, I won't have had the time or resources to put together all the evidence required to bring sub-texts to the surface and fully examine them. In addition, I think I'd prefer to focus on other aspects of the genre or individual romances which I find more enjoyable, but even with them I'm finding that I want to spend more time and exploring the issues and the novels in detail than is really desirable on a blog.

Looking back on my blog posts here, I've noticed that I've gradually been writing more and more in individual posts, and posting less frequently. I think I've now reached the point where I'll only write long blog posts occasionally, and spend more time writing full-length essays (in the hope that by the time I've finished them, there will be a suitable journal in which to publish them). I'll have to see if I can relearn the art of writing short blog posts on topics which don't ask to be expanded into essays.
The first painting is Caspar David Friedrich's Wanderer Above the Sea of Fog, from Wikipedia. Whatever the original meaning of it was, I read it as an individual looking forwards and spotting the issues which, although they're usually submerged beneath the sea of fog, sometimes partially emerge from it and hint at the amount of subtext that lurks below.

The second painting is "Chivalry" (1885) by Sir Frank Dicksee, from Wikimedia Commons.
Posted by Laura Vivanco at Tuesday, May 20, 2008