The metaromance for today is Hannah Bernard’s The Marriage Adventure. Unfortunately, according to a cached version of her website, she has now ‘retired from romance writing and turned to another career’. This was, as far as I know, her last published romance. The metaromance element both deepens the characterisation and gives the reader a little bit of insight into a novelist’s creative processes.

Maria, the heroine, ‘started out illustrating other people’s books, but now I’m working on writing them as well. It’s a challenge.’ (2005: 21). And she’s having a few problems:

“I have most of the story down in my head, except for the very ending, and some minor issues.” She sighed. “Well, a huge issue, actually.” [...] “The hero. I can’t get him to materialize properly on the paper.” She looked at Eddie and frowned, trying again to picture Marius. Eddie raised an eyebrow in question and his face was superimposed on her mental picture of Marius.
Yes! (2005: 22-23)

The heroine of Amanda Quick’s Wait Until Midnight has had both a similar problem and a similar sudden burst of inspiration when she spots the hero: ‘No doubt about it; he was a perfect model for the character of Edmund Drake’ (2004: 11) who ‘is very important to the story but I have been having difficulty getting him down properly on paper. There has been something rather vague about him, I’m afraid. He requires sharpening up’ (2004: 30).

Of course many novels come with the legal disclaimer that:

All the characters in this book have no existence outside the imagination of the author, and have no relation whatsoever to anyone bearing the same name or names. They are not even distantly inspired by any individual known or unknown to the author, and all the incidents are pure invention.

But be that as it may, authors do seem to get plenty of inspiration from images of individuals ‘known or unknown’ to them, for example, Monica McCarty recently wrote about a couple of male actors who’ve been the inspiration for the descriptions of some of her characters. Another Monica, Monica Jackson, has photos on her website of the man whose face (and body) are those she’s given to Raziq, the djinn, hero of Love’s Potion. There are plenty of other examples, and authors who like to collage may well include photos of real people. But, from what I can tell, authors don’t just cut and paste real people into their writing without making any changes. Their process is like Maria’s drawing, taking elements of the person and then merging them with something else to create a composite which is rather different from the original:

She’d always preferred to use human models, even if her characters were anthropomorphic animals. She liked to catch a person’s personality and transform it to paper in a figure completely different from the model. [...] Usually it was impossible to see who the drawn figure was based on – but there was something she needed from her human models.
Perhaps a soul. (2005: 57)

Another aspect of Maria’s problems with her story also remind me of what I’ve read about some authors’ creative process:

Sometimes the characters seem to lead the author in a new direction from the one she’d expected. At other times authors can actually encourage their characters to speak to them and change the plot, for example, one technique used by some authors is to interview their characters.

So, back to Eddie/Marius. Maria had a crush on Eddie when she was a teenager, but he was a few years older and went off to explore the world, leaving her behind. Now he’s come home and, as Marius, has taken up a starring role in the picture-book she’s writing. Here Maria tells Eddie a bit more about Marius:

The description sets up parallels between Marius and Eddie. Eddie has come home to help his sister, who has an autistic son, and in taking that responsibility, and planning to run an adventure-holiday company, he’s just starting his life as a ‘hero’. And then we have his heroine:

“And his lady is another penguin, I presume?”
“No. Viola is a swan.” [...]
“Marius is a bit depressed because he’s having a hard time getting her to notice him. You know. She’s a swan after all. Her head is too high up on that long neck. [...]
“Poor Marius. Unrequited love. But he’s rescuing her from the evil dragon anyway?”
“Of course. Marius loves a challenge. He’s hoping she might notice him after he saves her from being broiled by the dragon’s fire” [...]
“Viola is on a quest of her own. She’s searching for the perfect feather (2005: 98-100)

Maria has always thought of herself as different from both her parents and Eddie, because they’re adventurous and she’s not. In a way, she’s the ugly duckling of the group, the one who never seemed to fit in. But, of course, the ugly duckling isn’t a duckling at all, and while she might not make a good duck, she makes a very fine swan indeed. As Eddie says, ‘You don’t have to measure yourself by their standards! You’re smart and talented and beautiful...’ (2005: 177). She, however, thinks that she and Eddie, just like a swan and a penguin, are too different for a relationship between them to work: ‘We’re total opposites’ (2005: 148). But, just as Viola and Marius are both water birds, so Maria and Eddie both have an ‘adventurer’s spirit’, it’s just that Maria ‘liked working on adventures inside her head’ (2005: 22). 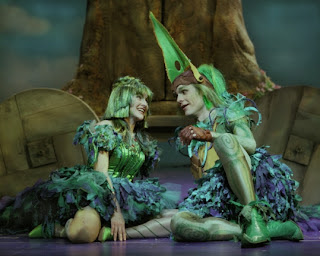 Maria, like Viola, is apparently in need of rescuing. She’s planning to do a parachute jump, despite the fact that this terrifies her, because she doesn’t want to admit defeat and admit that she will never live up to what she thinks are her parents’ expectations. The jump is, for her, the equivalent of a dragon’s fire or a dangerous quest. And she would very much like Eddie to be in love with her. You do have to wonder if the choice of name (Marius, which is rather similar to Maria) is a reflection of how Maria feels about Marius. She wants them (or rather, her and Marius's real-life counterpart) to be a pair, just like Mozart's Papageno and Papagena, who, while not birds, are a bird-catcher and his beloved. And although Maria doesn’t make the connection between her behaviour and Viola’s, Eddie does:

Eddie’s right about both Maria and Viola. And so, at last, both stories conclude happily:

“Marius discovers that Viola’s long journey, and all her perils were made for one purpose – finding the feather he’d admired so much so she could give it to him.”
“So she did it all for him?”
“Yes. [...] She was just too afraid of rejection. So she pretended never to notice him.” (2005: 184)

The Marriage Adventure is only a short romance, 184 pages, in the Mills & Boon Tender Romance line, but the use of the metafictional device, by providing a commentary on the feelings of the heroine in a way that shows, rather than tells, gives it a depth it might otherwise have lacked. Or maybe the truth is that I just have a soft spot for Marius the penguin.

The photo of Papagena and Papageno was taken from the website of Opera Japonica. I used to have just a link to the photo on their site, but they currently have a new site under construction, and so quite a lot of people came here looking for the photo (which I think is a particularly good one) and couldn't find it. Here's a link to the original location of the photo of Pagageno and Papagena. I hope they don't mind me putting it on this page temporarily, so that other people can admire it. Sometimes that link works, and sometimes it doesn't.
Posted by Laura Vivanco at Thursday, July 27, 2006