"We all want to be gods" 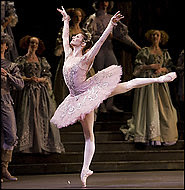 Pam's paragraph about Sleeping Beauty (scroll down and you'll see it) contains this apercu:

There's an entire act in which Aurora is courted by four suitors, but she spends this act on pointe, balanced, unsupported. This is an exaggeration, but she really does an amazing number of unpartnered balances on pointe. All this in celebration of her 16th birthday, and her entry into womanhood. She's all we care about. She's the only thing worth watching, despite the considerable spectacle of the production.

This reminds me quite poignantly of a comment by Lizzie Potts, the romance writer / fairy godmother of Sarah Bird's The Boyfriend School, one of the novels I teach:

"You know, the football federation. Since we don't have a television set, I haven't experienced this personally, but again and again I hear from my readers that their husbands spend all their free time watching football on television. Now the question is, why?"

"Why do men watch so much football?" I hazarded a guess: "Alien mind control?"

"No. To vicariously experience a potency they've either lost or never known. Sports are the essential drama in Everyman's life. His one moment of personal power comes on the playing field. Or, if it doesn't, he dreams of it. Dreams of being the quarterback and making the tackle that wins the game and, by extension, the fair maidens.

"The fair maidens, meanwhile, also dream their dream of power. They dream of love. Their moment comes during those few brief years when nature brings them into full breeding allure. For the first time, they have the power to turn a boy's fancy.

"God's teeth, modern life is queer, isn't it?" she asked. "He's off watching some football tournament dreaming of being seventeen again and she has her nose buried in a romance, chasing the same illusion. It all comes down to this, Gretchen: we all want to be the center of the universe. We all want to be gods."