Laura Vivanco recently posted on the differences between the UK and Australian covers of Maisey Yate’s The Highest Price to Pay, suggesting that it is the first Mills & Boon ‘Modern Romance’ title to feature a black protagonist on the cover. Of course, while not of African-Caribbean descent, non-white heroes have long been depicted on ‘Modern Romance’ covers in the figure of the sheikh. Yet the racial politics of sheikh romance covers are not straightforward either. The erotic fetishising of contrasting skin colour is a well-documented trope in both modern and older sheikh romances and is commonly used in ‘Modern Romance’ titles:

Jessica Taylor has written that sheikh romances are one of the few occasions when the colour line is broken in North American category romance (1036). Hsu-Ming Teo observed that the covers of sheikh romances in the 1990s (so before the start of the Mills & Boon ‘Modern Romance’ series in August 2000) emphasised and celebrated racial difference as symbolised through skin tone (250), which seems to correlate with the eroticisation of contrasting skin colour in sheikh romances. Teo’s observations are initially corroborated by Juliet Flesch’s findings that the covers of sheikh romances published in the late 1980s and early 1990s emphasise a contrast between a blonde heroine and a dark hero.

However, Flesch goes on to observe that the covers of later sheikh novels published in the 1990s by the same author reveal less contrast between hero and heroine (214-215). Whilst both Teo and Flesch research novels published in the 1990s, my analysis of novels published from 2000-2009 reveals a surprising shift which correlates with Flesch’s conclusions about later sheikh novels. On the covers of some sheikh titles published in Mills & Boon’s ‘Modern Romance’ series over the past ten years, sheikh heroes have been whitened and a suggestive contrast has arisen between the representation of heroes in the text, where contrasting skin colour is eroticised, and the covers, where the contrast in skin colour is reduced and, in some cases, completely elided. Of the 57 sheikh romances published in the ‘Modern Romance’ series, only six appear to emphasise a contrast in skin colour on the cover (see for example The Desert Sheikh's Captive Wife and Traded to the Sheikh). The six novels which emphasise racial difference seem to be clustered in the two-year period from 2006-2008: Emma Darcy’s Traded to the Sheikh (2006); Sandra Marton’s The Desert Virgin (2006); Jane Porter’s The Sheikh’s Disobedient Bride (2006); Sharon Kendrick’s The Sheikh’s English Bride (2007); Lynne Graham’s The Desert Sheikh’s Captive Wife (2007); and The Sheikh’s Convenient Virgin by Trish Morey (2008). 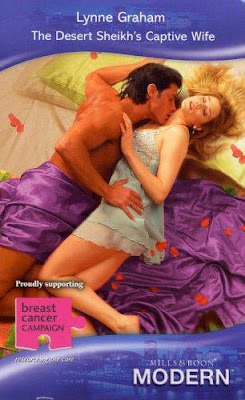 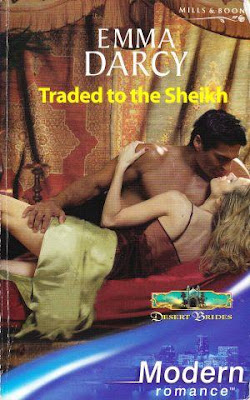 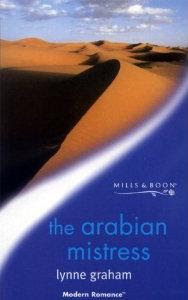 Eighteen covers remove the couple from the cover all together, substituting a desert landscape, which seemed to be the preferred format until around 2005 (see The Arabian Mistress); 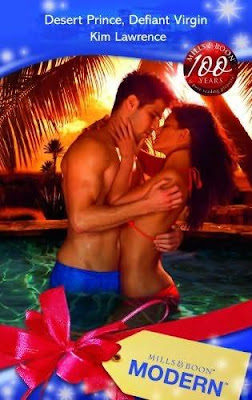 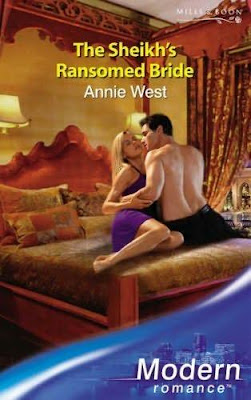 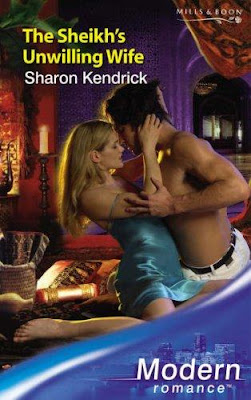 and nine covers have a slight, discernable difference, but which is not the main focus of the cover (see The Sheikh's Unwilling Wife).

Many of the covers are unique to sheikh romances published in the UK; although the same titles are published in North America and Australia, it is only since Miranda Lee's Love-Slave to the Sheikh (2006) that the UK covers have used the same images as the North American 'Harlequin Presents...' and the Australian 'Sexy' covers.

There seems to be no correlation between the skin colour of the sheikh hero on the cover and in the text. For example, Annie West's The Sheikh’s Ransomed Bride describes how the heroine’s ‘breath stopped at the sight of him there, one large, tanned hand on her pale skin’ (147), yet the cover indicates no difference in skin colour between hero and heroine. In the text, their contrasting skin colour is eroticised, but on the covers, the sheikh’s ability to assimilate into (white) western culture is more prominent. This seems to reveal a paradox within these romances: a desire for difference, but an insistence on sameness.

This paradox is of course reflected in the sheikh hero’s hybridity, he has often been educated in the West, and may have Western (European, North American or Australian) parentage. Marketing a romance novel with a Middle Eastern hero at a time of political instability and western military engagement in the Middle East and North Africa could be seen as risky, therefore Mills & Boon may be attempting to solve this by emphasising the hero’s hybridity on the cover. Yet if the whitening of sheikh heroes on the covers is reflective of this hybridity, it seems odd that this would not be the case in the novels themselves, where the contrast in skin colour between the hero and heroine is regularly highlighted.

Perhaps what these covers indicate is that ‘sheikh-ness’ doesn’t necessarily have to come from the skin colour of the hero but can be indicated in other ways. For example, on the cover of The Sheikh’s Ransomed Bride the display of fabric, wood carving on the bed frame, a stone archway and a pool are Orientalist markers which signify the ethnic identity of the sheikh as well as his geographical locus in the east. The cover of The Sheikh's Unwilling Wife is similarly clear in its use of markers of ethnicity, displaying stone arches behind the hero and heroine, and tokenistic Orientalist markers in the candle, pouring jug, vase and basket. These serve to indicate that although his skin seems to be white, the hero on the cover is still a sheikh. This may also be achieved by the novels’ title; ‘Modern Romance’ sheikh novels are the only subgenre which always indicate that the hero’s identity by using the words ‘sheikh’ (e.g. Sandra Marton’s The Sheikh’s Wayward Wife (2008)), ‘Sultan’ (The Sultan’s Virgin Bride by Sarah Morgan (2006)), ‘Desert’ (Annie West’s The Desert King’s Pregnant Wife (2008)) or Arabian (The Arabian Love-Child by Michelle Reid (2002)). So it is racial, not ethnic difference which is removed in the whitening of the sheikh hero, which begs the question: if it is not skin colour, what makes a sheikh?