Escaping into Amish and Mennonite Romance 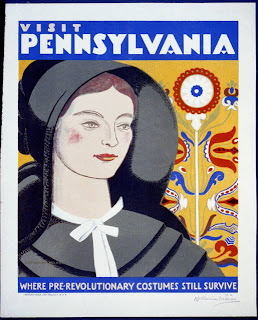 In the past we've discussed values in romance and escapism. Values are very obviously present in inspirational (religious) romances and there can be an escapist aspect to them too:

When the hustle and bustle of life in the twenty-first century starts to overwhelm them, many readers nowadays are finding escape in novels that deal with a simpler life. A life without cell phones and iPods. A community without TVs and cars. A place where gas lamps and horse-drawn carriages are still ways of life. But it’s not historical fiction they’re reading. The stories are set in the present day but focus on the Amish communities that dot states like Pennsylvania and Ohio. (Rodmell)

Amish and Mennonite romances attracted quite a lot of media and academic attention last year. There was an article about them in Bloomberg Businessweek in July 2010:

The most popular microtrends of the moment are Amish- and Mennonite-themed romances, which covered the best-seller lists last fall like a giant head scarf. What was considered a holiday season fad has persisted—and even narrowed. "I have noticed a new trend within the Mennonite genre toward Amana romances," says author Cindy Woodsmall, whose books have appeared on The New York Times' mass-market fiction best-seller list, referring to an ultraconservative strain of Amish. (Morgan)

Then in August they were the subject of an article in USA Today, in which Deirdre Donahue quoted Teach Me Tonight's Pamela Regis:

With Amish inspirationals, which are shelved under "religious fiction" in bookstores like Barnes & Noble, "readers get to peer inside the Amish community, and it is not like our own community," says McDaniel College English professor Pamela Regis, author of A Natural History of the Romance Novel. "Simplicity is a hallmark of that community, and simplicity is powerful." [...] Professor Regis points out that since the 19th century, American women have devoured sentimental novels celebrating faith and family, hearth and home. But unlike, say, Little House on the Prairie, fans don't need to time- travel to see the Amish. They only need visit tourist-friendly Lancaster, Pa., to witness the Amish in action, which adds to the genre's allure.

Analysis of this romance sub-genre also made its way into Volume 2.4 of the Journal of the Center for Mennonite Writing (July 2010). The volume includes two articles on the sub-genre and a bibliography of "Mennonite and Amish Serial Fiction," which lists a variety of series, including novels which

fall within the category irreverently called “chick lit” by critics, or, in this case, “bonnet lit,” alluding to the severe head coverings worn by most of the young Mennonite and Amish heroines of these romances, which are usually set in a pastoral countryside. (Beck)

Three bonnet-romance writers – Beverly Lewis, Wanda Brunstetter and Cindy Woodsmall – are New York Times best-selling authors. Other writers in this genre routinely make the best-selling lists of Christian booksellers. For example, 10 of the top 25 Christian fiction books for 2009 are Amish romances, according to ChristianBooks.com, one of three major Christian book retailers.

Michelle Thurlow observes that there are older precursors of the contemporary wave of "bonnet romances," including "The Masquerading of Margaret (1908) by social progressive Cora Gottschalk Welty," "Anna Balmer Myers' Amanda (1921), Joseph Yoder's Rosanna of the Amish (1940), and 'Carolyn Keene's' Nancy Drew mystery The Witch Tree Symbol (ghostwritten by Harriet Stratemeyer Adams, 1955)." Her article, however, focuses on just one recent series, by Beverly Lewis, whose books "have finally propelled the Amish novel into a genre of its own."

Issues of faith are, of course, extremely important in this sub-genre, as in all inspirational romances, so it seems important to note that Lewis's

books have been banned in some ordnungs, or church rules, in Ohio and Pennsylvania due to theological differences. Though Lewis quietly sidesteps interrogating some of the more controversial aspects of Amish culture (e.g., division of labor between men and women, prohibition of higher education), she is unabashedly evangelical in her presentation of the Gospel in her works. As the daughter of an Assemblies of God pastor and an active member of that church, Lewis allows her characters to attend Bible studies, pray charismatic prayers, and boldly claim salvation in Jesus Christ. Since Old Order Amish soteriology holds that it is prideful for the communion of earthly saints to claim salvation (as opposed to hoping to be saved), one can imagine that some of the more skeptical bishops of das alt Gebrauch (the old way) would see these novels as stalking horses for evangelism. (Thurlow)

Similarly, Graybill suggests that while "many" of the authors of "bonnet" romances "do try, in fact, to get their facts right in relation to the Amish characters they are depicting" nonetheless

all Amish romance authors write out of, and to, a particular evangelical Christian subculture. This can lead to some odd depictions of Amish faith. Amish protagonists agonize about finding God's will for their lives. In many, Jesus comes to them personally through sign or vision. [...] According to reporter Ann Rodgers, who studied Amish fiction for a 2009 story in the Pittsburgh Post Gazette, the biggest criticism noted by her sources was that characters in these novels think and talk too much like standard evangelicals, whose understanding of God’s will tends to be individualistic rather than communal.

The poster, "Visit Pennsylvania Where pre-revolutionary costumes still survive," which depicts the head and shoulders of "a woman in eighteenth-century costume," was created by Katherine Milhous for the "Pennsylvania Art Project, WPA, [between 1936 and 1940]." I downloaded it from the WPA Posters Collection at the Library of Congress. According to the Library of Congress there are "No known restrictions on publication."
Posted by Laura Vivanco at Sunday, July 03, 2011