Laura Vivanco
Sarah has co-edited a volume of essays on "women constructing men", and it includes an essay she's written herself, on the topic of Suzanne Brockmann’s Sam Starrett. I thought it would be interesting to interview her to find out more. But first, here are some details about the volume: 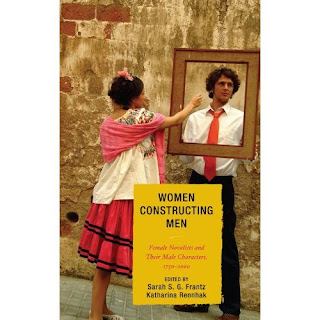 Female novelists have always invested as much narrative energy in constructing their male characters as in envisioning their female. The collected articles in Women Constructing Men demonstrate that the topic of female-authored masculinities not only allows scholars to re-discover almost every novel written by a woman, but also triggers reflections on a host of theoretical questions of gender and genre.

Here's a list of the contents of the volume:
LV: Could you explain very briefly how "the topic of female-authored masculinities [...] allows scholars to re-discover almost every novel written by a woman"?

SSGF: I don't know about the "briefly" part. :) When I first sent out the call for proposals for this book, someone expressed interest in writing about Rochester in Jane Eyre. I did a little bit of research and found one article on MLAB that was focused on Rochester. One. To my mind, very reductively, feminist literary criticism started when it realized that male critics were analyzing female characters in books by men (Pamela, for example) with very little understanding of what it meant to live the female experience. Feminist literary criticism quickly and logically moved from examining female characters written by men to female characters written by women. With the rise in masculinity studies, people began to study male characters written by men from a gendered perspective, as constitutive of gender expectations as much as female characters. But there's a gaping hole there. Very rarely do critics of gender studies and gender creation examine the ways in which female-constructed masculinity is equally as constitutive of gender dynamics as the other three possible permutations. Surely women are revealing a lot about the world as constructed by gender when they create male villains or fathers or brothers or lovers or ideal heroes? There has, up until now, been very little work done on female-authored masculinity. Even authors like Austen have only very recently received extensive evaluation of their construction of ideal masculinity. So Women Constructing Men allowed us to bring together some cutting edge research by some very smart people about the ways in which female novelists--both in the canon and on the fringes--construct masculinity in their books.

LV: The volume spans three continents and 250 years. As you've noted elsewhere, those years include the period during which what came to be known as "the Great Masculine Renunciation" took place:

Gone were the scarlets and purples, satins and velvets, lace and embroidery of conspicuous consumption that men wore in the middle of the eighteenth century. Romantic-era men wore instead dark blue or black wool coats, stiffly starched, blindingly white shirts, and skin-tight, skin-colored pantaloons [...] But this Great Masculine Renunciation entailed more than Romantic era men suddenly realizing that dark blue wool and starched shirts were more masculine than red velvet and pantaloons. Indeed, the ideological work that went into making that realization a reality demonstrates the radical transformation that representations of and assumptions about masculinity experienced in the Romantic era. I argue, in fact, that the total transformation in men's fashions in the Regency era was an outward manifestation of a similar renunciation in men's ability to express their emotions. This emotional change was of particular concern to female authors of novels in which a man and a woman had to fall in love with and express their love to each other--female authors of which Jane Austen was one of the earliest.

For her part, Katharina Rennhak has previously written that

A study of gendered authorial identities around 1800 seems especially promising: As has been shown by recent scholarship, the later phase of the long eighteenth century not only saw the triumphal (discursive) procession of the ideology of separate spheres and (as a consequence?) the beginning of the marginalisation and exclusion of women writers from literary histories; but it was also the time when female novelists were rapidly gaining a significant market share.

But the volume also takes us right up to the end of the twentieth century, and very significant social changes had occurred during the 250-year period. Were there any aspects of women's constructions of men and manhood that remained constant?

SSGF: A fascination with men! The vast majority of women, after all, are attracted to men and enjoy their attentions and want from them companionship and relationships and sex and love. Female novelists, then, get the opportunity to create their own romantic ideal. It's amazing how much time and effort over the centuries that women have put into doing precisely that and its equally amazing to me that this aspect of their writing hasn't yet received sustained study.

I guess something else that's consistent is that women consistently attempt to write ideal men, the perfect mate, the one man who can solve all problems. Sometimes their construct succeeds and everyone lives happily ever after, but often it fails and that spirals everything in the book down into destruction. But the impulse to write Mr. Right is a strong one and seems to be universal.

LV: We were discussing slash fiction and m/m romance recently, and you've mentioned that "the book I will be writing for the next few years is about the power, appeal, and history of the modern American romance hero." Could you tell us a bit more about why you and others find romance heroes so fascinating?

SSGF: Personally, I find romance heroes fascinating AS female constructs. I'm not much interested in male characters written by men. I'm interested in what female authors include when they write a hero. I'm fascinated with why angsty, dark, tortured heroes are so popular. I'm fascinated with what we, as woman, consider ideal, with what we consider attractive in a romance hero vs. what we'd like in real life mate. And I'd have to say I'm not alone, considering the success of all the many hero-focused romance series out there. As to why we find them fascinating? Well, we're surrounded by men, we like men, we have to work with men every day, and I think the ideation of good and bad men is a way to work through issues in our lives and relationships.

LV: Sarah, you summarised Brockmann's oeuvre in an article published in Teaching American Literature in 2008 and you've written elsewhere that

A game I like to play in all of Brockmann’s books is finding the tears. Because Brockmann’s heroes like to cry. The entire of personality of her most famous character, Sam Starrett, and his love affair with Alyssa is built around his relationship to his own tears, and they’re pretty powerful stuff.

Is it Sam's tears that make him your "Ideal Romance Hero"?

SSGF: Heh. Well, the famous scene in Over the Edge when Alyssa finds him crying after he's torn up his room is quite wonderful, to be sure. I guess I like vulnerability in my heroes, the proof that they can be moved. And I really enjoy seeing how Brockmann plays with her heroes' tears now. But my article on Sam is about how Brockmann uses him to explore the romance hero tropes (rapist hero, rake, the unforgettable former lover, and the superhero), only to discard them all as inappropriate to a truly heroic masculinity. I show how "a true, lasting masculinity, deserving of a happy ending, cannot be built without love as its foundation," which is a really sweeping thing to say, I know, but it's the conclusion of my paper and I think it does a pretty good job of showing how I get to that point. Overall, I'm very proud of the book as a whole. I think it does a wonderful job of showing what can be done if we open our eyes to female-authored masculinity and I'm very interested in what might happen to the field in the future. And thanks for this lovely interview!

LV: Thank you for telling us more about Women Constructing Men!
-----