Joanna Russ on Slash Fiction
K. A. Laity
K. A. Laity is both a fiction writer and an academic scholar. Her short story collection Unikirja (Aino Press), for which she won a Eureka Short Story fellowship and a Finlandia Foundation grant, grew out of her love for Finnish myth and folklore. She writes and presents scholarly essays on medieval literature and culture, gender, film and comics. As C. Margery Kempe, she is also a writer of erotic romance such as Chastity Flame (Ravenous Romance), Spinning Gold (Noble Romance), Sex Cymbals (Freya's Bower) and many more. In response to a recent post at Teach Me Tonight, K. A. Laity responded that

people writing about M/M romance and slash fiction really should read Joanna Russ's far-too-seldom read piece on it in her unfortunately OOP collection Magic Mommas, Trembling Sisters, Puritans & Perverts (1985). Very insightful about how readers tend to use these M/M pairings in fan fic.

One of the moments in romantic scholarship herstory that gets too often overlooked, is the work by "the first openly gay, feminist spitfire of fantasy and speculative fiction," Joanna Russ. To be fair, much of Russ' work has been overlooked for far too long because of the lingering reputation of her work as "difficult"—particularly her innovative 1975 novel The Female Man. Its taut examination of gender roles and intertwined time lines, which challenged readers upon its release, now fit easily into the mainstream of postmodern literature. 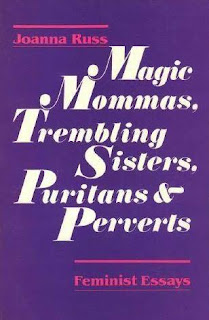 Magic Mommas, Trembling Sisters, Puritans & Perverts: Feminist Essays was written when the MacKinnonite anti-pornography movement had reached its peak. In the collection, Russ not only writes about her own process of coming out and the cultural forces that mitigated against it, but also about the larger questions of pornography and female desire. While the entire collection makes fascinating reading, I want to focus on the chapter "Pornography By Women For Women, With Love" as it provides some interesting roots for the ongoing academic dissections of romance writing today and its sometime step-sister, slash fiction. Russ draws specific parallels between the two genres.

Russ examines Kirk/Spock slash fiction, which was still largely unknown at the time beyond its practitioners. She finds herself delighted that "all of the editors, writers and readers are women" and finds that fans portray Spock and Kirk "like Tristan and Iseult, the two are fated to love" (81). Russ compares the focus on postponement of desire to romance novels of the time, where "the lovers must be pushed together by some force outside themselves" and "somebody is always bleeding or feverish or concussed or mutilated or amnesiac." This element is key, Russ argues, for "the stories over and over set up situations in which the two are not responsible" (82), allowing them to give in to the urges that society—or more often, their own scruples—would condemn.

While the pairing appears to be M/M, due to the actors involved, it's important to remember that it is a human/alien pairing. Referring to Lamb and Veith [Lamb, Patricia Frazer, and Diana L. Veith. "Romantic Myth, Transcendence, and Star Trek Zines." Erotic Universe: Sexuality and Fantastic Literature. Ed. Donald Palumbo. New York: Greenwood P, 1986. 235-56.], Russ reminds us that Spock's "alienness is a way of 'coding' into the K/S fantasies that their subject is not a homosexual love affair between two men, but love and sex as women want them" (83). This is key to the appeal of slash, but also perhaps to that of the modern M/M romance. Russ points out that the traditionally masculine and feminine traits fluctuate between the characters, creating an ideal relationship:

Neither has to give up 'his' work in the world; both have adventure and love; telepathy provides lifelong commitment and the means of making such a union unbreakable and extremely intimate; and while both partners are 'masculine' in the sense of being active in the world, they provide tenderness and nurturance for each other in a very 'feminine' way. And the sex is marvelous. (84)

Why use male characters then? Russ agrees with Lamb and Veith's conclusion that no one "can imagine a man and a woman having the same multiplex, worthy, androgynous relationship, or the same completely intimate commitment" (84). While we might hope that things may have changed since 1985, I suspect the plethora of supernatural titles that have made paranormal romance the pre-eminent genre suggest that this is still not possible for many to envision that kind of relationship with human males.

In part, Russ believes, this sexual fantasy, which commonly relies on the repeating "hurt-comfort" motif, developed because "we have—ingeniously, tenaciously, and very creatively—sexualized our female situation and training, and made out of the restrictions of the patriarchy our own sexual cues" (86). But she also makes clear that "sexual fantasy can't be taken at face value" and that the situations depicted in K/S stories are not ones the readers and writers would like to actually experience, just like the rape fantasies of the earlier bodice-rippers. "We know that women don't want to be raped; episodes in female fantasies that look like rapes really are something else, i.e. Will somebody, something, for heaven's sake, enable me to act?" (88). Russ ties male rape fantasies to the same patriarchal restrictions, exacerbated in the States by the tendency to substitute violence for sexual enjoyment in popular narratives.

And as scientists would agree even now, Russ is right on target when she writes that "we do not have nearly enough knowledge about female sexuality" (94). What she is certain of is that slash fiction offers something "raw, blatantly female and very valuable and exciting" (95). It also offers an important insight on the popularity of M/M romance and the reasons women choose that palette, though it still skirts the issue of the exploitative aspects of that appropriation. For Russ, the appeal is clear:

What they do want is sexual intensity, sexual enjoyment, the freedom to choose, a love that is entirely free of the culture's whole discourse of gender and sex roles, and a situation in which it is safe to let go and allow oneself to become emotionally and sexually vulnerable. (89)

The continued popularity of M/M slash and romance suggests that even in 2010, it is still difficult for women to imagine that happening between heterosexual couples.
Posted by Laura Vivanco at Sunday, January 24, 2010