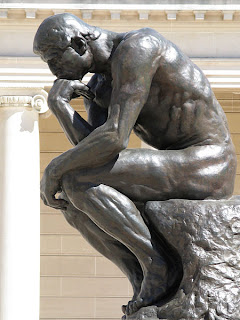 We’ve had emo-alphas forever. But what we haven’t had is the totally-spelled-out-and-explained-in-words-of-one-syllable emo-alpha, the emo-alpha male who is no longer a mystery. How can he be, when he’s telling you about himself all the time? [...]

Clearly the in-your-face, obvious, wordy explanations of the hero and his angst/pain/redemption work for a lot of readers. They don’t work for me.

And that’s why, henceforth, I’ll nod my head when people rave about the next book with the emo-alpha hero. I know what they’re talking about now, and I know why they like it. But I’ll pass, thanks. I like my authors to leave me some of the emotional and cognitive work. (Sunita at Vacuous Minx)

When I read Jennifer L. Barnes's recent article about "Fiction, Imagination, and Social Cognition" I was reminded of Sunita's insight into the differences between romances which demand a fair amount of "cognitive work" and others in which the characters' emotions are spelled out. Barnes observes that


Zunshine (2006) put forth the theory that fiction is pervasive and appealing because fictional stories feed a ‘‘hungry’’ or ‘‘greedy’’ mechanism for getting inside the minds of others, often referred to as ‘‘Theory of Mind.’’ We watch films and read books, she would contend, because we have a need to process mental states: we want to hear stories about people, imaginary or not, so that we can imagine, think about, and dissect their mental states and relationships. (300)

Barnes suggests that "autism spectrum conditions (ASC),particularly high functioning autism and Asperger Syndrome, should be of great interest to researchers exploring the cognitive science of fiction" (301) because they "may provide an ideal test case for many theories of fiction" (301).

It would seem that individuals with ASC are less able to do the kind of "emotional and cognitive work" which Sunita enjoys:


Individuals with ASC were less successful than controls at providing context-specific explanations for characters’ behavior, while they had no such difficulty providing explanations for the events in purely physical stories. (305)


Individuals with ASC may pay attention to what people say, but sometimes fail to grasp what they mean, and it is unclear whether or not they actually find fictional stories– rife with non-literal utterances and complicated social relationships – to be enjoyable or appealing at all. (307)


How many stories in our popular culture hinge on a lie? How many minutes of Grey’s Anatomy or House could a person possibly watch without running into a sarcastic utterance? What would modern fiction look like if every word of dialogue was literally true, if no-one had ulterior motives, if people never attempted to mask what they were feeling, if there were no subtle or complicated social mores? These results seem to support Zunshine (2011)’s claim that consuming fiction not only requires complex theory of mind skills, but that fiction itself bears the indelible stamp of an audience hungry for embedded mental states: he thinks that she thinks that he doesn’t love her, he’s lying to mislead her about his true motivations, and so on. (306)

Perhaps, though, some fiction is particularly successful because it does lay open the truth of the characters' emotions and so the reader does not have to do so much "emotional and cognitive work"? Perhaps it appeals both to those who find such work difficult, and to those who prefer, at least on occasion, to avoid this kind of work and instead find pleasure in other aspects of the text? Perhaps they allow readers, once again, to enjoy the kinds of insights that were previously achieved through the use of a reliable, omniscient narrator?

The images are from Wikimedia Commons. The first is a photo of "Le Penseur at the California Palace of the Legion of Honor" taken by Yair Haklai and the second is a photograph of Erzsébet Korb's Girl's Portrait (Thinker, Contemplation).