Thoughts on The Cambridge Companion to Popular Fiction 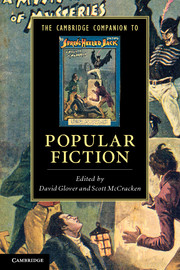 Although romance fiction (and Janice Radway's Reading the Romance) make repeated appearances in the recently published Cambridge Companion to Popular Fiction, romances receive little sustained attention. The same could be said of many other genres, however, for the Companion is attempting to cover a great many different forms of popular fiction (in a variety of media), over a period of more than 200 years and across a range of cultures (though the focus is on fictions from the UK and US) and also discusses readers and the act of reading.

The editors, David Glover and Scott McCracken, state that "In editing this Companion, one of our main aims has been to place the growth and development of contemporary popular fiction in historical perspective" (4-5). Erin A. Smith, for example, mentions that there was an "absence of international copyright before 1891" (143) and Nicola Humble notes that


The idea of reading as ideally something communal survives for a very long time: the image of the family huddled around the hearth listening to the next episode of an exciting story was a key component in the Victorian bourgeois fantasy of the ideal home. Even the reading group proper - the organised regular meeting of non-family members to share their reading or recount their reading experiences - has a much longer history than we might assume. Historians have uncovered evidence of groups of rural women in sixteenth-century France gathering in the evenings to read Le Roman de la Rose. (87-88)

In reading the volume, some of the changes already undergone by popular fiction recall current challenges faced by the publishing industry. For example, David Glover, in his chapter on "Publishing, history, genre," briefly outlines "the dominant role played by the private subscription libraries like Mudie's or W. H. Smith's in supplying what would otherwise be relatively high-priced new novels to the largest pool of regular readers of fiction" (16). Their business model was dependent on the " 'triple-decker' or three-volume format that had become the norm among publishers at the beginning of the nineteenth century" (16). Given the current allegations that


Mr. Shanks, the CEO of Penguin, twice chastised Random House for continuing to sell ebooks under the wholesale model and criticized RH for “not helping the group.” “Mr Shanks also encouraged a large print and e-book retailer to punish the other publisher for not joining Defendants’ conspiracy.  In March 2010, Mr. Shanks sent an email message to an executive of the retailer complaining that the publisher “has chosen to stay on their current model and allow retailers to sell at whatever price they wish.”  Mr. Shanks argued that “[s]ince Penguin is looking out for [your] welfare at what appears to be great costs to us, I would hope that [you] would be equally brutal to Publishers who have thrown in with your competition with obvious disdain for your welfare…I hope you make [the publisher] hurt like Amazon is doing to [the Publisher Defendants].  Likely this is referring to Barnes and Noble. (Dear Author)

it is interesting to note that


the world of the circulating libraries was far less stable than is often supposed. When Mudie's ran into financial difficulties in 1863, a group of publishers put up the lion's share of the money that kept it afloat as a limited liability company. (23)


The tension between the ever-cheaper formats devised for reprints and the high fixed price of the triple-decker was finally resolved by the death of the latter. [...] Faced with a drop in the number of potential subscribers, Mudie's and Smith's [...] attempted to slow the rapidly diminishing shelf-life of their books and to reduce competition from increasingly affordable reprints by pressing publishers not to bring out cheap editions of any of the titles they had sold to the libraries for at least a year - a clash that parallels the twenty-first-century conflict between cinema chains and film companies over the appropriate time-lag between the first showing of a movie and its availability on DVD. But in 1894 the triple-decker was already living on borrowed time and by 1897 it was virtually extinct, a victim of long-term changes in the structure of the fiction market. (24)

Happier parallels between past and present can be detected in the opening paragraph of Nicholas Daly's chapter on "Fiction, theatre and early cinema." We're used to seeing tie-ins between print and film versions of fiction:


It was widely averred in the nineteenth century that the novel was the century's dominant form; indeed, at the end of this period critics spoke of the 'tyranny' of the novel. But this was only a partial truth, insofar as for much of this period the novel maintained complicated symbiotic relationships with other cultural forms, particularly drama: in this respect, popular plots, characters and settings were amphibious, gliding from novel to stage, and, more rarely, from stage to novel. (33)

The "amphibious" nature of popular culture was earlier highlighted in the introduction:


Popular forms such as romance have been remarkably adaptable across cultures and across media. For example, Latin American telenovelas are melodramatic, serialised television dramas with romantic themes that relate to novelas rosas, the Spanish equivalent of anglophone formula romance. While telenovelas have a clear origin and cultural base, starting in Mexico in the 1950s, with Brazil now the biggest producer, their audience now extends beyond the Hispanic population of the Americas to Eastern Europe, Asia and parts of the Middle East and Africa. Some have even been remade for different national audiences. The Colombian, Yo soy Betty la fea, became Ugly Betty in the United States, but there are also versions in at least fifteen other languages. (9)

Glover and McCracken raise a note of caution, however, lest it be assumed that a global market be assumed to imply a homogenous global audience:

One of those questions is raised, but left unanswered, in Kaye Mitchell's discussion of lesbian pulp fictions. She begins by quoting Diane Hamer, who stated that

What distinguishes [Ann] Bannon stories from conventional romance (apart from the gender of her characters is the fact that here, the nature of desire, restless and insatiable, works against this compulsory closure. Instead of the perhaps more comforting endings conventional romance offers its readers, Bannon has captured accurately the contradictory experience of sexuality and desire in her recognition that sexual desire (heterosexual or lesbian) often works against the stability of monogamous coupling. [...]

[...] I will leave open the question of whether popular fictions concerned with sexuality - whether straight or gay - are always marked, in their structural and ideological inconsistencies, by 'the nature of desire, restless and insatiable', or whether it is such fictions that are responsible for producing this particular understanding of desire as, necessarily, uncontainable, uncontrollable, liable to wander. This ultimate refusal of closure/satiation of desire (including readerly desire) always leaves open the possibility of another story and, therefore, of continuing consumption; this explains, in part, popular fiction's investment in seriality. (133)