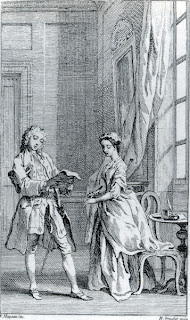 Over at the Popular Romance Project, Pamela Regis reveals what she's been working on recently:

Amy Burge recently "gave a paper to the Centre for Modern Studies Postgraduate Forum at the University of York in a panel entitled 'Feminist Narratives'." The paper, titled "‘Weird and kinky and medieval’: Gender, Sexuality and the Idea of the ‘Medieval’ in Modern Popular Sheikh Romance," is up in full at Amy's blog. Amy observes that


The model used for Mills & Boon’s fictional east appears to be the hypermodern and western-friendly nations of the United Arab Emirates, particularly Dubai, thus providing the requisite exoticism, with none of the restrictions frequently outlined in the contemporary media. Moreover, most Westerners cannot name all of the United Arab Emirates, indicating the ease with which even the real Middle East can become fictionalised. The geographical shift from old colonial obsessions to a new political geography centred around the United Arab Emirates indicates a particular shift in the political tensions of sheikh novels: a liberal ally in the Middle East, but with the medieval (represented in the media by Iran, Iraq and Saudi Arabia) always pushing at the edges.


reveal how deeply rooted ideas about the medieval are in issues relating to gender and sexuality. While you might not necessarily want to call Mills & Boon romances feminist narratives, although some have argued for the feminist credentials of romance novels, the vast majority of Mills & Boon readers and authors are women and romance novels frequently deal with issues commonly affecting women which are often excluded from public discourse, for example, marriage, relationships, children. Furthermore, these are precisely the aspects of sheikh romances which are described as medieval –female sexuality and the treatment of women. But, then, how ‘feminist’ is it to construct ‘medieval’ sexuality as desirable?

In the wake of an article in The Awl in which Maria Bustillos described romances as "feminist documents," Liz Mc2 explained why she doesn't think that's an accurate description:


“by, for and about women” is not the definition of feminist. Not any definition of feminist. Yes, there are lots of debates within feminism, but the definition isn’t content-free, just decide for yourself. Just because a woman chooses something does not make it a feminist choice or exempt from critique from a feminist perspective. Women’s choices can be constrained by society and sometimes by their own conventional views of gender. All-female enterprises can be both empowering in some ways and sexist in others, because they are not separate from the larger, still in some ways sexist culture. College sororities would be one example of this, I think. And I’m pretty sure Romance–individual books, the genre as a whole, and the industry itself–is another. How could it not be?


------
The image is an illustration from Samuel Richardson's Pamela, which Pamela Regis mentions in her post. It came from Wikimedia Commons.
Posted by Laura Vivanco at Thursday, February 23, 2012