Laura Vivanco
Psychologists A. Dana Ménard and Christine Cabrera recently set out to

gain an understanding of how sex and sexuality are portrayed in contemporary romance novels and to determine whether these portrayals have changed over the last 20 years. It was hypothesized that most depictions of sexuality in romance novels would adhere to Western sexual scripts (Gagnon 1977; Gagnon and Simon 1973; Simon and Gagnon 1986, 1987) and that this would not change over time. The sample consisted of books that had won the Romance Writers of America award for best contemporary single-title romance from 1989 to 2009. A quantitative content analysis revealed that hypotheses were supported with respect to characterization of the male and female protagonists, characterization and context of the romantic relationships, and order and nature of sexual behaviours.

I'm a literary critic, not a statistician, but it seems to me that sample size does matter if one is going to try to draw conclusions about an extremely large genre. The findings which Ménard and Cabrera report in "‘Whatever the Approach, Tab B Still Fits into Slot A’: Twenty Years of Sex Scripts in Romance Novels" are based on an analysis of

20 books and a total of 46 sex scenes. It is possible that some findings were non-significant because the relevant statistical tests were simply under-powered.

My own essay about bodies and sexuality in romance novels (which I co-wrote with Kyra Kramer), draws on only 26 primary texts; obviously I do think it's possible to use a sample of this size to demonstrate that certain character types and patterns of behaviour have been present in the genre for a very long time.

If, however, one wants to draw more precise conclusions about how common they are, I think one might want to use a much larger sample. Another important factor to consider is whether the sample is representative. Ménard and Cabrera state that

Rita award winners were chosen because it was thought that these novels might be considered especially representative or prototypical examples of the genre. They may also represent ideal romance novels that other authors might strive to emulate. In addition, the books included in this research sample all sold numerous copies [...]. Selecting Rita award winners may also have enhanced the comparability of books across time.
Single-title contemporary novels (i.e. released individually and taking place after 1945) were chosen because these books were thought to be the most likely to reflect the social mores regarding sex and sexuality at the time of their publication. 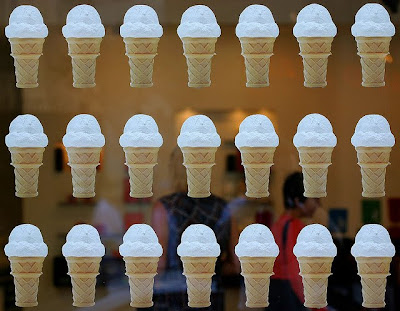 The total number of sex scenes was surprisingly low, given the lay reputation of romance novels; several books published recently included no sex scenes at all. These results may indicate an increasing trend towards less explicit sexual content in romance novels.

It's important to note that Ménard and Cabrera do show some awareness of the limitations of their sample:

Given the small number of books, and the fact that all were Rita award winners, the generalizability of findings from this study is limited to English-language, North American, single-title contemporary romances. [...] It is possible that there may be more diversity in other romance sub-genres; future investigators may wish to compare and contrast sex, sexuality and gender roles across a variety of romance sub-genres (e.g. historical, paranormal, suspense).

--
The photo of the 21 ice-cream cones containing white ice-cream was taken by Thomas Hawk and is available at Flikr under an Attribution-NonCommercial 2.0 Generic licence.
Posted by Laura Vivanco at Thursday, April 21, 2011