Romance in The Cambridge History of the American Novel 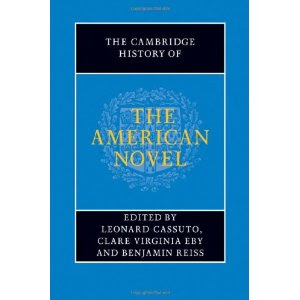 I'm very happy to be able to announce that there's an essay by Teach Me Tonight's Pamela Regis in The Cambridge History of the American Novel (2011). Leonard Cassuto, one of the editors of the volume, observes that

The Cambridge History of the American Novel pays more attention to genre fiction than previous histories of American literature, and it accords them the importance they deserve in the shaping of literary fiction and the history of the American novel generally. If all literary histories ask, “What is ‘literature’?” then this volume argues that the study of popular genres alongside more self-consciously literary productions will help us to answer that question.

The rise of genre fiction is a story that begins early. Eclipsed genres like the sea novel helped to shape books that we read today as literature [...]. And later genres such as the crime novel or science fiction, which flowered in the twentieth century, have cross-pollinated with so-called literary fiction and inspired novelists from Hemingway to Marge Piercy. We have also seen notable entries from within a genre take their places on the high cultural podium.

The critical study of genre fiction begins somewhat later, as it took awhile for scholars to acknowledge the importance of formula-driven fiction as art, or as a source of literary influence and cultural insight. This history devotes chapters to “strong genres”– so called because they register with particular clarity the collectively held beliefs, hopes, and anxieties of the context in which they are produced. (10)

One of those "strong genres" is romance, which Pam examines in a chapter titled ""Female genre fiction in the twentieth century." In it Pam offers the reader "a definition of the romance novel, some categories to advance its literary analysis, and a first effort to place it in literary history, especially in foundational relation to the sentimental literature of the nineteenth century" (848). She includes short analyses of a number of American romances: E.D.E.N. Southworth's Vivia; or The Secret of Power (1857); Kathleen Thompson Norris' Rose of the World (1923); Faith Baldwin's Week-End Marriage (1931); Patricia Highsmith's The Price of Salt (1952); Kathleen E. Woodiwiss's The Flame and the Flower (1972); Jennifer Crusie's Bet Me (2004); Beverly Jenkins' Indigo (1996); Ann Herendeen's Phyllida and the Brotherhood of Philander (2005); and Nora Roberts' Irish Thoroughbred (1981).
----
Posted by Laura Vivanco at Thursday, April 28, 2011