Today at PopCAANZ: Vampires and Listening

Today there were the following talks given at PopCAANZ:

Dr Naja Later has tweeted about the session and I reproduce her tweets below:

Kate Carruthers’ 'No Longer in the Same Vein: the changing nature of vampires in literature and romance':

Carruthers describes it as ‘quite a racy genre from the start’. Vampires are all about sex, but they’re really queer, too. Vampires make vampires through transmogrification and biting, Carruthers notes, a potentially queer trope. 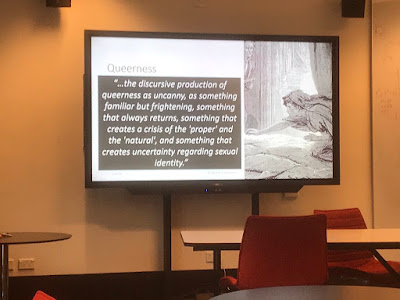 Science and medicine are becoming important elements in vampire narratives. Carruthers identifies a novel emergence of vampires being created by normative birth. Vampire stories like this have an undercurrent of eugenics and ‘improving the breed’. Vampire breeding gets REALLY sticky, as heteronormativity and white supremacy become clear subtexts. 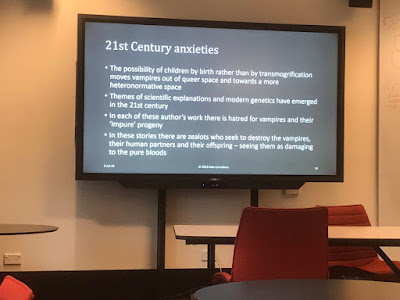 Carruthers takes a close look at the Nazi concept of ‘blood and soil’ and US white supremacist policy to contextualise how reproducing vampires problematise ‘hybridising’.

Jodi McAlister's 'Love and Listening: the erotics of talk in the popular romance novel':

In ‘Faking It,’ @JodiMcA describes how the lead characters share truths as part of their growing intimacy and eroticism. Talk becomes a thrilling part of foreplay. We go back to Jane Eyre as an example of talk as eroticism, particularly talk as a process of equality. A core argument for @JodiMcA is how, in the romance narrative, the hero must come around to the heroine’s way of loving. This also happens in the process of listening. 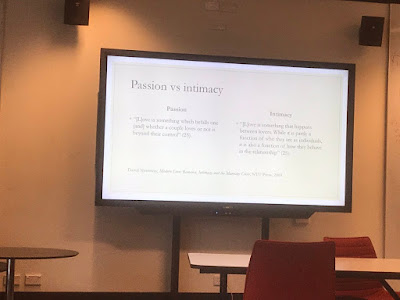 Outlander example: Jamie believes Clare and declares ‘there is truth between us,’ @JodiMcA describes this as an eruption, the barriers dissolving between them. Listening, trust, and respect means that intimacy can build on their passion.
Posted by Laura Vivanco at Wednesday, July 03, 2019