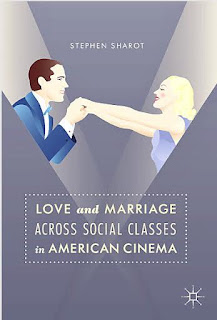 If there are any popular romance scholars looking at cross-class romances, particularly in the first half of the twentieth century, Stephen Sharot's new book, Love and Marriage Across Social Classes in American Cinema (Palgrave Macmillan), may be of interest for comparative purposes. In fact, his first two chapters may be of wider interest because they provide a summary of the social and literary context of ideas and fiction about romantic love:


An essential precondition for the cross-class romance was the emergence of romantic love as a basis for marriage and Chap. 1 traces the diffusion of this value across the class spectrum in the nineteenth century and early twentieth century. Chapter 2 traces motifs of the cross-class romance in literature, from Pamela (1740), considered by many to be the first modern novel, through to the popular American literature of the nineteenth century and early twentieth century, prior to its surge of popularity in American cinema from about 1915. (xv)


Moving on to the specifics of cross-class romance films, Sharot notes that they


were made prodigiously from the beginnings of the feature film around 1915 until the USA entered World War II at the end of 1941. (xi)

Like romance novels, they were primarily written by, and found a primary audience among, women:


The studios expected that cross-class romance films would appeal principally to women and one relevant fact with respect to the filmmakers it that, although almost all producers and directors were male, a relatively large number of script writers were female.(xiv)

This description of the distinction between the social classes also reminds me of the depictions of the working and upper classes in many romances I've come across:


up until about 1919, class in many American films was a matter of position in the mode of production, but in the 1920s and thereafter, Hollywood understood class almost exclusively in terms of levels of consumerism [...]; it was not just the quantity of the items consumed but their nature that had relevance. Some working-class heroines of cross-class romance had to overcome accusations of vulgarity while others demonstrated that they could acquire the appropriate manners and tastes of the upper-class with ease. Classes were distinguished not only by lifestyles but also by moralities. The upper-class relatives of the wealthy male in cross-class romances were often portrayed as snooty, shallow, egoistic, cold, insincere and hypocritical. The working-class families, particularly the men-folk, of poor heroines were sometimes at fault, but the heroine was frequently an exemplar of working-class morality [...]. Working-class heroines and heroes were straightforward, authentic and sincere, with a strong work ethic, personal integrity and good interpersonal relationships. (xiv-xv)